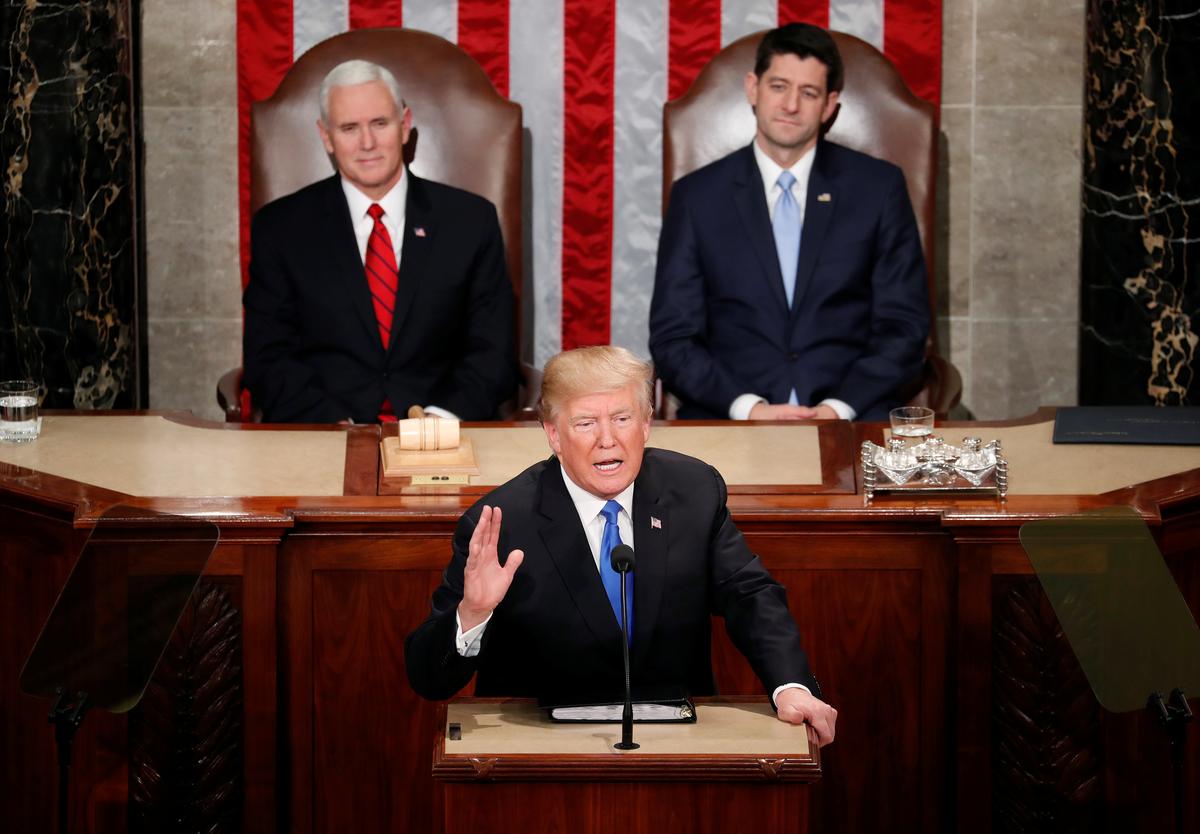 WASHINGTON (Reuters) – U.S. President Donald Trump urged lawmakers on Tuesday to work toward bipartisan compromises, but pushed a hard line on immigration, insisting on a border wall and other concessions from Democrats as part of any deal to protect the children of illegal immigrants.

Ahead of Trump’s State of the Union speech, Democrats had said they hoped to see signs from the president that he would give ground on the contentious issue of whether to shield young immigrants known as “Dreamers” from deportation.

But the president, aiming to keep conservative supporters happy as he looks to November congressional elections, stood by a set of principles opposed by Democrats, including the border wall with Mexico and new restrictions on how many family members that legal immigrants can bring into the United States.

“Tonight, I call upon all of us to set aside our differences, to seek out common ground, and to summon the unity we need to deliver for the people we were elected to serve,” Trump said in his first State of the Union address to Congress.

Trump used the hour-and-20-minute speech, given annually by presidents to Congress, to try to overcome doubts about his presidency at a time when he is battling a probe into his campaign’s alleged ties with Russia and suffering low job approval ratings.

The speech was short on details about Trump’s policy proposals.

There was little sign of unity inside the House of Representatives chamber where Trump spoke. Republican lawmakers cheered wildly at the president’s applause lines. Democrats often sat in their seats silently and many booed when he laid out his immigration proposals.

“We are waging a campaign of maximum pressure to prevent that from happening,” he said.

Trump also said he had signed an order to keep open the U.S. military prison at Guantanamo Bay, Cuba, for detained militants. Democratic President Barack Obama had vowed to close the prison, which has been criticized by human rights groups, but was not able to shut it down completely.

Whether Trump would follow through on his appeal for bipartisan harmony was far from clear. Trump’s past attempts at a unifying message have been undermined by his later rancorous tweets and divisive statements that angered Democrats and frequently annoyed lawmakers in his own Republican Party.

The unity plea will first be put to the test in his drive for a compromise on protecting 1.8 million Dreamers – people brought illegally to the country as children – who face a March 5 deadline on whether they can begin to be deported.

U.S. President Donald Trump delivers his State of the Union address to a joint session of the U.S. Congress on Capitol Hill in Washington, U.S. January 30, 2018. REUTERS/Joshua Roberts

“Words cannot and will not repair the damage he already has done,” Leahy said.

Trump said he was “extending an open hand” for an immigration deal and that he would provide Dreamers a pathway to citizenship over 10 to 12 years in exchange for funding the border wall, which he promised during his campaign, and restrictions on legal immigration.

He called his plan a “down-the-middle compromise,” but some Democrats hissed when he said he wanted to rein in “chain migration,” the ability of legal immigrants to bring a wide-ranging number of family members into the country.

“Let’s come together, set politics aside and finally get the job done,” Trump said.

Trump took credit for U.S. economic gains including a soaring stock market and a low jobless rate. He boasted about the economic growth he believes will result from tax cuts Republicans pushed through Congress late last year.

“This is our new American moment. There has never been a better time to start living the American Dream,” he said.

Trump said he would like a compromise over a plan to rebuild aging roads, bridges and other infrastructure. He said he wanted legislation to generate at least $1.5 trillion through a combination of federal, state and local spending as well as private-sector contributions.

“I am asking both parties to come together to give us the safe, fast, reliable, and modern infrastructure our economy needs and our people deserve,” he said.

Market reaction was muted, with S&P 500 futures drifting higher, but investors saying there was little new for Wall Street in the speech.

“Futures lifted a bit because it was not a negative speech. He was calm. He celebrated America. He avoided his own failures,” said Tim Ghriskey, chief investment officer at Cresset Wealth Advisors in Chicago.

While Trump spoke of compromise, his speech provided some reminders of partisan battles over the past year.

He singled out a speech guest, 12-year-old Preston Sharp, for leading an effort to put American flags on the graves of 40,000 veterans, saying the initiative was “why we proudly stand for the national anthem.”

His belittling of National Football League players who refused to stand for the anthem in protest against police shootings of minorities and racial disparities in the justice system, dominated headlines last autumn.