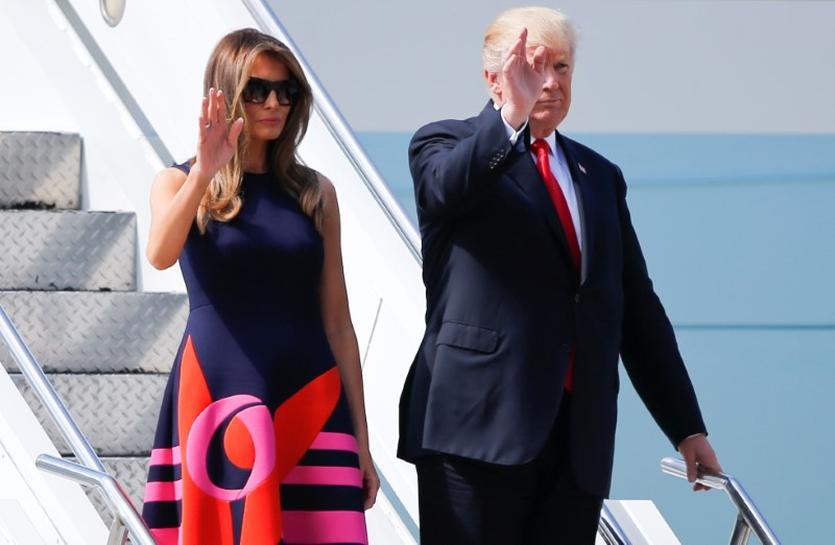 HAMBURG U.S. President Donald Trump arrived for a G20 summit in Hamburg on Thursday risking isolation on climate policy and the wrath of anti-capitalist protesters threatening to disrupt the meeting of the world’s leading economic powers.

Trump, who paused to wave as he descended the steps of Air Force One with his wife Melania, faces a testy confrontation with leaders of the other big G20 economies after deciding last month to pull the United States out of the 2015 Paris climate deal.

Trade policy is another area of contention at the summit, which protesters have vowed to disrupt. “Welcome to Hell” was their greeting for Trump and other world leaders arriving in Hamburg for the two-day meeting which formally starts on Friday.

German Chancellor Angela Merkel, hosting the meeting, said she was committed to an open international trading system, despite fears of U.S. protectionism under the Trump administration.

“We’re united in our will to strengthen multilateral relations at the G20 summit … We need an open society, especially open trade flows,” Merkel, who is running for a fourth term in a September election, said in Berlin.

There were options for finding a solution on climate, she said on her arrival in Hamburg, adding that as the summit’s host she would work to find avenues for compromise.

She and Trump were due to meet on Thursday evening before the leaders begin the full summit on Friday to discuss a raft of issues ranging from climate and trade to migration, support for Africa, and fighting terrorism.

Turkey’s Tayyip Erdogan is among other leaders Merkel will meet.

Trump, who earlier in Poland called again on NATO partners to spend more on defense and said he would confront the threat from North Korea, is also due to hold his first face-to-face meeting with Russian President Vladimir Putin on the sidelines of the summit.

Their meeting, scheduled for Friday, will be closely watched at a time when mutual ties remain strained by U.S. allegations of Russian election hacking, Syria, Ukraine and a U.S. row over Trump associates’ links to Moscow.

Ahead of the meeting, Putin threw his weight behind the Paris accord.

“We see the Paris Agreement as a secure basis for long-term climate regulation founded on international law and we want to make a comprehensive contribution to its implementation,” he told German business daily Handelsblatt.

Thousands of protesters from around Europe, who say the G20 has failed to solve many of the issues threatening world peace, poured into Hamburg to join the main demonstration, dubbed “Welcome to Hell” by the alliance of anti-capitalist groups who organized it.

Police expected around 100,000 protesters in the port city, some 8,000 of whom are deemed by security forces to be ready to commit violence. Up to 20,000 police officers will be on hand for the main demonstration.

As protesters prepared to start their march, hundreds of riot police in full gear lined the main street opposite the Blohm + Voss shipyard where luxury yachts, like Roman Abramovich’s ‘Eclipse’, were built.

Shopkeepers on the street, fearing possible damage to their property, either shut up for the day or bolstered up their windows with wooden planks.

A fire overnight at a luxury Porsche car dealership in the north of the city that damaged eight vehicles could be a foretaste of what was to come. Police said they were investigating whether it was an arson attack linked to the summit.

Locals are unhappy with Merkel’s decision to hold the summit in the center of Germany’s second-largest city to show healthy democracies could tolerate protests, as they are worried about property damage by leftist militants.