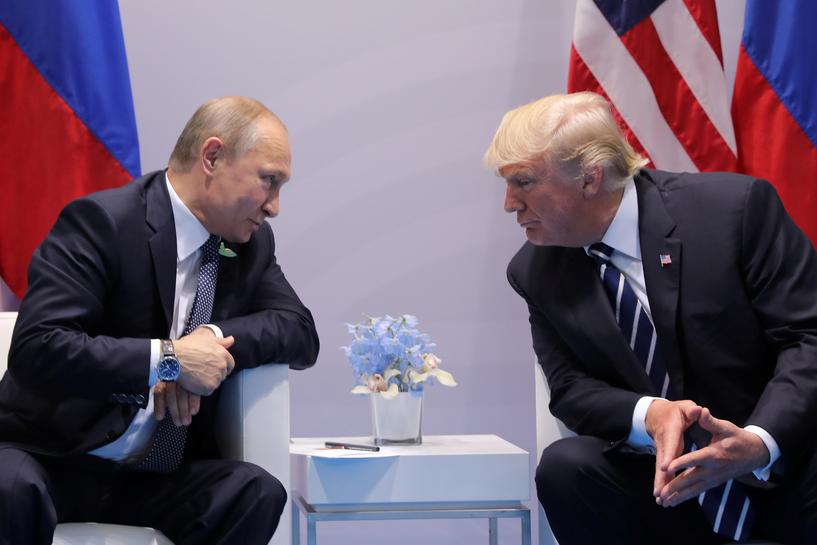 PARIS/WASHINGTON (Reuters) – U.S. President Donald Trump, who is fighting off allegations of ties between his election campaign and Moscow, said he would invite Russian President Vladimir Putin to the White House but that now was not the right time for that.

“I don’t think this is the right time, but the answer is yes, I would,” Trump said when asked if he would extend such an invitation to the Russian leader.

He was speaking to reporters on Air Force One during a flight from the United States to France in comments released by the White House on Thursday.

The Republican president drew criticism last week from Democrats who accused him of not pressing Putin hard enough at a meeting they held in Germany over Moscow’s alleged interference in the 2016 U.S. presidential campaign.

Accusations that Moscow meddled in the election and colluded with the Trump campaign have dominated Trump’s first months in office. Russia denies meddling, and Trump says there was no collusion.

Trump told Reuters in an interview on Wednesday that he had asked Putin if he was involved in Russian interference in the campaign.

Trump said he spent the first 20 or 25 minutes of his more than two-hour meeting with Putin last Friday in Hamburg on the subject.

“I said, ‘Did you do it?’ And he said, ‘No, I did not. Absolutely not.’ I then asked him a second time in a totally different way. He said absolutely not,” Trump said.

U.S. House of Representatives Speaker Paul Ryan on Thursday urged Trump’s eldest son to testify to a congressional committee about the alleged links between Trump’s election team and Russia.

If he testified, Donald Trump Jr. would be the first member of the president’s inner circle of relatives and White House aides to give testimony to congressional investigations into the Russia allegations.

Senate Judiciary Committee Chairman Charles Grassley, a Republican, planned to send a letter on Thursday to the younger Trump to ask him to appear before his committee in a public session, CNN reported.

Ryan, the top-ranking Republican in Congress, told a news conference he supported that.

“I think any witness who’s been asked to testify in Congress should do that,” Ryan said.

Trump Jr. disclosed this week that he had met with a Russian lawyer last year who was said to be offering damaging information on Democratic presidential rival Hillary Clinton.

Trump Jr. eagerly agreed to meet the lawyer, who he was told by an intermediary was part of Moscow’s official support for his father’s campaign, according to emails the son released this week.

The emails were the most concrete evidence that Trump’s campaign might have been willing to accept Russian help to win the election, a subject that has also prompted an investigation by a federal special counsel.

Asked by Reuters on Wednesday if he knew his son was meeting with lawyer Natalia Veselnitskaya in June last year, the president said: “No, that I didn’t know until a couple of days ago when I heard about this.”

He later told reporters on Air Force One that “in fact maybe it was mentioned at some point,” referring to the meeting, adding he was not told it was about Clinton.

Senator Ron Wyden, a Democratic member of the intelligence committee, said it was odd that senior members of Trump’s campaign attended the meeting but that Trump himself said he knew nothing about it until recently.

“How is it was plausible that nobody told then-candidate Trump about it? We’ve got to ask about this. We’ve got to get to the bottom of it,” Wyden told reporters.

Trump said in Paris on Thursday that the lawyer was a private attorney and not a Russian government lawyer, and that nothing of substance came of the meeting.

“My son is a wonderful young man. He took a meeting with a Russian lawyer, not a government lawyer but a Russian lawyer. It was a short meeting. It was a meeting that went very, very quickly, very fast,” he said at a joint news conference with French President Emmanuel Macron.

Trump said it was normal in U.S. politics for campaign teams

to look into allegations about their opponents, as his son agreed to do before the meeting in June 2016.

Watchdog groups filed a complaint against Donald Trump Jr., Trump’s son-in-law, Jared Kushner, and former campaign chief Paul Manafort on Thursday with the Federal Election Commission, which oversees elections, arguing the three violated the law by meeting with the Russian.

Separate from the complaint, the Federal Election Commission – frequently criticized as being paralyzed by partisan deadlock – declined on Thursday to conduct a review of foreign interference in the 2016 election. The five-member commission’s three Republicans said they could not support moving forward because not all the facts were available.

Sessions to recuse himself from the federal investigation into Russian meddling in the election after media reports revealed he held undisclosed meetings with the Russian ambassador to Washington, Sergei Kislyak.

Sessions, who testified to Congress in June about his dealings with Russian officials, released a government form on Thursday dealing with contacts he has had with foreign nationals, including Russian government officials, but much of it was redacted.

66-year-old suspect arrested for stealing cash from 5 stalls at Bukit Merah View hawker centre
Commentary: Why many under 45 are hoping vaccination slots open in June
I. A. Rehman: A titan of human rights.
Hong Kong Launches ‘National Security Education’ Campaign in Schools
The eco-entrepreneurs waging war on plastic pollution in oceans