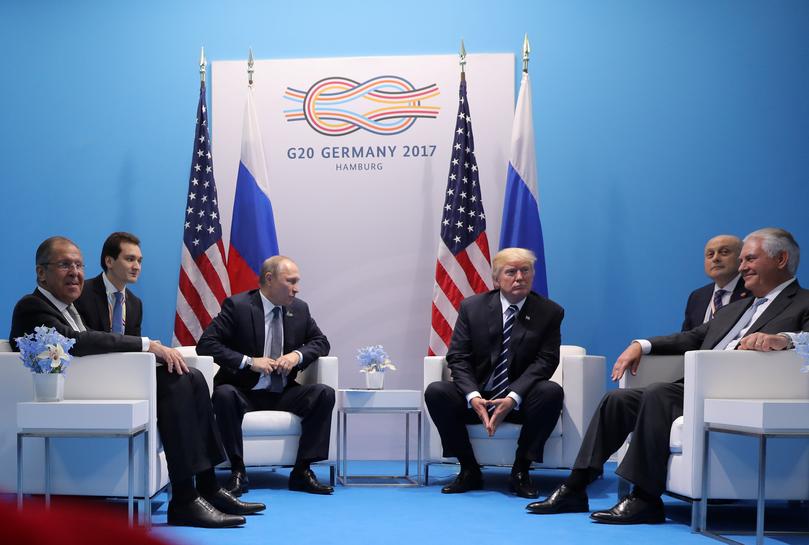 WASHINGTON (Reuters) – U.S. President Donald Trump signed into law new sanctions against Russia on Wednesday but he slammed the legislation as infringing on his powers to shape foreign policy, saying he could make “far better deals” with governments than Congress.

After signing a bill that Congress had approved overwhelmingly last week and which runs counter to his desire to improve relations with Moscow, the Republican president laid out a lengthy list of concerns.

His criticism of the sanctions, which also affect Iran and North Korea, raised the question of how much Trump is prepared to enforce the measures and to pursue action against Russia.

“While I favor tough measures to punish and deter aggressive and destabilizing behavior by Iran, North Korea, and Russia, this legislation is significantly flawed,” Trump said in a formal signing statement.

His hands were tied after the Republican-controlled Congress approved the legislation by such a large margin on Thursday that it would have thwarted any effort by him to veto the bill.

Congress passed the measure to punish the Russian government over interference in the 2016 presidential election, annexation of Ukraine’s Crimea and other perceived violations of international norms.

The legislation has already provoked countermeasures by Russian President Vladimir Putin, who has ordered big cuts to the number of staff at the U.S. diplomatic mission to Russia.

The House of Representatives’ top Democrat, Nancy Pelosi, expressed concern about Trump’s signing statement, saying it “raises serious questions about whether his administration intends to follow the law, or whether he will continue to enable and reward Vladimir Putin’s aggression.”

In the statement, Trump complained about what he said were “clearly unconstitutional provisions” in the legislation relating to presidential powers in setting foreign policy.

The new measure, the first major foreign policy legislation approved by Congress since Trump took office in January, includes a provision allowing the legislature to stop any effort by the president to ease existing sanctions on Russia.

Republican Senator Bob Corker, chairman of the Senate Foreign Relations Committee, said he was not at all concerned with the statement, noting that since Trump had signed the measure, it was now law.

“Whatever. It doesn’t matter to me what the signing statement says,” Corker told reporters. “It’s a good piece of legislation.”

Trump has long said he would like improved ties with Russia. But any such efforts by his administration have been hamstrung by findings by U.S. intelligence agencies that Russia interfered to help the Republican against Democratic presidential candidate Hillary Clinton. U.S. congressional committees and a special counsel are investigating. Moscow denies any meddling and Trump denies any collusion by his campaign.

In a second, more informal statement on the legislation, issued by the White House, Trump said, “Despite its problems, I am signing this bill for the sake of national unity.

“It represents the will of the American people to see Russia take steps to improve relations with the United States,” he added. But he said the law was “seriously flawed – particularly because it encroaches on the executive branch’s authority to negotiate.”

Trump said he was elected partly because of his successes in business, adding, “As President, I can make far better deals with foreign countries than Congress.”

The administration has been sending mixed signals about Russia. Vice President Mike Pence, on a tour of Baltic countries, has been hammering a hawkish line on Russia. On Tuesday, there was a striking contrast between his stance and comments by Secretary of State Rex Tillerson.

“The action by the Congress to put these sanctions in place and the way they did, neither the president nor I were very happy about that,” Tillerson said on Tuesday.

The legislation will affect a range of Russian industries and might further hurt the Russian economy, already weakened by 2014 sanctions imposed after Russia annexed Crime from Ukraine.

It also cracks down on Iran and North Korea for activities that include their missile development programs and human rights abuses, including seeking to punish foreign banks that do business with North Korea.

“Some U.S. officials were saying that this is a bill that might encourage Russia to cooperate with the United States; to me that’s a strange sort of encouragement,” he told reporters. “Those who invented this bill, if they were thinking they might change our policy, they were wrong.”

Presidents often issue signing statements when they sign bills into law. In some cases, they use them to raise concerns about whether legislation passed by Congress has legal problems and to indicate that they will implement it in a narrow fashion.

Republican former President George W. Bush was known for his aggressive use of signing statements, including in 2006 when he signed a bill that prohibited the torture of detainees held at the U.S. Navy base in Guantanamo Bay, Cuba. Bush said he would implement the law in line with his constitutional authority as commander-in-chief.

In Trump’s signing statement, he indicated that provisions of the law conflict with a 2015 Supreme Court decision striking down a law that would let American citizens born in Jerusalem have Israel listed in passports as their country of birth.

The Supreme Court said this law infringed upon the president’s exclusive power to recognize foreign governments. In citing this case, Trump was complaining about what he sees as infringement of his presidential powers on foreign policy matters.

Trump also said he was concerned about the sanctions’ effect on work with European allies, and on American business.

One Republican senator, Lindsey Graham, while welcoming the signing, was critical of the low-key way it was done, without the typical array of television cameras and reporters present.

“The fact (that) he does this kind of quietly I think reinforces the narrative that the Trump administration is not really serious about pushing back on Russia,” Graham said in a CNN interview.

Several provisions of the sanctions target the Russian energy sector, with new limits on U.S. investment in Russian companies. American companies also would be barred from participating in energy exploration projects where Russian firms have a stake of 33 percent or higher.

The legislation includes sanctions on foreign companies investing in or helping Russian energy exploration, although the president could waive those sanctions.

It would give the Trump administration the option of imposing sanctions on companies helping develop Russian export pipelines, such as the Nord Stream 2 pipeline carrying natural gas to Europe, in which German companies are involved.