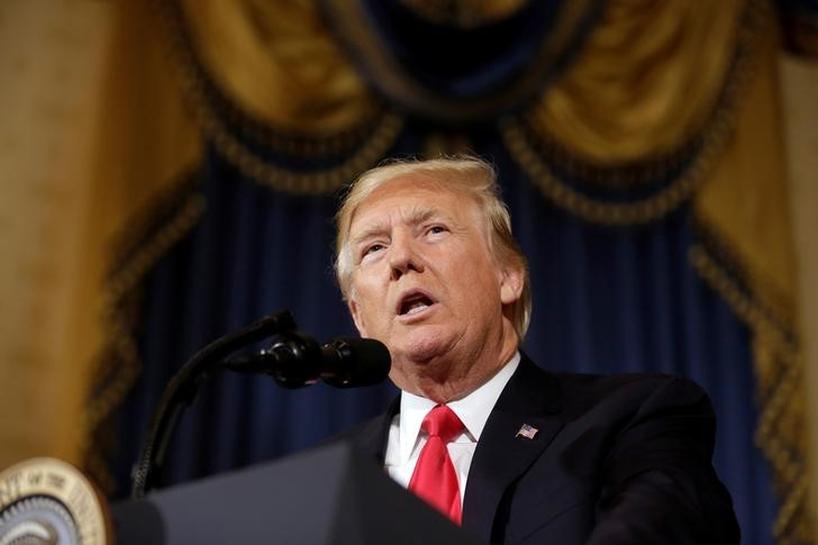 WASHINGTON (Reuters) – U.S. President Donald Trump and members of his administration on Sunday goaded Republican senators to stick with trying to pass a healthcare bill, after the lawmakers failed spectacularly last week to muster the votes to end Obamacare.

For the second day running, the Republican president tweeted his impatience with Congress’ inability to deliver on his party’s seven-year promise to replace the Affordable Care Act, President Barack Obama’s signature healthcare bill commonly known as Obamacare. Members of his administration took to the airwaves to try to compel lawmakers to take action.

But it was unclear whether the White House admonishments would have any impact on Capitol Hill, where Republicans who control both houses signaled last week that it was time to move on to other issues.

Republicans’ zeal to repeal and replace Obamacare was met with both intra-party divisions between moderates and conservatives and also the increasing approval of a law that raised the number of insured Americans by 20 million.

Polling indicates a majority of Americans are ready to move on from healthcare at this point. According to a Reuters/Ipsos poll released on Saturday, 64 percent of 1,136 people surveyed on Friday and Saturday said they wanted to keep Obamacare, either “entirely as is” or after fixing “problem areas.” That is up from 54 percent in January.

With the U.S. legislative branch spinning its wheels, the executive branch pledged to look at rewriting Obamacare regulations. Health and Human Services Secretary Tom Price told ABC’s “This Week” that he would change those regulations that drive up costs or “hurt” patients.

Price sidestepped questions about whether there were administration plans to waive Obamacare’s mandate that individuals have health insurance, saying “all things are on the table to try to help patients.”

But Price also told NBC he would implement Obamacare because it is the “law of the land.”

That Obamacare was still law clearly angered Trump, who has no major legislative accomplishments to show for his first half-year in office. “Don’t give up Republican Senators, the World is watching: Repeal & Replace …” the president said in a tweet on Sunday morning.

Not ‘Time to Move on’

On Friday, Senate Republicans failed to collect enough votes to repeal even a few parts of Obamacare. That capped a week of failed Senate votes on whether to simply repeal, or repeal and replace, the 2010 law, while Trump repeatedly berated lawmakers in a late attempt to influence the legislation.

“The president will not accept those who said, quote, ‘it’s time to move on,'” Kellyanne Conway, a senior counselor to Trump, said on Fox News Sunday. Senate Majority Leader Mitch McConnell, a Republican, had made exactly that comment before dawn on Friday morning after the failed healthcare vote.

The White House budget director, Mick Mulvaney, said on Sunday lawmakers should stay in session to get something done on healthcare – even if this means postponing votes on other issues such as raising the debt ceiling.

The House of Representatives has already gone home for its August break and the Senate is expected to do the same by mid-August.

Mulvaney also said Trump was seriously considering carrying out threats he tweeted about on Saturday, when the president said that “if a new HealthCare Bill is not approved quickly, BAILOUTS for Insurance Companies and BAILOUTS for Members of Congress will end very soon!”

That tweet appeared to be referring to the approximately $8 billion in cost-sharing reduction subsidies the federal government pays to insurers to lower the price of health coverage for low-income Americans.

The Saturday tweet also appeared to be a threat to end the employer contribution for members of Congress and their staffs, who were moved from the normal federal employee healthcare benefits program onto the Obamacare insurance exchanges as part of the 2010 healthcare law.

“What he’s saying is, look, if Obamacare is hurting the American people – and it is – then why shouldn’t it hurt insurance companies and more importantly, perhaps for this discussion, members of Congress?” Mulvaney said on Sunday on CNN.

Some Republicans have said they are trying to find a way forward on healthcare. Senate Republican Susan Collins, one of three Republicans who voted against repealing parts of Obamacare on Friday, told NBC that Congress should produce a series of bills with bipartisan input on healthcare, including appropriating the cost-sharing subsidies.

The Senate has one vote scheduled when it reconvenes on Monday afternoon: whether to confirm a U.S. circuit court judge. Senate aides said they had no guidance for the agenda beyond that vote.