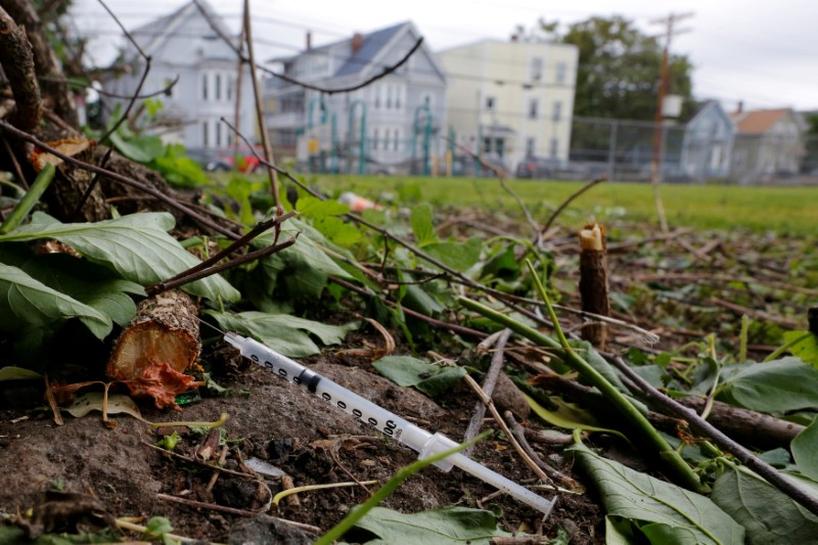 FILE PHOTO: A used needle sits on the ground in a park in Lawrence, Massachusetts, U.S., May 30, 2017, where individuals were arrested earlier in the day during raids to break up heroin and fentanyl drug rings in the region, according to law enforcement officials. REUTERS/Brian Snyder/File Photo

Officials said the move would help fight abuse of prescription painkillers, heroin and fentanyl by expanding access to treatment and beefing up staff at the Department of Health and Human Services to help states address the epidemic, among other changes.

The move comes in response to an epidemic that has worsened in recent years and especially wreaked havoc in rural areas, but stops short of a national emergency declaration that would have freed up additional funds.

“The declaration … will really reorient all of the federal government and the executive branch’s resources towards focusing on providing relief for this urgent need,” one official told reporters on a conference call ahead of a speech by Trump on the issue at 2:00 p.m. ET (1800 GMT).

The United States is battling a surge in opioid-related deaths, including 33,000 in 2015, more than any year on record, according to federal data.

Opioids, primarily prescription painkillers, heroin and fentanyl – a drug 50 to 100 times more powerful than morphine – are fueling the drug overdoses. About 100 Americans die each day from related overdoses, according to the Centers for Disease Control.

The reach of the crisis has pressured Trump to come forward with a forceful response.

On Wednesday, the president told Fox Business Network he would be declaring the crisis a national emergency, which would have given states access to federal funds to fight the crisis.

But officials told reporters on the conference call Thursday that those funds under the Federal Emergency Management Agency have been nearly exhausted after recent storms struck Puerto Rico, Texas and Florida.