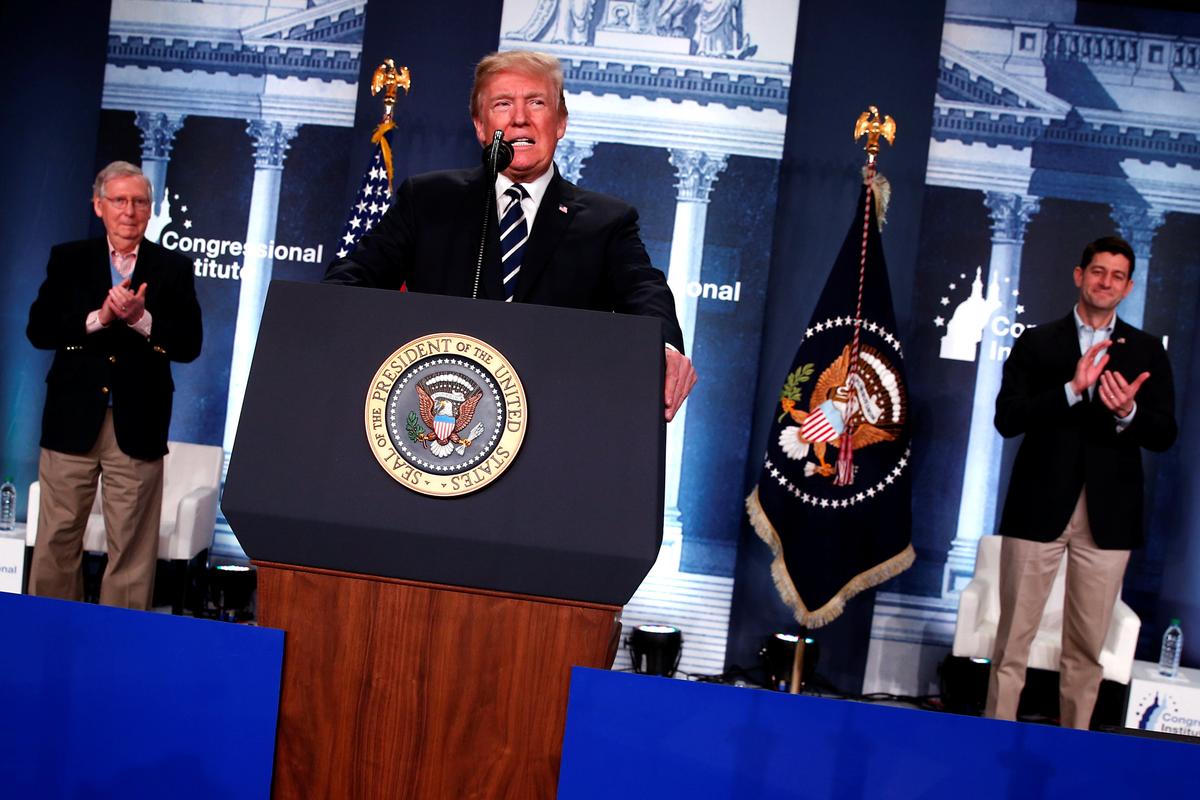 The debate over immigration policy has become closely enmeshed with looming deadlines over government spending. Congress needs to agree by Feb. 8 on another temporary spending bill to keep the government running, and also needs to lift the ceiling on federal debt this month to avoid a government default.

A fight over funding last month led to a three-day government shutdown, resolved in part by a promise by Senate Republican Leader Mitch McConnell to hold a vote on a plan to extend protections for Dreamers – young immigrants brought to the country illegally when they were children.

“To get it done, we’ll all have to make some compromises along the way, to get it done this way,” Trump told lawmakers from his party at a countryside retreat. Republicans control both chambers of Congress, but need support from some Democrats to pass major bills in the Senate.

“We have to be willing to give a little in order for our country to gain a whole lot,” Trump said.

Trump, whose election success hinged partly on his tough line on immigration, has said he is open to letting 1.8 million Dreamers stay in the country and eventually become citizens.

But he made that offer contingent on new curbs for other types of legal immigrants, and on a $25 billion fund to pay for his long-promised wall along the border with Mexico.

Trump was clear on Thursday that his framework was all or nothing, urging the Senate to include all his terms in their bill. But while some of his terms are unpalatable to Democrats, his proposal is also too liberal for some Republicans.

“He’s dropped away a lot of issues and taken heat from a lot of conservatives,” said Senator James Lankford of Oklahoma.

The right wing of the party is uneasy about extending what they call “amnesty” to anyone living in the United States without authorization.

But some hardline members of the Senate and House of Representatives have said they would go along with this if it is linked to the other measures proposed by Trump, particularly an end to the visa lottery system for certain countries, and new limits on the type of family members immigrants can sponsor to move to the United States.

Many Senate Republicans who have been in talks with Democrats on the issue believe that the focus should be a narrower bill: one that addresses the Deferred Action for Childhood Arrivals (DACA) program and Trump’s border wall.

“I think that if we can solve DACA and border security that may be the best I can hope for,” Senator John Thune, a member of the Republican leadership, told reporters.

“Listen, we are not going to do a few billion dollars for border security and have the same problem a decade from now, two decades from now,” Meadows told reporters. “If we’re going to solve the problem, let’s solve the problem.”

The issue of the Dreamers arose after Trump last year canceled DACA, which former Democratic President Barack Obama had created to protect Dreamers, and gave Congress until March 5 to draft a solution.

That deadline is seen as somewhat artificial because of a federal court ruling last month blocking the rescinding of DACA. The program will remain in effect until the Supreme Court resolves the case, which is unlikely to happen by March 5.

Trump has said he is open to extending the deadline and some Republicans have said they would welcome the idea.

The three-day retreat for congressional Republicans, held at a West Virginia resort, is aimed at rallying around legislative priorities before the November elections that will be seen as a referendum on the party’s ability to govern and on Trump’s presidency.

About 700,000 young immigrants signed up for Obama’s DACA protections. Trump said his offer to expand the program to 1.8 million people was “very generous” and he predicted that Democrats would face backlash in the November elections if they choose to reject it.

“If they don’t approve something within that sphere, that means very simply that they’re not looking to approve it at all. They want to use it for an election issue, but it’s now an election issue that will go to our benefit,” Trump said.

All 435 seats in the House and 34 seats in the 100-seat Senate are at stake in November’s election. More than 40 Republicans, including nine committee chairmen, have announced they are leaving Congress or will not seek re-election.