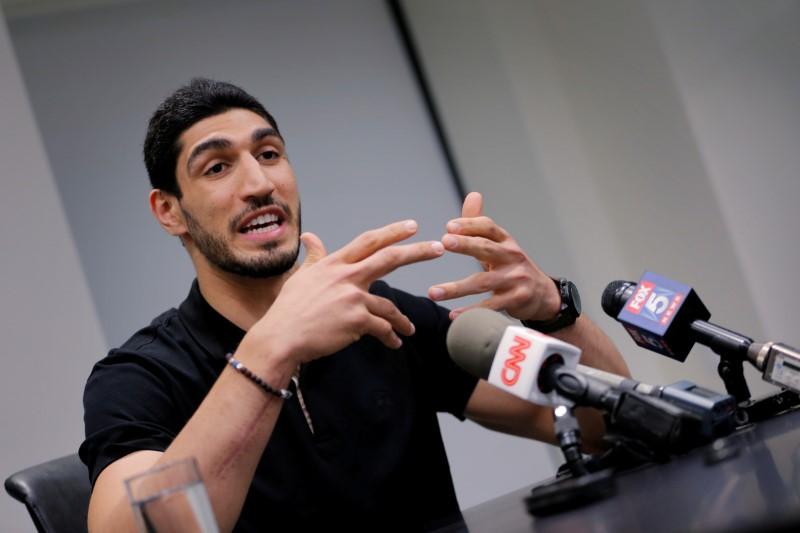 Kanter’s passport was revoked by Turkish authorities earlier this year, and an arrest warrant was issued after he was named a “fugitive” by a Turkish court over his support for U.S-based Islamic preacher Fethullah Gulen, whom Ankara accuses of orchestrating an attempted coup in July 2016.

Kanter is a long-time supporter of Gulen, who has lived in self-imposed exile in Pennsylvania since 1999 and whose extradition Erdogan is seeking. Gulen denies involvement in the failed putsch.

The 6-foot-11-inch center tweeted on Wednesday in response to the indictment, adding screenshots of the media reports.

FILE PHOTO – Turkish NBA player Enes Kanter speaks about the revocation of his Turkish passport and return to the United States at National Basketball Players Association headquarters in New York, U.S. on May 22, 2017. REUTERS/Lucas Jackson/File Photo

“I have said less than that honorless (man) deserves. Add another 4 years for me, master,” he told his 526,000 Twitter followers.

Kanter was detained in Romania in May when authorities learned his Turkish passport had been revoked. He later returned to the United States.

Kanter lashed out at Erdogan at a news conference following his detention, calling him the “Hitler of our century.”

He holds a U.S. green card that allows him to live and work in the country on a permanent basis.

Last year, Turkish media published a handwritten letter signed by Kanter’s father, Mehmet, disowning a son he accused of having been “hypnotized” by the Gulen movement.

In response, the 25-year-old Kanter – the third pick in the NBA draft when he joined Utah Jazz in 2011 – said he was dedicating himself to Gulen and the cleric’s Hizmet (Service) movement.