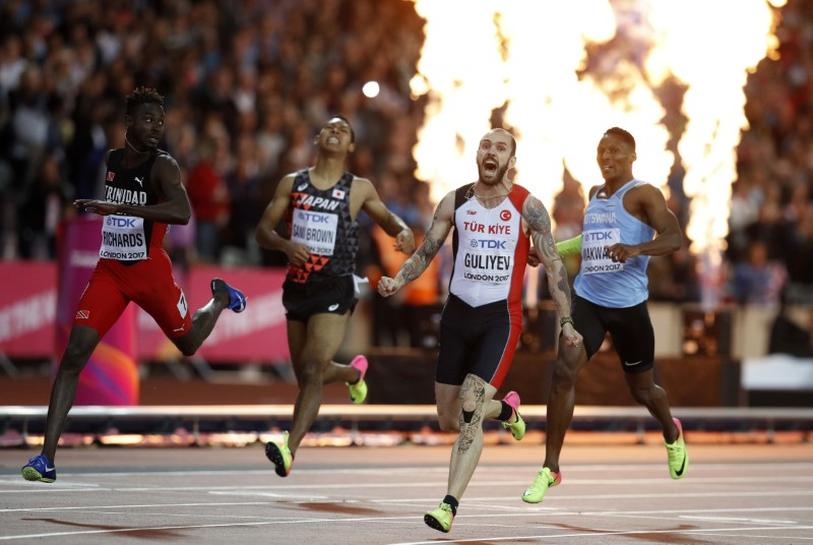 The 27-year-old Guliyev, who had never won a medal in a senior global event, finished just the stronger to triumph in 20.09 seconds before setting off on a lap of honor carrying the flags of both of his nations.

South African Van Niekerk, who took the 400m title on Tuesday, had been seeking to match American Michael Johnson’s achievement of doing the 200/400m double at the Gothenburg worlds in 1995, but had to settle for silver in 20.11 seconds.

Jereem Richards of Trinidad and Tobago was given the same time but was relegated to third by one thousandth of a second.

Isaac Makwala of Botswana, the crowd favorite after his illness travails initially saw him barred from competing this week, started strongly but faded to sixth.

In the absence of Usain Bolt, who had won the event in the last four championships, it always looked a wide open race, but even with the most level playing field for a decade, few were looking at lane five for the likely winner.

Those with a keen athletics eye might point to the fact that Guliyev’s junior best is second only to Bolt’s but, after a decade of minor medals in minor championships, and at the age of 27, his chances of global gold looked slim to say the least.

Guliyev, who became a Turkish citizen in 2011 and was cleared to represent his new country in 2013, did fire out a warning in the semi-finals when he won his heat ahead of Webb and Van Niekerk and, though he slipped into the final pretty much under the radar, he had been confident all along.

“I have shown my best throughout this competition. I delivered my best race at the right time. I’m so happy to be world champion. This is the best moment of my career.

“I was competing against some of the best athletes in the world, so it didn’t bother me that the attention was on them. Maybe at the next competition everyone will look at me instead.”

A choked-up Van Niekerk could barely speak and was upset by what he said was a lack of respect for his 400m victory.

“It was a tough week, there were a lot of people who felt I didn’t deserve it,” he said.

“I work just as hard as every other competitor and show everyone respect but I don’t believe I got the respect I deserved after the 400.”

Makwala said: “I’ve had one of the craziest championship journeys ever. I pray I won’t have to face this again.