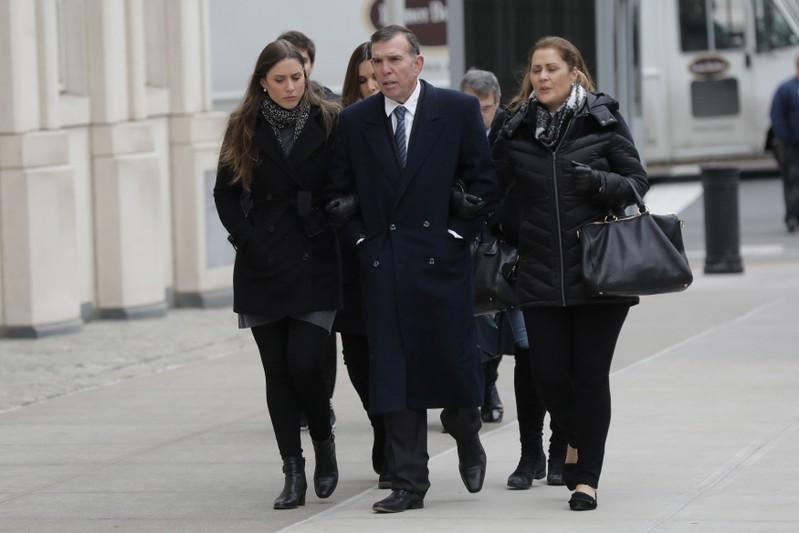 The jury did not reach a verdict in the case against Manuel Burga, former president of the Peruvian soccer federation, and the judge said they should return on Tuesday to deliberate.

The three men were the first to stand trial on charges brought by U.S. prosecutors in 2015 as part of investigations that shook up FIFA.

Prosecutors have charged 42 people and entities in the case, at least 24 of whom have pleaded guilty. Several of those testified for prosecutors in the trial, telling of corruption that went far beyond the three defendants in the courtroom.

Alejandro Burzaco, the former head of Argentine sports marketing company Torneos y Competencias, told jurors that he paid bribes to all three defendants to secure rights to matches including the Copa America and Copa Libertadores. Burzaco had pleaded guilty and agreed to cooperate with prosecutors.

The logo of FIFA is seen in front of its headquarters in Zurich, Switzerland September 26, 2017. REUTERS/Arnd Wiegmann

“It is all hearsay and there is no evidence,” al-Thawadi said at a public event in November after Burzaco’s testimony, according to a representative of the committee. “We are confident in the integrity of our bid.”

Santiago Pena, a former financial manager at Argentine sports marketing firm Full Play, walked the jury through a spreadsheet detailing what he said payments to eight CONMEBOL officials, including Napout and Burga.

The trial was marred by tragedy in its first week, when Argentine police said that Jorge Delhon, a former lawyer for the country’s Futbol Para Todos (Soccer for All), program had committed suicide after Burzaco named him in his testimony.

The next day, U.S. District Judge Pamela Chen put Burga under house arrest after prosecutors said he threatened Burzaco by making a slicing motion across his throat. She cast doubt on the cause of Delhon’s death, saying, “You can call it a suicide. The truth is none of us know that for sure.”