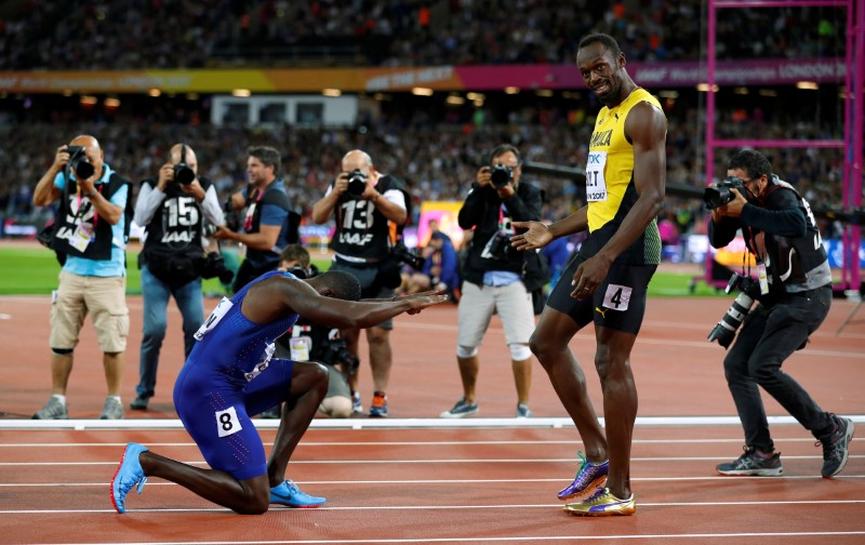 LONDON (Reuters) – He had demanded that the world write one last headline about him — “Unbeatable. Unstoppable.” — and at the World Athletics Championships on Saturday, Usain St Leo Bolt can still have his final sporting wish granted.

Those quicksilver feet which always dealt in gold have another chance to obey his command as he seeks to bring down the curtain on his matchless sprint career and land a 20th global championship title in the 4 x 100 metres relay.

There may never have been an anti-climax in sport quite as deflating as Saturday’s 100 metres final when Bolt, in his last solo race, proved both beatable and stoppable, defeated by the two-time doping offender Justin Gatlin.

It seemed the greatest entertainer that athletics — and maybe even the whole panoply of sport — has known had run out of magic, betrayed by a creaking start from the blocks.

Even as he posed for all the selfies afterwards, demonstrating a grace and sportsmanship that proved him just as big a winner in rare defeat, it still felt wrong, a desperately downbeat way to depart for a sportsman who has brought so much joy to all.

So, to the good news. Delightfully, there are now two last spins for the road. There was supposed to be only one, the 4 x 100 metres relay final on Saturday night, but Bolt has offered us an extra treat by opting to run the heats too earlier that morning.

Saturday night will, he promises us, be the last time we ever see him flowing down a track, with that unique ground-devouring stride that used to make other fine sprinters appear like shrimps wallowing in treacle.

No worries about having to haul himself stiffly out of the blocks here; he’ll take the baton on the anchor leg and fly. He always did look his most imperious with a rolling start and he still holds the fastest 100m relay leg time, an unreal 8.65 seconds.

But then all the records are his. He departs with landmarks that feel for the moment untouchable, especially that 100 metres milestone of 9.58 seconds — nobody has come within a tenth of a second of that one — and the 200m mark of 19.19.

The statistics tell of a longevity of domination that the fickle world of sprinting had never seen before. Yet no athlete could be defined less by cold, emotionless figures.

With Bolt, the pleasure, the gasps of incredulous laughter, always came with just watching him make the impossible look workaday.

Aug 5, 2017; London, United Kingdom; Usain Bolt (JAM) reacts after placing third in the 100m in 9.95 in his last individual race of his career during the IAAF World Championships in Athletics at London Stadium at Queen Elizabeth Park. Mandatory Credit: Kirby Lee-USA TODAY Sports

When he leaves us, perhaps with one fitting final gold and one last daft ‘Lightning Bolt’ pose, it will feel like a light illuminating world sport has just been switched off.

Then where will athletics be? It is hard to imagine a sport that needed a figurehead more than it needed Bolt. Mired in doping scandals, strangled by disinterest and treated with increasing public cynicism, Bolt was its joyous bolthole.

His farewell championships have given a glimpse of athletics life without him.

We had a 100m winner Gatlin booed to the rafters and a 200m victor Ramil Guliyev, whose winning time was nearly a second slower than Bolt’s best and who ended up being interrogated in the victory press conference about his adopted country Turkey’s doping record.

Then, Bolt’s supposed successor as the sport’s main attraction, Wayde van Niekerk, wept over suggestions of IAAF ‘sabotage’ from a rival Isaac Makwala who was not allowed to run the 400 metres because of a virus he claimed he didn’t have.

It was never like that when Bolt was doing his thing. Bolt brought a pure, clear simplicity to the sport, rich in entertainment, delivered with a smile — and on a diet of chicken nuggets.

The world did not just love Bolt, smiling with him as he made winning look preposterously easy; athletics trusted Bolt in an era when the sport was engulfed by disenchantment.

When Sebastian Coe, the IAAF President, watched his farewell to Jamaican athletics in Kingston this year, he told Reuters: “He’s connected with young people, with people that didn’t even think they liked track and field, he’s turned them into lifelong fans.

“I’m not just saying that as the president of the world sport, I’m saying this as a fan.”

Because Bolt made us all his fans. He was athletics’ Muhammad Ali and Pele rolled into one.

If anyone else had declared, as he did after his 200m triumph at London 2012, “I am a living legend. Bask in my glory!”, he would have appeared an appalling braggart. Not Bolt; he just made it seem like a bit of fun.

And that was, ultimately, his crowning glory. Not just that he was the fastest man in the world but that he so obviously loved every hundredth of a second of us enjoying him. Let’s bask in his glory one last time.