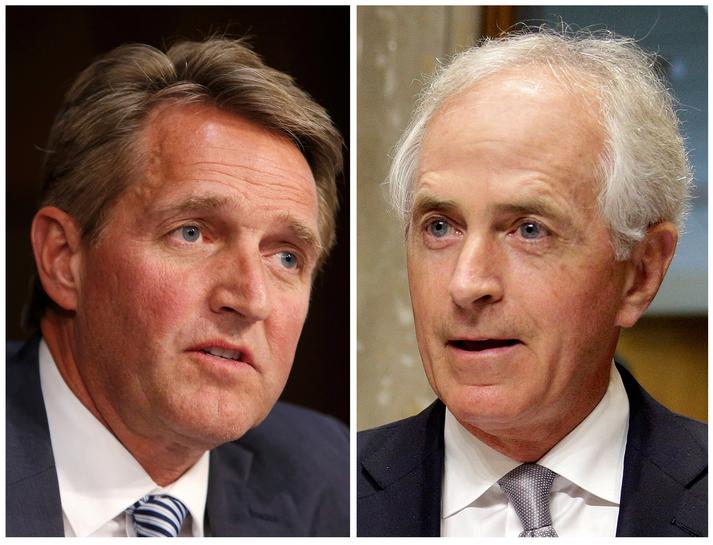 WASHINGTON (Reuters) – Tensions among Republicans about President Donald Trump boiled over on Tuesday as two senators accused Trump of debasing U.S. politics and the country’s standing abroad, a rebellion that could portend trouble for his legislative agenda.

The extraordinary public criticism of the president from Jeff Flake and Bob Corker further strained what had already been a fraught relationship between Trump and fellow Republicans as they try to enact tax reform and other policy items.

In an emotional speech on the Senate floor, Flake repeatedly targeted Trump’s style of governing, saying American politics had become “inured” to ”reckless, outrageous and undignified” behavior from the White House.

“The instinct to scapegoat and belittle threatens to turn us into a fearful, backward-looking people,” said the Arizona lawmaker, who announced he would not run for re-election next year.

“I will not be complicit or silent,” Flake said.

Trump, via Twitter, has been unrelenting in his criticism of Corker and Flake, accusing them of supporting Democratic priorities, and using sometimes slashing language, such as his dismissal of Corker as “liddle Bob Corker.”

By announcing he will be leaving when his term ends in early 2019, Flake effectively freed himself up to speak his mind, without having one eye on voter reactions in his home state.

A Morning Consult survey conducted Sept. 24 to Oct. 24 said Flake had an approval rating in Arizona of 30 percent.

Corker, who has also said he is not running for re-election in Tennessee, accused Trump of telling falsehoods that could be easily proven wrong and willfully damaging the country’s standing in the world, eviscerating the president with comments that stirred deepening divisions in the Republican Party.

White House spokeswoman Sarah Sanders dismissed the comments from Flake and Corker and said Trump wanted senators who could make progress on his policy goals.

“He wants people to be in the Senate that are committed to actually moving the ball down the field, and I don’t think these two individuals necessarily have been as focused on that,” she told reporters.

FILE PHOTO: A combination photo of Republican Senators Jeff Flake (L) of Arizona and Bob Corker of Tennessee are shown in Washington, U.S., on March 31, 2017 and October 24, 2017. REUTERS/Joshua Roberts/File Photos

Republican congressional leaders who have learned to tread carefully amid controversies surrounding Trump, largely stayed on the sidelines of the latest fight.

“We’re going to concentrate on what our agenda is and not any of these other distractions that you all may be interested in,” Senate Majority Leader Mitch McConnell told reporters.

“Senator Flake wisely decided to give up on his own terms rather than fight a losing battle for re-election and have the voters retire him at the ballot box next year,” said the group’s top strategist, Ed Rollins.

The president is seeking to build consensus around proposed tax cuts. Republicans control both chambers of Congress, but hold just a 52-48 majority in the Senate.

Securing passage of his tax-cut plan is critically important to Trump, who has yet to get major legislation through Congress since taking office in January.

Trump visited the Capitol on Tuesday for a policy lunch that was described by participants as productive.

Over the summer, Trump pilloried Senate Republicans – as a group and some by name – after they failed to generate sufficient votes to repeal and replace the 2010 Affordable Care Act, popularly known as Obamacare, one of his top presidential campaign promises.

The dollar lost ground on news that Flake would not seek re-election because it added to investor worries about the fate of the tax plan, which has widely been seen as a potential boost to American companies.

It recovered after a Bloomberg report that Trump asked senators at a closed-door lunch whom they would support to become the next Federal Reserve chairman. Bloomberg quoted one senator as saying that John Taylor, viewed in the markets as an inflation hawk, got the most votes.

Trump has also provoked the ire of another respected senior Republican, Senator John McCain, whose war record he mocked during last year’s campaign.

Last week, former Republican President George W. Bush, who has kept a low profile since leaving office in January 2009, took a thinly veiled swipe at Trump in a speech in which he decried “bullying and prejudice” and denounced anti-immigrant sentiment.