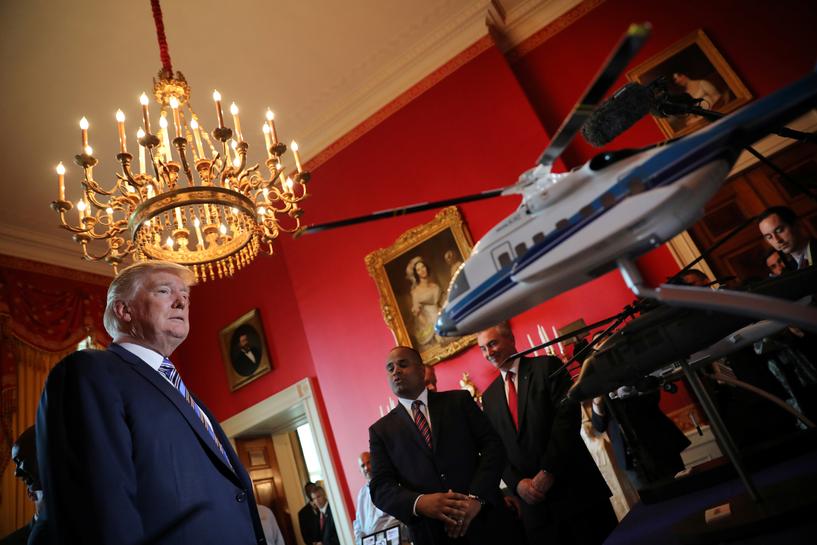 WASHINGTON (Reuters) – The U.S. government cleared the way on Monday for thousands more foreign workers to enter the country under temporary seasonal visas, just as President Donald Trump declared this “Made In America” week and pledged to stand up for U.S. workers.

Trump, a former New York real estate magnate who has relied on seasonal workers at his hotels and resorts, campaigned on promises to restore American jobs. On Monday, he showcased “Made in America” products at the White House and made an impassioned defense of America First policies.

“We’re going to stand up for our companies and maybe most importantly for our workers,” the Republican president said. “Clearly it’s time for a new policy, one defined by two simple rules: We will buy American. And we will hire American.”

As a result, the government will allow 15,000 additional visas for temporary seasonal workers, meant to help American businesses in danger of suffering irreparable harm because of a shortage of such labor, the Department of Homeland Security said in a statement.

“As a demonstration of the administration’s commitment to supporting American businesses, DHS is providing this one-time increase to the congressionally set annual cap,” Secretary of Homeland Security John Kelly said in a statement.

Many seasonal businesses such as resorts, landscaping companies and seafood harvesters and processors had sought permission to temporarily hire more immigrants.

Congress originally set the cap at 66,000 workers for the fiscal year ending Sept. 30. In May, lawmakers gave Kelly authority to approve up to an additional 70,000 temporary visas and pleaded with him to use his authority to issue as many of them as he thought appropriate.

Roy Beck, president of NumbersUSA, a group that supports immigration controls, said in a statement the decision “threatens to reverse the trend of reports emerging around the country of employers working harder and raising pay to successfully recruit more unemployed Americans for lower-skilled jobs.”

Beck said it was “yet another example of the administration and Congress failing to keep the Trump campaign promise of putting American workers first.”

Trump campaigned on an “America First” platform of favoring Americans for hiring. Trump’s golf resorts in Florida have used the visas, however, to hire temporary guest workers (reut.rs/1R4pKma).

A group of U.S. companies that use the visas, called the “the H-2B Workforce Coalition,” praised the “minimal relief granted.”

It said: “From landscapers in Colorado to innkeepers in Maine to seafood processors along the Gulf Coast to carnivals nationwide, we hope the visa expansion will help some businesses avoid substantial financial loss, and in some cases, prevent early business closures during their peak season.”

A report on Monday by the Economic Policy Institute, a liberal think tank, found, however, there was little evidence of worker shortages in H-2B jobs at the national level.

“Expanding the H-2B program without reforming it to improve protections and increase wages for migrant workers will essentially allow unscrupulous employers to carve out an even larger rights-free zone in the low-wage labor market,” said Daniel Costa, director of immigration law and policy research at the institute.

Kelly has acknowledged that many temporary workers “are victimized when they come up here, in terms of what they’re paid.”

DHS said the government had created a tip line to report any abuse of the visas or employer violations.