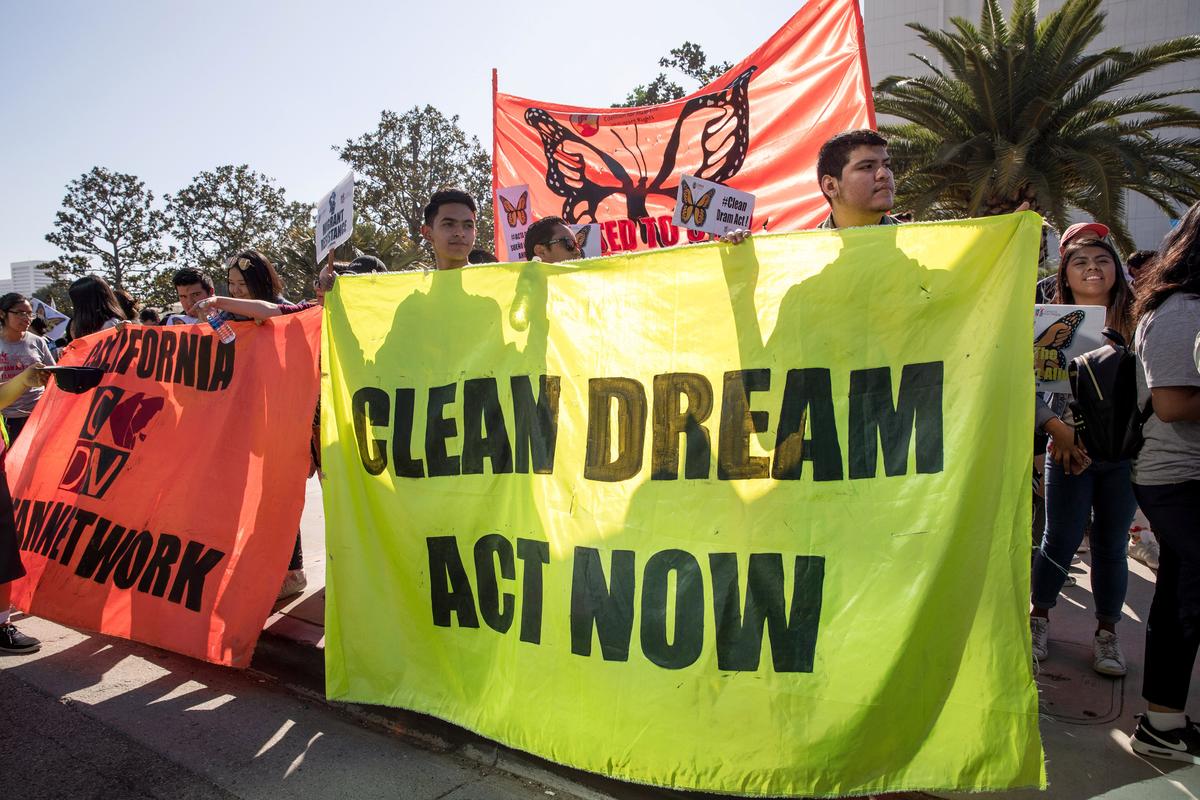 WASHINGTON (Reuters) – Legislation to help young “Dreamer” immigrants struggled to gain footing in the U.S. Congress on Monday, as lawmakers prepared to hold a Tuesday vote on a short-term government funding measure to avoid a rerun of January’s three-day partial shutdown.

Republicans in the House of Representatives were told at a Monday night meeting that the stop-gap measure would extend funding through March 23, along with a year of defense funding and two years of funding for community health centers, lawmakers said.

Congress’ failure to reach an immigration deal delayed passage of a temporary spending bill in mid-January, triggering the three-day shutdown. With existing money running out on Thursday, lawmakers were rushing to pass a stop-gap spending bill that would keep agencies open as they continue a months-long effort to give permanent protections to Dreamers, who were brought illegally to the United States when they were children.

Democratic Senate Leader Chuck Schumer said that if the House passes a short-term funding measure with long-term defense funding and sends it to the Senate, where it must pick up some Democratic support to pass, it “would be barreling head-first into a dead-end.”

House Republicans said they knew that if they passed such a bill on Tuesday it could be sent back by the Senate with additional defense funding stripped out.

“If that’s the choice they make then certainly we’ll have to deal with it on Wednesday or Thursday if the bill comes back,” Republican Representative Mark Meadows, head of the conservative House Freedom Caucus, told reporters.

Bipartisan momentum for an immigration bill got a boost earlier on Monday when Republican Senator John McCain and Democratic Senator Chris Coons introduced a compromise measure. Similar legislation has already gained some traction in the House of Representatives.

But Republican President Donald Trump appeared to dismiss it immediately, saying any deal should provide funding for his long-promised Mexican border wall. The legislation did win the backing of a Senate Democrat, Dick Durbin, who has been central to the fight for Dreamers.

A broader bill by Durbin and Republican Senator Lindsey Graham was rejected by the White House last month.

Besides protecting Dreamers from deportation, the McCain-Coons plan would boost security on the Mexican border. But it is narrower in scope than a plan Trump put forward last month, which was resisted by hardline Republicans and Democrats.

It does not offer a sweeping overhaul of the immigration system or include funding for the wall, but calls for a way for Dreamers to avoid deportation and earn citizenship, while also bolstering border security.

The legislation would rely on a variety of tools, not just a physical wall, for securing the southern U.S. border.

About 700,000 Dreamers stand to lose temporary protections that have allowed them to work and study in the United States without fear of deportation under Democratic former President Barack Obama’s Deferred Action for Childhood Arrivals, or DACA, program.

The latest initiative would protect the 700,000, while also allowing hundreds of thousands of additional young immigrants in similar situations to apply for temporary legal status that could lead to U.S. citizenship.

Most came from Mexico and Central American countries.

“The bill … does address the two most pressing problems we face: protecting DACA recipients and securing the border,” Coons said in a statement with McCain.

DACA had been set to expire on March 5 after Trump canceled the program last autumn and asked Congress to come up with a legislative solution by that date. A federal court last month blocked the Trump administration from ending the program, and the administration’s appeal is pending before the Supreme Court.

Lawmakers have been struggling to reach a deal on an immigration bill, despite broad public support for helping Dreamers.

The last major legislative push failed in 2013-14 when House Republicans refused to consider a broad, bipartisan measure passed by the Senate.

During a conference call with reporters, Coons said he was alarmed to hear some senators now talking about simply putting off long-term decisions about Dreamers for a year and making some “modest investments” in additional border security.

Coons, a member of the Senate Judiciary Committee that oversees immigration policy along with other panels, also said that despite Trump’s insistence on building a wall, border law enforcement officials in a recent briefing for senators did not make such a request.

“It was clear they are not embracing the notion of a single concrete wall from the Gulf of Mexico to the Pacific” Ocean, Coons said. Instead, he said administration officials spoke of the need to repair and upgrade existing fencing, build additional barriers and make other improvements.

Trump has said any immigration deal must include billions of dollars to build the border wall. During his campaign, Trump promised Mexico would pay for the wall, something the Mexican government has said it will not do.

“Any deal on DACA that does not include STRONG border security and the desperately needed WALL is a total waste of time. March 5th is rapidly approaching and the Dems seem not to care about DACA. Make a deal!” the president said in a tweet on Monday.