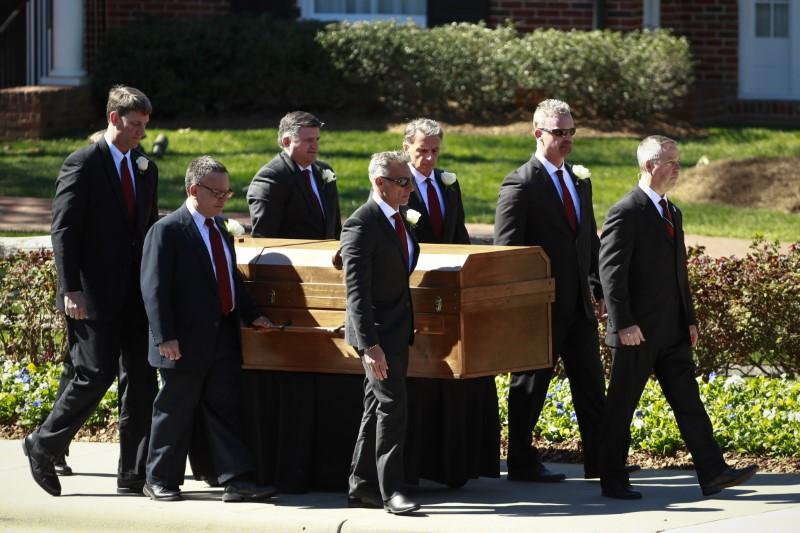 CHARLOTTE, N.C. (Reuters) – U.S. evangelist Billy Graham, who preached to millions and counseled presidents in his 70-year career, was remembered as a man who loved his family and the Bible at a funeral on Friday attended by President Donald Trump in Graham’s native North Carolina.

The service at his religious center was a mix of Bible readings, tender family memories, songs and words meant to inspire. About 2,300 people gathered beneath a canvas tent emblematic of Graham’s 1949 Los Angeles revival that marked his breakthrough as a religious leader.

Graham, who died on Feb. 21 at age 99, lay in honor at the U.S. Capitol this week in recognition of a clergyman who became the first noted evangelist to take his message to the Soviet bloc when its communist regimes were hostile to organized religion.

“Just a few days ago, my father followed Jesus all the way to heaven,” son Franklin Graham, president and CEO of the Billy Graham Evangelistic Association, said at the funeral.

He said the man seen by millions around the world preaching the Bible was the same man at home. Billy Graham asked his children to read him the Bible because he loved to hear God’s word, other family members said.

“He was faithful. He was available and he was teachable,” son Nelson“Ned” Graham told the service.

The president spoke with family members ahead of the funeral, including Jean Ford, Graham’s sister, but was not among the speakers at the service.

Graham will be buried in a pine coffin made by Louisiana prison inmates and laid to rest next to his late wife, Ruth, at the Billy Graham Library in Charlotte.

His headstone will carry his name, dates of birth and death and the inscription“Preacher of the Gospel of the Lord Jesus Christ” above a reference to John 14:6. The Bible passage reads:“Jesus answered,‘I am the way and the truth and the life. No one comes to the Father except through me.’”

The evangelist found himself at times in controversy over his disapproving stand on gay rights, as well as over a secretly recorded conversation with Nixon in which the cleric complained that Jews had too much influence on the U.S. media.