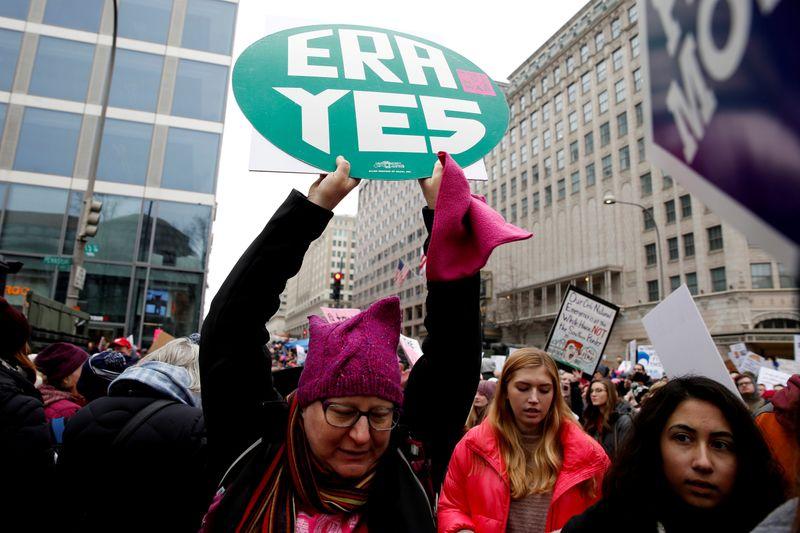 WASHINGTON (Reuters) – The U.S. House of Representatives on Thursday voted to revive a decades-old effort to enshrine equal rights for women in the U.S. Constitution, setting up an election-year confrontation that faces long odds of success.

By a vote of 232 to 183, the Democratic-controlled House voted to remove a long-past deadline for ratification of the Equal Rights Amendment, which was first proposed in 1923. The vote fell largely along party lines.

The Republican-controlled Senate also would need to vote to extend the deadline, and Senate Majority Leader Mitch McConnell, a Republican, said last week that he was “personally not a supporter.”

The amendment states in part: “Equality of rights under the law shall not be abridged by the United States or any state on account of sex.”

The House vote came after legislators in Virginia last month became the 38th state to approve the amendment, clearing the threshold required to change the Constitution.

But that vote came decades after Congress first approved the ERA in 1972. Congress set a seven-year deadline for ratification, and later extended it to 1982. The fight over the amendment was a defining issue in the 1970s, but has languished for decades.

Democrats say the ERA is a needed bulwark against sexual discrimination and would help women achieve equal pay.

“Nowhere in our Constitution does it state clearly that women must be treated equally,” House Majority Leader Steny Hoyer said.

Conservative activists say they fear it could be used to bolster abortion rights.

Opponents, including President Donald Trump’s administration, say advocates are trying to make an end run around the original timetable for ratification.

Despite Virginia’s recent ratification, several states have voted to reverse their earlier ratifications.

“If you count a latecomer on the plus side, how do you disregard states that said we changed our mind?” said Republican Representative Doug Collins.

Republican lawmakers pointed out that even liberal Supreme Court Justice Ruth Bader Ginsburg, a long-time supporter of the amendment, has said she would like to see the United States “start over” with the measure.

Republican Representative Vicky Hartzler argued that the amendment was not needed because women’s rights have been upheld by federal laws and court precedents.

The amendment would not bring women more rights, but would “entrench the legality of abortion,” she said.

Last month, the U.S. Justice Department issued a legal opinion saying the ratification process would have to begin anew.

Reporting by Susan Cornwell in Washington; Editing by Andy Sullivan and Matthew Lewis