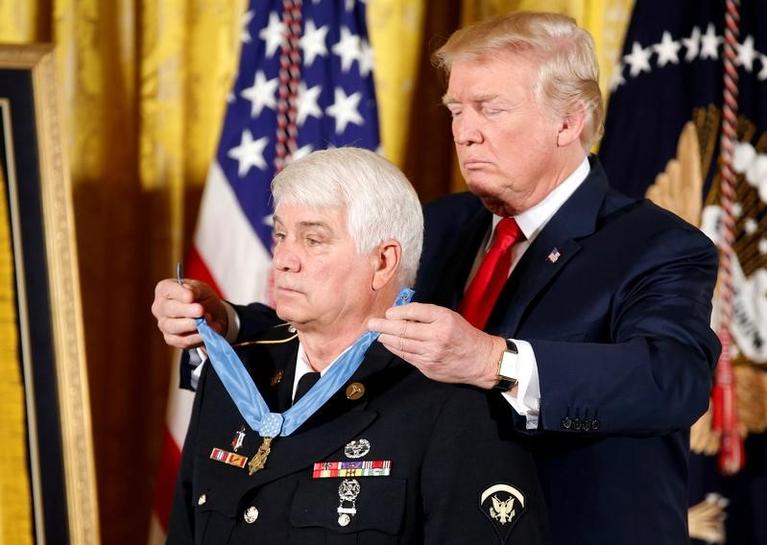 WASHINGTON (Reuters) – A 71-year-old former Army medic from Michigan who saved wounded comrades under fire during the Vietnam War was given the highest U.S. military award by President Donald Trump in a White House ceremony on Monday.

James McCloughan, a retired high school teacher and coach from South Haven, received the Medal of Honor for his valor in saving the lives of 10 members of his platoon at the Battle of Nui Yon Hill in May 1969.

“Jim, I know I speak for every person here when I say that I am in awe of your actions and your bravery,” Trump said before fastening the medal with its star and blue ribbon around the white-haired veteran’s neck.

It was Trump’s first award of the Medal of Honor since taking office in January.

Ten men from McCloughan’s unit attended the medal ceremony, including five he saved, the president said.

U.S. President Donald Trump stands before awarding the Medal of Honor to James McCloughan, who served in the U.S. Army during the Vietnam War, during a ceremony at the White House in Washington, U.S. July 31, 2017.Joshua Roberts

McCloughan was 23 and serving as an Americal Division medic when he returned to the battlefield multiple times over 48 hours of fighting to retrieve the wounded soldiers, despite being hit himself with grenade shrapnel and gunfire, his citation said.

He refused to be evacuated to treat his wounds and held a strobe light in an open area at night for a resupply air drop, it said. He also destroyed a North Vietnamese Army position with a grenade.

The Medal of Honor generally must be awarded within five years of the actions that justify it. A former platoon leader began campaigning in 2009 for McCloughan to get the award, resulting in an act of Congress in December to waive the time limit.

President Barack Obama signed the act, making McCloughan eligible for the medal before he left office.

McCloughan left the service with a rank of specialist five and returned to Michigan. He taught psychology and sociology at South Haven High School and coached football, wrestling and baseball.

He is a member of the Michigan High School Coaches Hall of Fame. South Haven is about 180 miles (290 km) west of Detroit.