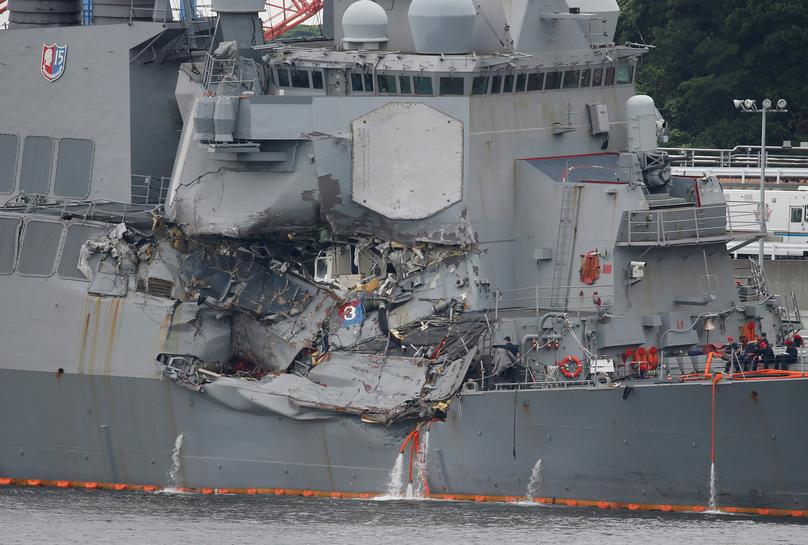 WASHINGTON/TOKYO (Reuters) – The U.S. Navy has removed the two senior officers and the senior enlisted sailor on a U.S. warship that almost sank off the coast of Japan in June after it was struck by a Philippine container ship, the Navy said on Friday.

Multiple investigations have yet to apportion blame for the accident that killed seven U.S. sailors aboard the guided missile destroyer the USS Fitzgerald.

However, the punishments are the first public admission by the U.S. Navy that mistakes by the crew contributed to the deadliest incident on a U.S. warship since Islamist extremists bombed the USS Cole in Yemen’s Aden harbor in 2000.

“The collision was avoidable and both ships demonstrated poor seamanship. Within Fitzgerald, flawed watch stander teamwork and inadequate leadership contributed to the collision,” the U.S. Seventh Fleet said in a media release.

In the first detailed account from one of those directly involved in the collision in the early hours of June 17, the captain of the cargo ship the ACX Crystal said in a report seen by Reuters his crew signaled the Fitzgerald with flashing lights around 10 minutes before the collision. The Fitzgerald did not respond or alter course, it said..

The commercial vessel had the right-of-way under maritime rules and the Fitzgerald, which was hit on the starboard side, was likely at fault.

Several U.S. and Japanese investigations are still under way into how the Fitzgerald and the much larger ACX Crystal collided in clear weather south of Tokyo Bay.

One pertinent question, said two naval officers who spoke on condition of anonymity, is what was happening at the time in the Fitzgerald’s Combat Information Center, where crew members monitor radar that should have detected the approach of a 30,000-ton cargo vessel.

Commander Bryce Benson was relieved “due to a loss of confidence in his ability to lead”, the Seventh Fleet said.

Commander Sean Babbitt and Master Chief Petty Officer Brice Baldwin “contributed to the lack of watch stander preparedness and readiness that was evident in the events leading up to the collision”, it said.

Several other junior officers have also been relieved, with administrative action taken against other members of the ship’s watch teams.

“Serious mistakes were made by members of the crew, and there was no benefit to waiting on taking accountability actions,” Moran said.

An official report released on Thursday contained dramatic accounts of what happened when the freighter hit the Fitzgerald.

The collision, at 1:30 a.m. local time, tore a gash below the Fitzgerald’s waterline and sent water pouring into the warship, the report said.

“Water on deck,” sailors in a berthing area started yelling. “Get out,” they shouted as mattresses, furniture, and even an exercise bicycle began to float.

The berthing was completely flooded within 60 seconds, although more than two dozen of the 35 sailors in it escaped. The last sailor to be rescued was in the bathroom at the time of the collision.

“Lockers were floating past him, … at one point he was pinned between the lockers and the ceiling of Berthing 2, but was able to reach for a pipe in the ceiling to pull himself free,” the report said.

Two sailors stayed at the foot of the ladder in the compartment to help others escape.

“The choices made by these two sailors likely saved the lives of at least two of their shipmates,” the report said.

Benson was trapped in his cabin and five sailors used a sledgehammer to break through the door.

“Even after the door was open, there was a large amount of debris and furniture against the door, preventing anyone from entering or exiting easily,” the report said.

The sailors tied themselves to each other with a belt and rescued Benson, who was hanging from the side of the ship.