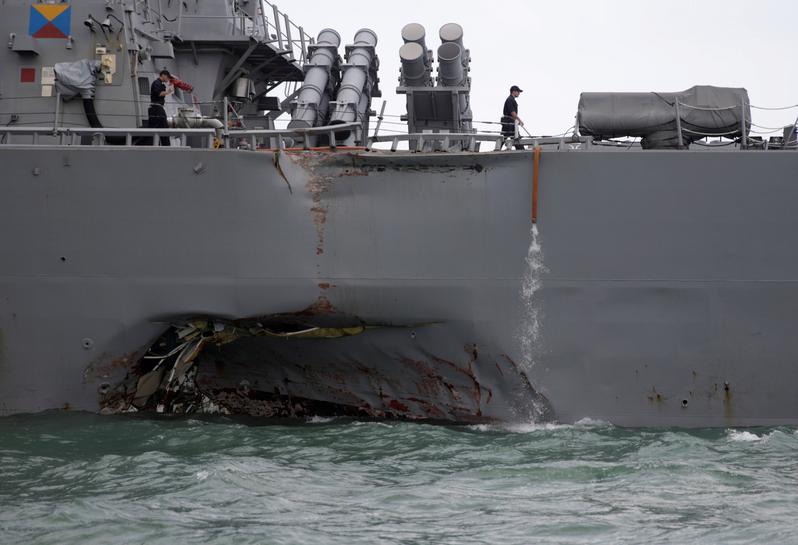 SINGAPORE (Reuters) – Ships, aircraft and divers from an international search-and-rescue operation were still looking for 10 missing U.S. sailors on Tuesday after a collision between a U.S. warship and a merchant vessel in waters near Singapore and Malaysia.

The USS John S. McCain and the tanker Alnic MC collided early on Monday while the guided-missile destroyer was nearing Singapore for a routine port call. The collision tore a hole in the warship’s port side at the waterline, flooding compartments that included a crew sleeping area.

The collision – the fourth major accident in the U.S. Pacific fleet this year – prompted a fleet-wide investigation and plans for temporary halts in operations to focus on safety.

The U.S. Navy said in a statement late on Monday that aircraft from the amphibious assault ship the USS America, which was in port at Singapore’s Changi Naval Base, would continue searching for the missing sailors.

They join aircraft and vessels from Singapore, Malaysia and Indonesia already searching in the area.

Damage control efforts on board the USS John S. McCain were focused on draining water from the ship and restoring auxiliary systems, and divers had started assessing the warship’s damaged hull, the statement said.

A public affairs officer for the U.S. Seventh Fleet told Reuters the USS John McCain remained pierside at Changi Naval Base and that a repair plan would be put in place after assessments were complete.

Admiral Scott Swift, who serves as the Commander of the U.S. Pacific Fleet, was in Kuala Lumpur on Monday and was scheduled to arrive in Singapore on Tuesday.

Singapore’s Maritime and Port Authority said search efforts had continued through the night. Video footage and still pictures showed that a wide hole was ripped in the John S. McCain’s aft port side.

Five sailors were also injured in the accident, although the U.S. Navy said none of those injuries was life-threatening.

On Monday, U.S. Chief of Naval Operations Admiral John Richardson said there were no indications so far the collision was intentional or the result of cyber intrusion or sabotage.

“But review will consider all possibilities,” he said on Twitter.

Richardson said he was asking his fleet commanders worldwide for a one-to-two-day, staggered “operational pause” to discuss action to ensure safe and effective operations. He envisaged this could begin within a week.

He also said a comprehensive review would examine the training of U.S. forces deployed to Japan “to make sure we are doing everything we can to make them ready for operations and warfighting”. The U.S. Seventh Fleet is headquartered in Japan.

This would include looking at “operational tempo, trends in personnel, materiel, maintenance and equipment,” Richardson said.

Reporting by Sam Holmes and Karishma Singh; Additional reporting by Henning Gloystein in SINGAPORE and David Brunnstrom and Idrees Ali in WASHINGTON; Editing by Paul Tait

Japan to extend Tokyo area state of emergency to Mar 21
Girl dies after being caned during ‘exorcism’ in Sri Lanka
Red Cross says volunteers hurt in Myanmar, urges halt to violence
UN tells Myanmar military to ‘stop murdering’ protesters
This man can read and write 30 ancient Indonesian scripts, some as old as 500 years