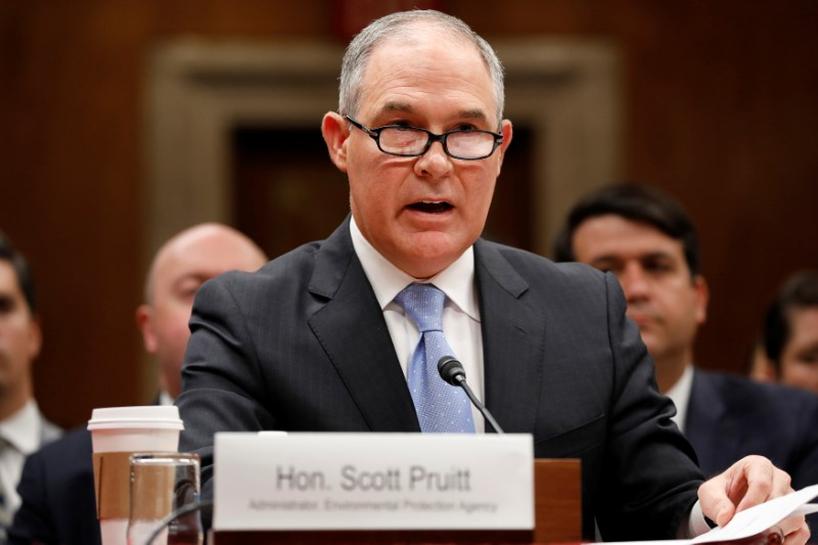 NEW YORK The U.S. government on Wednesday proposed to reduce the volume of biofuel required to be used in gasoline and diesel fuel next year as it signaled the first step toward a potential broader overhaul of its biofuels program.

The U.S. Environmental Protection Agency’s proposed total volume marked a slight decline from current levels and was more than 20 percent below targets laid out in a 2007 law. The U.S. Renewable Fuel Standard, or RFS, requires increased volumes of renewable fuels each year, but the proposal would keep targets for use of conventional biofuels at current levels.

The agency has begun preparations to reset future biofuel targets, said EPA Administrator Scott Pruitt. His proposal was met with praise and calls for broader reform from the petroleum industry and mixed response from biofuels producers.

Environmentalists, who have been critical of ethanol, called for Congress to reform the program.

The RFS has become a battlefield between corn and oil interests. The law has been a boon to agriculture, supporting economies across the Midwest’s Corn Belt.

The EPA’s proposed cuts to advanced and cellulosic biofuels “will have a chilling effect on the push toward next generation biofuels,” said Iowa Senator Chuck Grassley.

Petroleum companies say the biofuel targets are impossible to meet and add billions of dollars in costs. The plan would require companies to blend a total of 19.24 billion gallons of renewable fuels in the country’s fuel supply next year.

The proposal is “consistent with market realities focused on actual production and consumer demand while being cognizant of the challenges that exist in bringing advanced biofuels into the marketplace,” Pruitt said in a statement.

The agency would keep the 2018 target for conventional ethanol at 15 billion gallons, unchanged from 2017, and set the requirement for advanced biofuels, including cellulosic ethanol, at 4.24 billion gallons.

These latest volumes confirmed an earlier Reuters report for volumes well below the 26 billion gallons of renewable fuels outlined by Congress in 2007. The law was aimed at cutting U.S. oil imports and boosting the use of renewable fuels.

The EPA also requested comments related to concerns that the biofuels requirements increasingly are being met by supplies from Brazil, Argentina and Indonesia.

The agency proposed setting the requirements for cellulosic below the current year’s levels at 238 million gallons and kept biomass-based diesel requirements at 2.1 billion gallons for 2019, unchanged from the levels set for 2018 under former President Barack Obama.

Development of cellulosic biofuels has been slower than expected by lawmakers when they set up the program, stymied by regulatory delays and the economic downturn.

The American Petroleum Institute, which represents oil companies, including BP America and Chevron Corp, praised the move to lower the overall requirements but said the proposal did not go far enough.

Ethanol groups praised the agency for maintaining the target for conventional ethanol, which is mostly produced from corn in the United States, but were critical of the move to lower the advanced targets.

“We are concerned that by reducing the cellulosic (requirement), this proposal may weaken the signal to the marketplace,” said Bob Dinneen, head of the Renewable Fuels Association.

“Today’s proposal underscores the need for the U.S. Congress to take the bull by the horns and reform the Renewable Fuel Standard to protect our clean water, our public health, and our wildlife,” said National Wildlife Federation President and CEO Collin O’Mara.

Prices of U.S. renewable fuel credits rose 4 cents to trade at 75 cents apiece. Biodiesel credits were up 3 cents at $1.145 each, traders said.