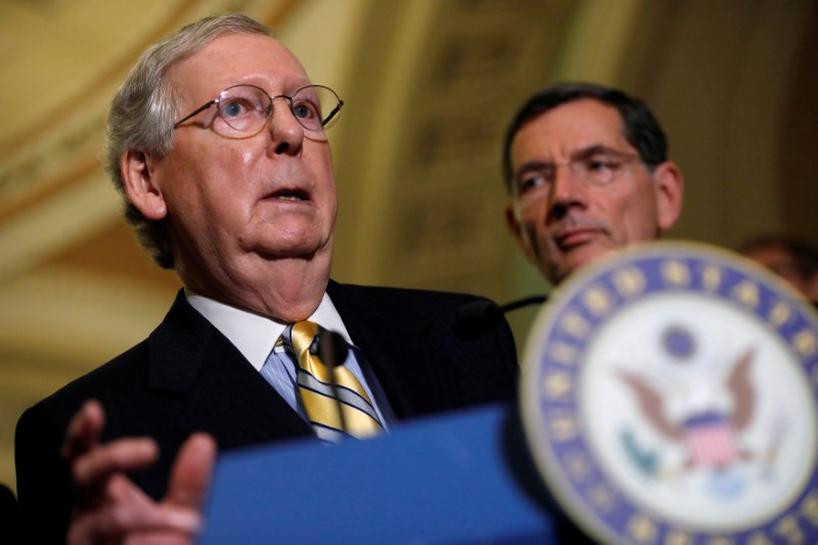 WASHINGTON (Reuters) – U.S. Senate Republicans will vote on a straight repeal of Obamacare after efforts to overhaul the law collapsed, rattling financial markets on Tuesday and clouding the path forward for President Donald Trump’s other domestic policy goals.

After two Republicans said they would not back the latest Obamacare rollback bill, Senate Republican Leader Mitch McConnell threw in the towel and said he would schedule a vote in coming days on a two-year transition to simply repealing the 2010 healthcare law with no replacement.

“We will now try a different way to bring the American people relief from Obamacare,” McConnell said on Tuesday as he opened the Senate where the Republicans hold a razor-thin majority.

Trump made repealing and replacing Obamacare a top campaign promise last year. Republicans have sought for seven years to gut the law. Democrats were united in opposition against the Senate healthcare overhaul, calling it a giveaway to the rich that would hurt millions of the most vulnerable Americans.

The failure of the bill left Trump with no major legislative achievements after almost six months in office and calls into question, not only about his ability to get other key parts of his agenda through Congress, but the Republican Party’s capacity to govern effectively.

As the bill collapsed in the Senate, leaders in the Republican-controlled House of Representatives unveiled a budget plan putting a proposed tax code overhaul on the same partisan procedural path that led to the anti-Obamacare initiative’s chaotic downfall late on Monday.

Trump urged an outright repeal, even as other Republicans sought a shift toward bipartisanship with Democrats. The setback sent the U.S. dollar to a 10-month low against a basket of major currencies as investors worried about the impact on other administration reform efforts.

In an early morning Twitter message, Trump said, “We were let down by all of the Democrats and a few Republicans. Most Republicans were loyal, terrific & worked really hard. We will return!”

Obamacare boosted the number of Americans with health insurance through mandates on individuals and employers, and income-based subsidies. About 20 million Americans gained insurance coverage through the law.