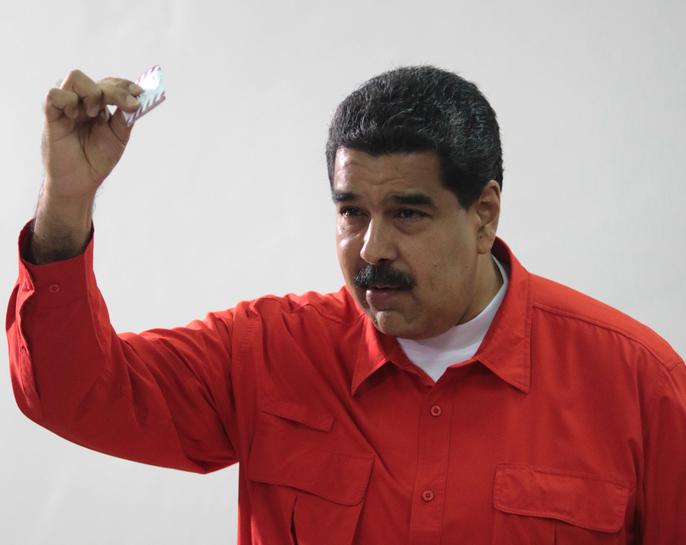 WASHINGTON (Reuters) – The U.S. government slapped sanctions on Venezuelan President Nicolas Maduro on Monday, the Trump’s administration’s toughest move so far against his government in response to Sunday’s election of a legislative superbody Washington denounced as a “sham” vote.

No oil-related measures were included in the announcement, but such measures remain under consideration, according to congressional sources and a person familiar with the White House’s deliberations on the matter.

Under the sanctions, all of Maduro’s assets subject to U.S. jurisdiction were frozen, and Americans are barred from doing business with him, the U.S. Treasury Department’s Office of Foreign Assets Control said.

“By sanctioning Maduro, the United States makes clear our opposition to the policies of his regime and our support for the people of Venezuela who seek to return their country to a full and prosperous democracy,” Treasury Secretary Steven Mnuchin said in a statement.

He said anyone who participates in the new legislative superbody could be exposed to future U.S. sanctions for undermining democracy in Venezuela.

In Caracas on Monday, Maduro celebrated the election of the new legislative superbody, which is expected to give the ruling Socialist Party sweeping powers. He mocked U.S. criticism that the vote on Sunday was an affront to democracy.

The sanctions against Maduro could be followed by measures targeting further senior Venezuelan officials as well as oil-sector measures in an “escalatory process” depending on how far the Venezuelan government goes in implementing the new congress following Sunday’s vote, according to the person familiar with the White House deliberations.

The administration of U.S. President Donald Trump has also weighed possible sanctions against Venezuelan Defense Minister Vladimir Padrino and Socialist Party No. 2 Diosdado Cabello, other U.S. officials have told Reuters. But experts say individual sanctions, while providing strong symbolism, have had little or no impact on Maduro’s policies and that broader oil-sector and financial sanctions may be the only way to make the Venezuelan government feel economic pain.