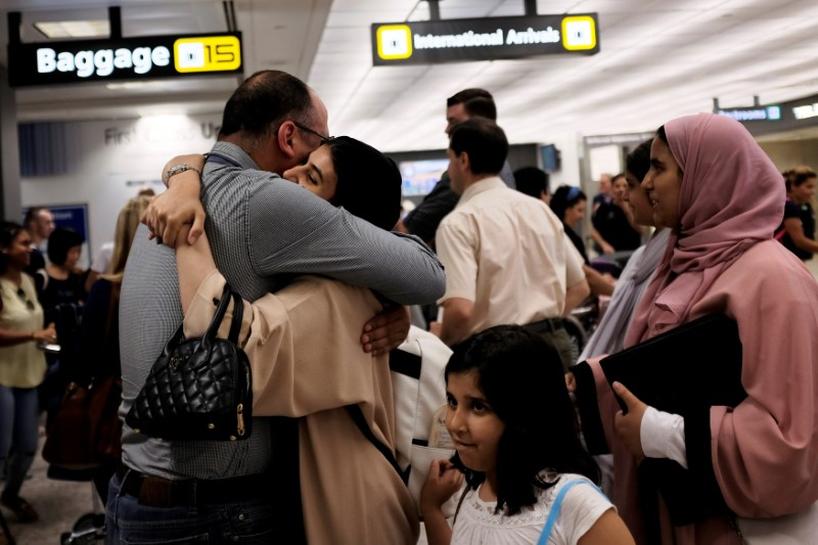 WASHINGTON/NEW YORK President Donald Trump’s temporary ban on people from six predominantly Muslim countries and all refugees entering the United States is finally scheduled to take effect later on Thursday, but in a scaled-back form that still allows in some travelers.

The rollout of the controversial measure follows a Supreme Court decision this week that allowed the executive order to take effect but significantly narrowed its scope, exempting travelers and refugees with a “bona fide relationship” with a person or entity in the United States.

Late Wednesday, the State Department said visa applicants from Iran, Libya, Syria, Somalia, Sudan and Yemen must have a close U.S. family relationship or formal ties to a U.S. entity to be admitted to the United States in keeping with the Supreme Court’s ruling.

Trump first announced a temporary travel ban in January, calling it a counterterrorism measure to allow time to develop better security vetting. The order caused chaos at airports as officials scrambled to enforce it and was blocked by federal courts, with opponents arguing the measure discriminated against Muslims and that there was no security rationale for it.

A revised version of the ban, issued in March, was also halted by courts.

In its decision on Monday, the Supreme Court allowed the ban, which bars people from the designated six countries for 90 days and refugees for 120 days, to go partially into effect until the top court can take up the case during its next term starting in October.

The State Department guidance on the ban, distributed to all U.S. diplomatic posts and seen by Reuters, defined a close familial relationship as being a parent, spouse, child, adult son or daughter, son-in-law, daughter-in-law or sibling, including step-siblings and other step-family relations.

“Grandparents, grandchildren, aunts, uncles, nieces, nephews, cousins, brothers-laws and sisters-in-law, fiancés, and any other ‘extended’ family members,” are not considered close family, according to the cable.

The guidelines also said that workers with an offer of employment from a company in the United States or a lecturer addressing U.S. audiences would be exempt from the ban, but someone who simply made a hotel reservation would not be considered as having a bona fide relationship.

Asked about the guidance, the State Department declined to comment on internal communications.

The Department of Homeland Security is expected to release additional information on Thursday. A Justice Department spokesman declined to comment.

Immigration lawyers and refugee advocates expressed surprise late on Wednesday that fiancés, grandparents and grandchildren would not qualify as close family.

“This unduly limited definition of family excludes many of the very people that Americans are looking forward to welcoming as visitors,” said Eleanor Acer of the group Human Rights First, adding that the guidelines appeared to go against the exceptions outlined by the Supreme Court.

“Barring grandparents,” she said, “is not the way to keep this country safe.”

Refugee resettlement organizations have said they believe their organizations should qualify as having a “bona fide relationship” with the clients they serve, but the State Department cable did not give guidance on that question.

Rana, an Iranian consultant who has been in the United States since 2003 and is married to a U.S. citizen, said no Thursday that she feared the travel ban will only increase the confusion in an already onerous visa system for visitors from her country.

“The way the president is talking, it makes it sound like the doors were open and people were just coming and going. It was always hard, it was never easy,” she said, asking that her last name not be used.

In 2014, Rana’s 65-year-old mother missed her wedding because of a seven-month security clearance process. Her brother, who had a scholarship to a U.S. university in 2008, was never allowed in. The brother now lives with his wife in Canada, and they are thinking of trying to get permission for their mother to visit him there instead of trying again for a U.S. visa.

“This is just adding to chaos,” Rana said. “It is putting a lot of power of interpretation into the hands of the individual visa officers.”

The ban’s looming enforcement also stirred anger and confusion in parts of the Middle East on Wednesday, with would-be visitors worried about their travel plans and their futures.

Airlines in the region said they had not received a directive from the United States, and there were few people at the U.S. Consulate in Dubai, where there is normally a line out the door of people waiting to process visa applications.

On Thursday, Emirates Airline, the Middle East’s largest airline, said its flights to the United States were operating normally. Abu Dhabi-based Etihad Airways said it is allowing nationals from the six countries to board U.S.-bound flights if they have valid travel documents.

Amnesty International said it would be sending researchers to airports in New York City, Washington and Los Angeles to monitor the implementation of the ban.

But Stephen Yale-Loehr, an immigration law professor at Cornell Law School said that since the order only applies to those who have not yet been issued visas, any legal fights will likely not occur right away and could become moot once the ban expires.

“We may see a lot of attorneys standing around at airports tonight with nothing much to do,” Yale-Loehr said.