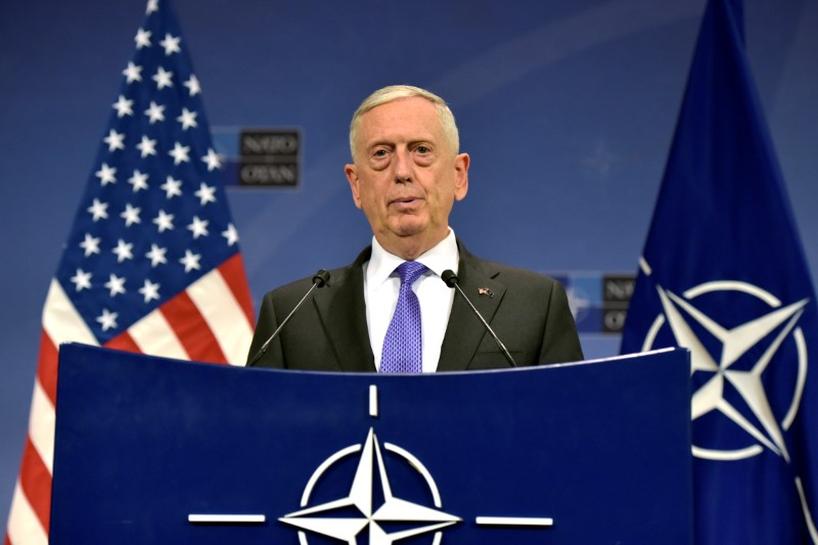 WASHINGTON (Reuters) – Defense Secretary Jim Mattis said on Monday that the United States would know the trajectory of a missile fired by North Korea within moments and would “take it out” if the missile looked like hitting the U.S. Pacific territory of Guam.

U.S. officials and South Korea’s president in recent days have played down the risk of an imminent conflict after Washington and Pyongyang exchanged fiery rhetoric last week.

But Mattis told reporters that war could break out if North Korea were to fire a missile at the United States.

“If they fire at the United States, it could escalate into war very quickly,” Mattis said. The United States would know the trajectory of a North Korean missile “within moments” and if a missile is assessed to be hitting Guam, “we will take it out,” he said.

U.S. President Donald Trump warned last week that the U.S. military was “locked and loaded” if North Korea acted unwisely after threatening to land missiles in the sea near Guam later this month.

Mattis said that if a North Korean missile were headed toward the waters near Guam, instead of aimed directly at the island, then the president would decide what action to take.

Concern that North Korea is close to achieving its goal of putting the mainland United States within range of a nuclear weapon has caused tension to spike in recent months.

World stocks rose along with U.S. Treasury yields and the U.S. dollar as investors regained an appetite for riskier investments amid an easing of Korea tensions.

“There must be no more war on the Korean peninsula. Whatever ups and downs we face, the North Korean nuclear situation must be resolved peacefully,” President Moon Jae-in told a meeting with senior aides and advisers.

“I am certain the United States will respond to the current situation calmly and responsibly in a stance that is equal to ours,” he said.

Mattis and Secretary of State Rex Tillerson on Sunday sent a conciliatory message to North Korea in an op-ed piece in the Wall Street Journal.

“The U.S. has no interest in regime change or accelerated reunification of Korea. We do not seek an excuse to garrison U.S. troops north of the Demilitarized Zone,” the officials said, addressing some of Pyongyang’s fears that Washington ultimately intends to replace the reclusive country’s leadership.

The article took a softer tone on North Korea than the president, who warned Pyongyang last week of “fire and fury” if it launched an attack.

Local residents watch the news on the North Korea crisis, at a restaurant, on the island of Guam, a U.S. Pacific Territory, August 14, 2017.Erik De Castro

“While diplomacy is our preferred means of changing North Korea’s course of action, it is backed by military options,” the two officials said.

“Both the United States and South Korea do not believe North Korea has yet completely gained re-entry technology in material engineering terms,” Suh said in remarks televised on Sunday for a Korea Broadcasting System show.

U.S. Central Intelligence Agency Director Mike Pompeo said on Sunday that North Korean leader Kim Jong Un might conduct another missile test but talk of being on the cusp of a nuclear war was overstating the risk.

“I’ve seen no intelligence that would indicate that we’re in that place today,” Pompeo told “Fox News Sunday”.

However, North Korea reiterated its threats, with its official KCNA news agency saying “war cannot be blocked by any power if sparks fly due to a small, random incident that was unintentional”.

“Any second Korean War would have no choice but to spread into a nuclear war,” it said in a commentary.

The United States and South Korea remain technically still at war with North Korea after the 1950-53 Korean conflict ended with a truce, not a peace treaty.

Ukraine denied on Monday that it had supplied defense technology to North Korea, responding to an article in the New York Times that said North Korea may have purchased rocket engines from Ukrainian factory Yuzhmash.

Tuesday marks the anniversary of Japan’s expulsion from the Korean peninsula, a rare holiday celebrated by both the North and the South. Moon and Kim, who has not been seen publicly for several days, are both expected to make addresses on their respective sides of the heavily militarized border.

Trump has urged China, the North’s main ally and trading partner, to do more to rein in its neighbor, often linking Beijing’s efforts to comments around U.S.-China trade. China strenuously rejects linking the two issues.

Trump on Monday authorized an inquiry into whether to investigate China’s alleged theft of American intellectual property, declaring it “a very big move,” while the country’s largest business lobby group urged the two countries to resolve differences.

Additional reporting by Christine Kim in Seoul and Ben Blanchard in Beijing; Writing by Alistair Bell; Editing by James Dalgleish

‘Enough is enough’: China attacks US at UN Security Council
ShopBack investigating incident involving ‘unauthorised access’ to customers’ personal data
Japan PM Suga and China’s Xi agree to pursue high-level contacts in first talks
NUS plans to form College of Humanities and Sciences next year
Commentary: You don’t have to age and grow frail alone. Nurses have your back