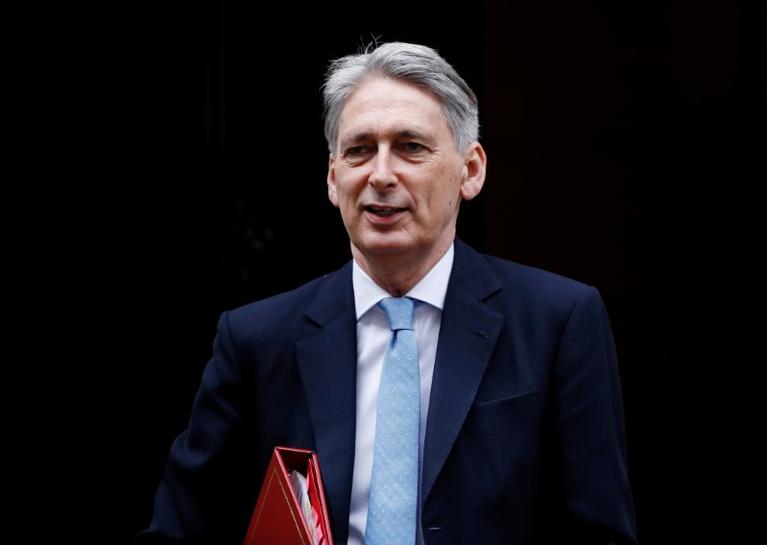 LONDON (Reuters) – Senior members of the government are becoming convinced of the need for a phased British departure from the European Union to help protect the economy, Chancellor Philip Hammond said on Sunday.

Brexit minister David Davis heads to Brussels on Monday for a first full round of talks, with EU officials hoping the British government, yet to set out detailed proposals on several major issues, begins to show more urgency about doing a deal before Britain leaves the bloc in 2019.

Hammond, who supported remaining in the EU at last year’s referendum, is seen as the voice of a so-called ‘soft Brexit’ within Prime Minister Theresa May’s cabinet, favouring prioritising trade ties with the EU over curbing immigration.

With May weakened by a failed election gamble last month which saw her Conservatives lose their parliamentary majority, Britain’s weekend papers were full of stories of infighting as cabinet colleagues reportedly vie for her job.

Hammond, regarded as one potential successor to May, has repeatedly talked about the need for a transitional deal, saying such an arrangement would see Britain replicate as much as possible the existing arrangements in order to minimise the impact on business.

Hammond said the majority of his colleagues now recognised this was “the right and sensible way to go”.

“Five weeks ago the idea of a transition period was quite a new concept, I think now you would find that pretty much everybody around the cabinet table accepts that there will be some kind of transition,” Hammond told BBC TV.

“I think you’ll find the cabinet rallying around a position that maximises our negotiating leverage and gets the best possible deal for Britain.”

Trade minister Liam Fox, who favours making a cleaner break with the bloc, said he did not have a problem with a transition period as long as it was for a limited duration and gave Britain the freedom to negotiate its own trade deals.

Hammond said the government needed to provide as much clarity as possible, as soon as possible, to restore business and consumer confidence and keep the economy moving.

“It is absolutely clear that businesses, where they have discretion over investment, where they can hold off, are doing so … they are waiting for more clarity about what the future relationship with Europe will look like,” he said.

The length of any transition would depend on how long is needed to get new systems in place in areas such as customs and immigration, but it should be a defined period and was likely to need to be “a couple of years,” Hammond added.

Hammond himself was the subject of a number of damaging newspaper stories over the weekend, including one which said he had called public sector workers “overpaid”. The chancellor said he was being attacked for his Brexit views.

“Some of the noise is generated by people who are not happy with the agenda that I have … tried to advance of ensuring that we achieve a Brexit which is focussed on protecting our economy, protecting our jobs and making sure that we can have continued rising living standards in the future,” he said.

Former party leader Ian Duncan Smith told the BBC that there was no appetite among Conservative lawmakers for a leadership contest and said his colleagues should “shut up” and “let everyone else get on with the business of governing”.

Gus O’Donnell, Britain’s former top public official, told the Observer newspaper that the chances of a smooth Brexit were at risk of being derailed by squabbling ministers.

“It appears that cabinet members haven’t yet finished negotiating with each other, never mind the EU,” he said, adding that there was “no chance” all the details of Brexit could be hammered out before the March 2019 deadline.

“We will need a long transition phase and the time needed does not diminish by pretending that this phase is just about ‘implementing’ agreed policies as they will not all be agreed.”