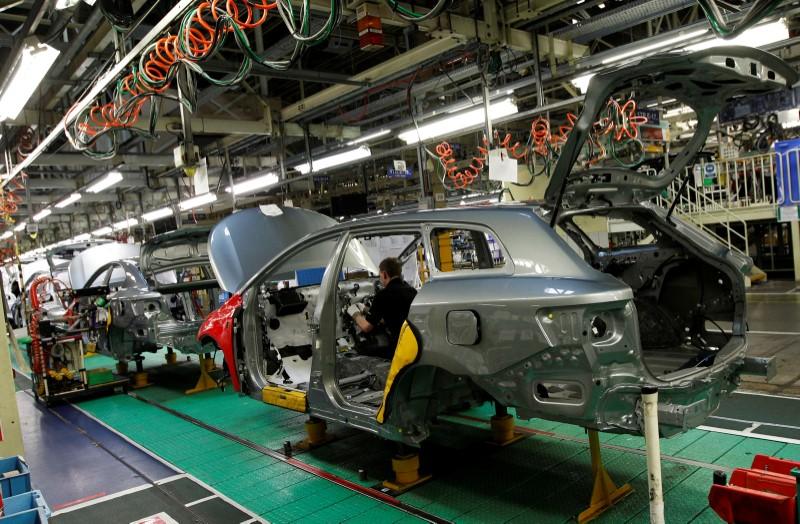 LONDON (Reuters) – British industrial output looks set to make a strong contribution to economic growth in the final months of 2017 but construction is likely to drag, official data showed on Wednesday.

Economic growth slowed in the first nine months of 2017 as higher inflation caused by the fall in sterling after the Brexit vote hurt consumers, although exporters have gained from the weaker pound and the stronger euro zone economy.

Germany reported rapid growth in industrial output on Tuesday and stronger exports and its economy is forecast to grow faster than Britain’s in 2017 and this year.

British industrial output rose by a monthly 0.4 percent in November, compared with 0.2 percent in October, spurring an annual rise of 2.5 percent. Economists taking part in a Reuters poll had expected to see output rise 0.3 percent on the month and 1.8 percent on the year.

Manufacturing, which makes up the bulk of the industrial sector, enjoyed an especially strong three months to November, with output 3.9 percent higher than a year before, its biggest rise since March 2011.

“There was strong and widespread growth across manufacturing with notable increases from renewable energy projects, boats, planes and cars for export,” ONS statistician Ole Black said.

The ONS said construction output in the three months to November dropped by 2.0 percent compared with the previous three months, the biggest decline since August 2012. Private housebuilding provided the only positive news.

Figures for the services sector – which is around eight times the size of manufacturing and has been growing slowly – are due to be released on Jan. 26.

Britain’s economy grew at a quarterly rate of 0.4 percent in the three months to September.

The Bank of England said in November it expected a repeat of that performance in the last three months of the year, after it raised its key interest rate for the first time since 2007.

A major business survey from the British Chambers of Commerce earlier on Wednesday showed rapid growth in manufacturing sales cooled in the fourth quarter.

ONS data showed Britain’s goods trade deficit with the rest of the world widened to a five-month high of 12.231 billion pounds in November – bigger than all forecasts in a Reuters poll that had pointed to a deficit of 10.7 billion pounds.

The picture was better in volume terms, however. Goods exports in the three months to November were 9.1 percent higher than a year ago, while imports were up 2.6 percent.