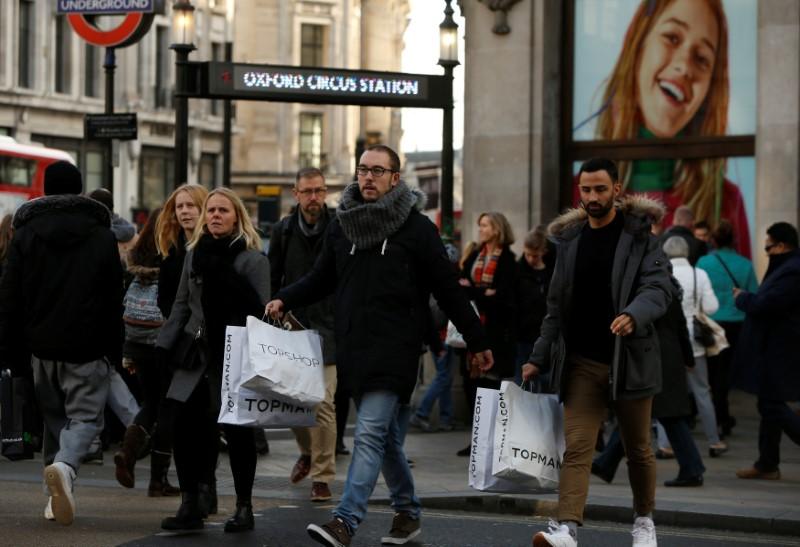 LONDON (Reuters) – British inflation eased off its post-Brexit vote high in December, official data showed on Tuesday, suggesting the financial squeeze on many households could be about to get a little bit easier.

Consumer price inflation slipped to an annual rate of 3.0 percent in December, below November’s nearly six-year high of 3.1 percent and the first fall since June.

The figure was in line with the median forecast of economists in a Reuters poll.

Inflation jumped in Britain after the decision by voters in June 2016 to leave the European Union which hammered the value of the pound and pushed up the cost of imports.

In the euro zone, inflation was just 1.4 percent in December, less than half the rate in Britain.

The combination of high inflation and slow wage growth – as well as uncertainty about the terms on which Britain will leave the EU in 2019 – is expected to mean Britain grows more weakly than other European economies this year.

Consumer price growth looks set to wane as the peak impact from sterling’s sharp fall in mid-2016 drops out of the data.

But the Office for National Statistics said it could not yet declare that inflation was definitely on the slide.

“It remains too early to say whether today’s slight fall is the start of any longer-term reduction in the rate of inflation,” James Tucker, an ONS statistician, said.

However, pressure in the pipeline grew as factory gate prices rose, confounding predictions of a fall.

The Bank of England has said it expects inflation peaked in late 2017 before falling slowly over the next three years to just above its 2 percent target.

Many private economists think the fall in inflation could be faster, possibly subsiding to 2 percent this year.

The BoE is widely expected to keep interest rates unchanged at 0.5 percent next month as it waits for signs that wages are rising more quickly.

On Monday, BoE rate-setter Silvana Tenreyro said she felt the central bank had “ample time” to look at the impact of its rate hike in November – the first in more than a decade – before moving again.

The alternative measure of retail price inflation, which is used to calculate payments on government bonds and many commercial contracts, rose to a six-year high of 4.1 percent – pushed up by higher mortgage bills after the BoE rate hike.

Among manufacturers, the cost of raw materials – many of them imported – was 4.9 percent higher than in December 2016, down from 7.3 percent in November and the weakest increase since July 2016.

Economists polled by Reuters had expected input prices to rise by 5.4 percent.

But manufacturers increased the prices they charged by 3.3 percent compared with a rise of 3.1 percent in November, stronger than all forecasts in the Reuters poll.

The ONS also said house prices in November rose by an annual 5.1 percent across the United Kingdom as a whole, slowing from October. Prices in London alone rose by a weaker 2.3 percent, the smallest increase since March.