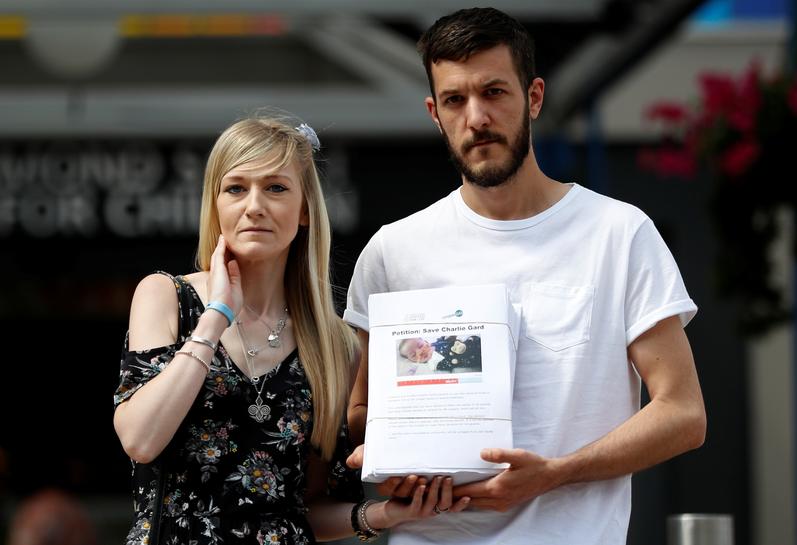 LONDON (Reuters) – A British judge will rule on Wednesday on where terminally ill baby Charlie Gard will spend his last moments before his life support system is switched off, unless a last-ditch attempt by his parents to bring him home is successful.

The 11-month-old baby, who suffers from an extremely rare genetic condition causing progressive brain damage and muscle weakness, has been at the centre of a harrowing dispute between his parents and the London hospital caring for him.

The case has resonated far and wide, triggering a heated debate about who should decide a child’s fate and drawing comment from U.S. President Donald Trump and Pope Francis.

Charlie’s parents, Connie Yates and Chris Gard, wish to take him home and spend several days with him before his ventilation tube is removed. Great Ormond Street Hospital said on Tuesday this was impossible for practical reasons.

The parents’ lawyer accused the hospital of putting “obstacle after obstacle” in the way.

But the hospital said that given the intensive care Charlie needs, it was not practical to get the equipment needed into his parents’ home, nor could a specialist doctor be found to oversee his treatment in a domestic environment.

Nicholas Francis, the High Court judge who has presided over an agonising series of hearings on the case, gave the parents until Wednesday to find a team of intensive-care specialists willing to oversee Charlie’s care at home.

Failing that, the judge will make a ruling on where Charlie’s life should end. He indicated on Tuesday that the best option may be a hospice – a possibility supported by the hospital and preferred by the parents to a hospital death.

Charlie Gard’s parents Coonie Yates and Chris Gard arrive at the High Court ahead of a hearing on their baby’s future, in London.Peter Nicholls

The court heard that the parents wanted to spend four days with their son away from the hospital before his life support was withdrawn, but it is likely instead to be only a few hours.

Charlie’s mother made a desperate appeal late on Tuesday for a medical team to come forward to help bring Charlie home.

“We promised Charlie every day we would take him home,” she was quoted as saying by British media. “It seems really upsetting after everything we’ve been through to deny us this.”

Great Ormond Street, a renowned centre for the treatment of sick children, said it has moved “heaven and earth” to try and make it possible for Charlie to die at home, but the logistical challenges and risk of a “disordered” death were insurmountable.

Yates and Gard had wanted to take him to the United States to undergo experimental treatment, against the advice of Great Ormond Street doctors who said it would not help and would only prolong the baby’s suffering.

British courts, backed by the European Court of Human Rights, refused permission, saying the parents’ plan was not in Charlie’s best interests.

The parents gave up the legal battle on Monday, saying that the latest scans showed Charlie’s condition had deteriorated to the point that no recovery was possible. But they remain convinced that the treatment might have helped Charlie had he received it months ago.

The hospital disagrees. It says Charlie had suffered irreversible brain damage by January as a result of a series of seizures, and his responsiveness has not changed since then.

US State Department Official Lands in Taiwan Ahead of Memorial Service
China reports 6 new COVID-19 cases versus 12 a day earlier
IN FOCUS: Livelihoods, environment on the line as Thailand pushes for new industrial park
Thai protesters kick off weekend of rallies
Lhasa Braces For Air-Raid Drill as China Responds to India’s Purchase of French Jets