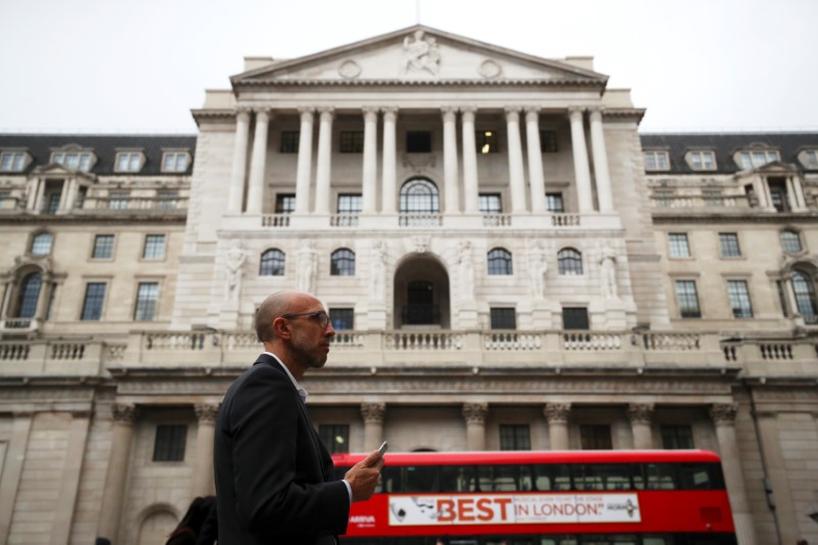 LONDON (Reuters) – The Bank of England and the insurers it regulates must find common ground over proposed tweaks to European Union rules so that the 1.9 trillion pound sector stays competitive after Brexit, a panel of UK lawmakers said in a report on Friday.

FILE PHOTO – A man holds his mobile phone outside the Bank of England in London, Britain, October 17, 2017. REUTERS/Hannah McKay

The capital rules dubbed Solvency II were introduced in January last year after a decade in the making, costing insurers millions of pounds to implement and representing the single biggest regulatory task for the Bank of England’s Prudential Regulation Authority (PRA).

Parliament’s Treasury Select Committee (TSC) report recommended several changes, saying it was concerned at the extent of disagreement between the PRA and industry over what can be changed by UK regulators, and what needs EU intervention.

“Such disagreements do not foster good policymaking,” the report said. “The Committee strongly encourage the insurance industry and the PRA to come to an understanding on what aspects of Solvency II can be changed unilaterally while the UK remains an EU member state.”

The lawmakers want a “roadmap” on what changes can be done by Britain and what must be left to the EU. It should include action post-Brexit to benefit consumers and the competitive standing of the British industry internationally.

“We will give the findings careful consideration and we look forward to providing a progress report as requested by the end of March 2018,” a PRA spokesman said.

The report noted industry concerns that the PRA is too focused on capital and not enough on allowing insurers to compete.

The overriding priority should be to develop regulation which is right for the UK insurance industry, the report said. “We would expect the UK regulators — with close input from the industry and HM Treasury — to work on this task.”

The Association of British Insurers (ABI), which represents an industry whose members control assets worth some 1.9 trillion pounds, said insurers will be vital in helping the UK thrive after Brexit. “We can only do this if we have a well-balanced regulatory system with pragmatic implementation of the Solvency II regime,” ABI Director General Huw Evans said.

Britain is due to leave the EU in March 2019 but is negotiating a transition period, during which it could still be subject to EU rules for two years or more, giving little room for going it alone with major changes in that time.

The report says the insurance sector should be treated as a priority in those negotiations to avoid cross-border insurance contracts being disrupted.

The PRA proposed tweaks this week, but they did not include easing the “risk margin”, a major bone of contention with insurers which the TSC report wants addressed urgently.

This refers to an add-on capital requirement to cover what a third party would need to safeguard policies if an insurer goes bust.

PRA Chief Executive Sam Woods has said he does not want to unilaterally change the margin, saying it should be left to an EU review, which could take time.

In the meantime, the lawmakers worry that UK business is being reinsured more cheaply overseas because of risk margin costs, and industry officials quoted in the report urge the PRA to take action now and not wait for any EU amendments.

“The Committee concurs and asks the PRA for an update on the best approach for improving the risk margin calibration,” the report said.