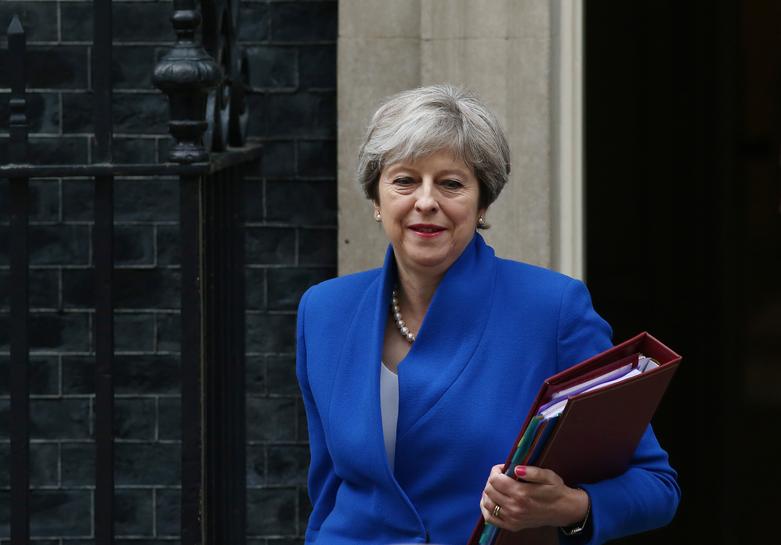 BELFAST (Reuters) – Britain will consider replacing European Union funding for peace projects in Northern Ireland, which advocates say have been crucial in avoiding a return to violence after a 1998 peace agreement, Prime Minister Theresa May said on Wednesday.

By the time Britain leaves, the EU will have provided more than 1.5 billion euros (1.36 billion pounds) in funding for Northern Ireland projects targeted at healing the wounds of three decades of violence between Irish nationalists and British unionists in which over 3,600 died.

The funds, which have been used for projects that support victims of the conflict, foster links between Catholic and Protestant communities and help former militants from both sides find work, are due to end in 2020, a year after Britain’s 2019 exit.

“We want the EU funding that has helped victims of the Troubles and cross-community groups to continue at least until the current programme finishes,” May said in an article in Northern Ireland’s Irish News newspaper.

“We then want to go further, and explore a potential future programme of peace funding after we leave the EU,” May said.

Northern Ireland has been one of the largest recipients of EU funding and is due to receive about 3.5 billion euros between 2014 and 2020, including funding for the agriculture sector.

Advocates of the peace projects have warned that slashing funding would leave the province more exposed to extremism and make it harder to avoid street violence in so-called “interface areas” where Irish nationalists and British unionists live in close proximity.

While no one is predicting a return to the kind of violence seen in Northern Ireland in the 1970s and 1980s, Northern Ireland politicians have warned that Brexit is likely to add to sectarian tensions and could entrench a political standoff that has damaged the economy.

The Irish government has said a British exit from the EU’s customs union would likely require physical infrastructure on the border between Ireland and Northern Ireland, a move that would anger Northern Ireland’s Irish nationalists who aspire to a united Ireland.

The British government on Wednesday released a position paper saying that it did not want physical border checks between Ireland and Northern Ireland. May told the Irish News there “can be no question of imposing a new customs border.”

Brexit supporters have argued that savings from leaving the European Union would outweigh the billions of euros in funding the EU provides to the United Kingdom in areas like regional development, agriculture and environmental projects.

But the British government has not said that it will replace funding for all of the projects directly, and Northern Ireland peace projects will have to compete for UK budget funds with areas like health and education.

“There may be specific and valuable EU programmes for which we want to agree the continuation of funding,” May said in the article. “Peace funding in Northern Ireland is one of them.”