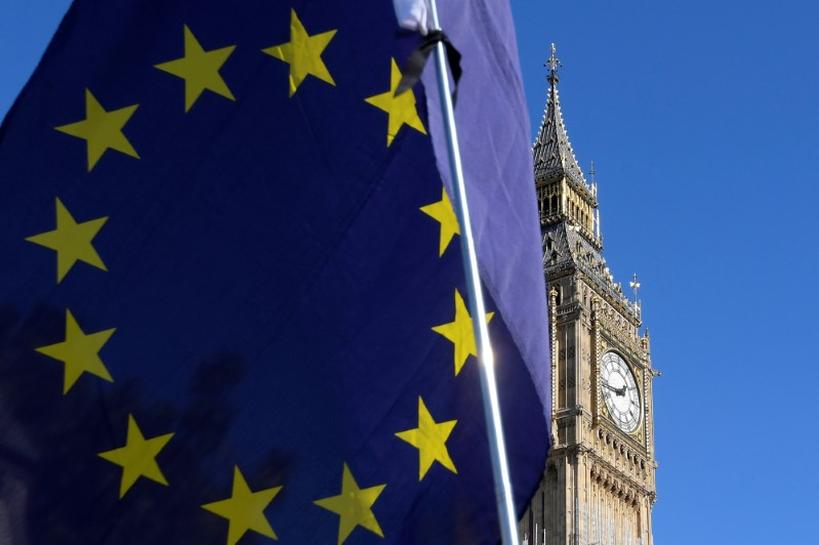 LONDON (Reuters) – Britain believes it can quickly agree a framework for a transitional agreement on exiting the European Union, Prime Minister Theresa May’s spokesman said on Tuesday, even as other stark differences over the Brexit timeline persisted.

An EU flag is waved near the Houses of Parliament in central London, Britain September 22, 2017. REUTERS/Toby Melville

Britain is seeking a so-called implementation period of around two years following its departure from the EU in March 2019, during which its access to the EU single market would stay largely unchanged while new arrangements are put in place.

Businesses are keen to see the details of such a deal as soon as possible to end uncertainty over the trading rules they will face after Britain leaves the bloc.

“In terms of the broad outline of an implementation period, we believe that we can agree that quickly,” May’s spokesman said. He did not provide further detail on when Britain hoped to reach such an agreement.

“We’re clear that we want to achieve this implementation period, that we believe we can do so, and that our priority is to provide certainty for business,” he said.

May left some businesses confused on Monday by saying any implementation period would not be agreed until a deal was struck on Britain’s future trading relationship with the bloc.

That countered expectations that a transitional deal would come well before any deal on trade.

It also highlighted a clear difference between Britain and the EU over when a trade deal would be agreed.

Britain is seeking an “ambitious” deal on trade with the EU to replace its existing arrangement at the end of an implementation period. It believes its current close ties with the bloc mean such a deal will be agreed by October 2018.

But the EU’s chief negotiator, Michel Barnier, said it would take three years to negotiate a trade deal, meaning that if talks start in December it would be ready in time for the end of a transition period running until December 2020.

In response, asked if it was Britain’s position that it could still achieve a trade deal by the end of next year under the two-year exit process, May’s spokesman said: “Yes”.

Commenting on the timeline set out by Britain, an EU official said the bloc wanted to “define a framework for our future relationship” by this time next year so that a withdrawal treaty could “take account” of that future under the terms of the ‘Article 50’ legal exit process.

However, the official said the EU will only negotiate on the details of a free trade deal after Britain has actually left in March 2019 because the EU’s own laws do not allow it to negotiate trade agreements with its own members.

“Article 50 says that the withdrawal agreement has to take into account our future relationship, so we will know the terms of our partnership with the EU by our exit,” a spokeswoman for May said when asked about the position set out by the EU official.

“But as to the details, that’s subject to negotiation and I can’t pre-empt those.”