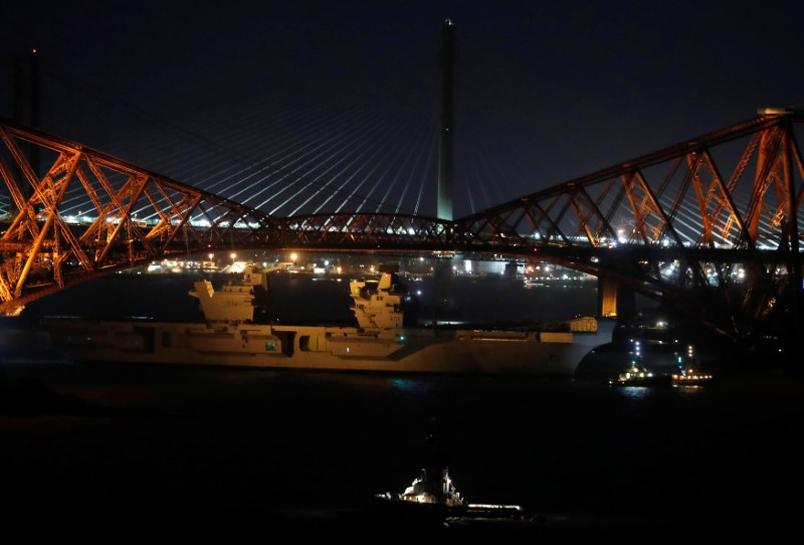 ROSYTH, Scotland Britain’s most advanced and biggest warship, 65,000-tonne aircraft carrier HMS Queen Elizabeth, set out on its maiden voyage on Monday from the Rosyth dockyard in eastern Scotland.

The ship, which measures 280 metres and can move 500 miles a day, took 11 tugs to manoeuvre out into the River Forth and then must wait for low tide so as to pass under the Forth’s famous bridges – weather and systems checks permitting.

It took eight years to build HMS Queen Elizabeth and along with its sister ship, HMS Prince of Wales, it is part of a defence programme worth 6 billion pounds ($7.65 billion), with building and fitting spread over six different shipyards across Britain. It will now spend around two years in sea trials.

“Of course they are expensive, absolutely, it keeps us in the premier league among nations around the world,” Commanding Officer Captain Jerry Kyd told Sky News.

“The fact is that they are not just ships, but sea bases able to do a whole range of functions and missions … whether that’s engaging with the enemy at long range or indeed supporting British industry abroad or perhaps even assisting with disaster relief or humanitarian aid.”

The ship’s navigator Jez Brettell compared handling the ship on its maiden voyage to taking out a brand new sports car before it had been road-tested.

“The first time we put those levers forward will be the first time that we will have been under our own power and moving,” he told the BBC.

It was scheduled to be fully operational by 2020 but that date may now be as late as 2026, Britain’s National Audit Office said earlier this year, because of technical difficulties.

(Reporting by Russell Cheyne and Elisabeth O’Leary in Edinburgh; Editing by Alison Williams)