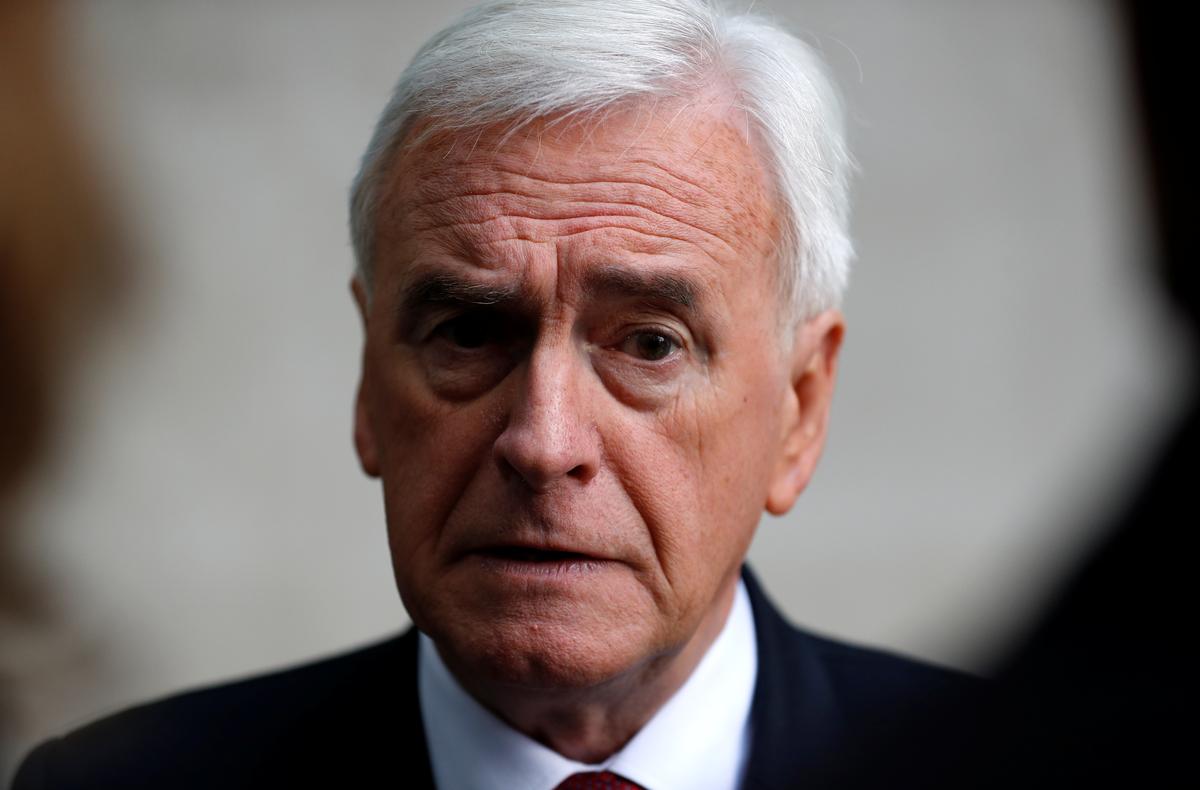 John McDonnell, the second most influential man in the party, said Labour accepted proposals made in an independent report to more aggressively tax transactions, and said these would be reflected in their next policy pledges for government.

The move prompted an immediate outcry from the industry, with trade bodies saying the proposal was deeply irresponsible at a time of huge uncertainty for the British capital ahead of Brexit.

“All you want to hear from me is whether we are going to adopt the policy: yes” McDonnell said at the launch of the Intelligence Capital report. “They have come up with proposals which I think are unchallengeable in terms of how they can implement what we want.”

Britain is not due to hold another election until 2022, but with the country’s political system in gridlock over Brexit, Prime Minister Boris Johnson has proposed holding a snap election soon to break the impasse.

While opposition parties have refused to agree for now – wanting instead to prevent Britain from leaving the European Union without a deal – they are likely to agree to one later this year.

McDonnell has been at the vanguard of a left-wing shift in Britain’s main opposition party alongside leader Jeremy Corbyn. Once led by Tony Blair and Gordon Brown, it now proposes sweeping nationalization and an overhaul of the banking system.

The 68-year-old McDonnell held a series of meetings with top finance executives in 2017, setting out how it would levy taxes on one of the world’s biggest financial trading centers if it won power from the Conservative Party.

At the time it proposed expanding an existing tax on shares to include trading on other assets such as bonds and derivatives. Set at around half of a percentage point on the value of a trade, it was predicted then to raise 4.7 billion pounds a year.

The report released on Thursday said that tax could be extended further to include transactions within the wholesale foreign exchange market, including FX spot and derivatives, interest rate derivatives and commodities. It proposed taxing end user purchasers who are tax resident in Britain.

TheCityUK, representing financial and related professional services, said London was already locked in a battle to fend off rival centers from luring companies and jobs away due to Brexit, and that plans such as these would make that much harder.

“The UK is a world-leader in financial and related professional services, but our lead will not last long if we start booting balls into our own net,” Chief Executive Miles Celic said.

Foreign exchange – the largest and most interconnected of global markets and worth trillions of dollars a day – is the crown jewel of London’s financial services industry.

“At a time of great uncertainty for business we would encourage policymakers to focus on proposals that would support the growth and competitiveness of the UK’s financial sector.”