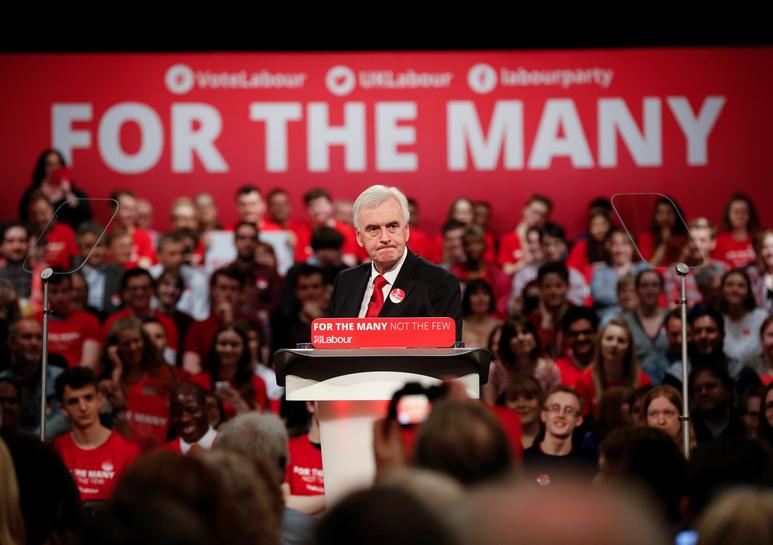 LONDON Britain’s opposition Labour Party will offer voters in Thursday’s election the prospect of a cut in value-added tax, the party’s top finance official John McDonnell was quoted as saying by a newspaper.

The interview was conducted before Saturday’s van and knife attack in London which has prompted political parties to suspend campaigning ahead of the June 8 vote.

McDonnell, who would be finance minister if Labour pulls off one of the biggest electoral surprises in British history, told The Observer newspaper that VAT cuts could be introduced once he has raised income taxes for higher earners.

“What we are saying is that the concept of fairness is at the heart of everything we do,” McDonnell said.

“When it comes to tax, it will always be a fair tax policy. And if I can reduce the burden of taxation on middle and low earners I will do it as we grow the economy. I will do it.”

Asked by The Observer for details of his plan, McDonnell said: “I think VAT is a real problem for many people. When we come out of Europe there is more flexibility on VAT, particularly in terms of the lower levels.”

Labour has promised to wipe out the deficit in Britain’s day-to-day public spending within five years, excluding other areas such as investment. The Conservatives of Prime Minister Theresa May say they will get rid of the overall budget deficit by the mid-2020s. Four opinion polls published on Saturday showed Labour gaining ground on the Conservatives, with one giving May’s party a lead of just one percentage point.

May has said she would not raise VAT if she wins the election but has declined to go as far as her predecessor David Cameron who promised before an election in 2015 not to raise income tax or national insurance contributions either.

A minister in May’s government appeared to make a new tax promise to voters late on Friday when he said income tax would not rise for higher earners. May sought to downplay the comments on Saturday, saying there had been no change to her tax plans.