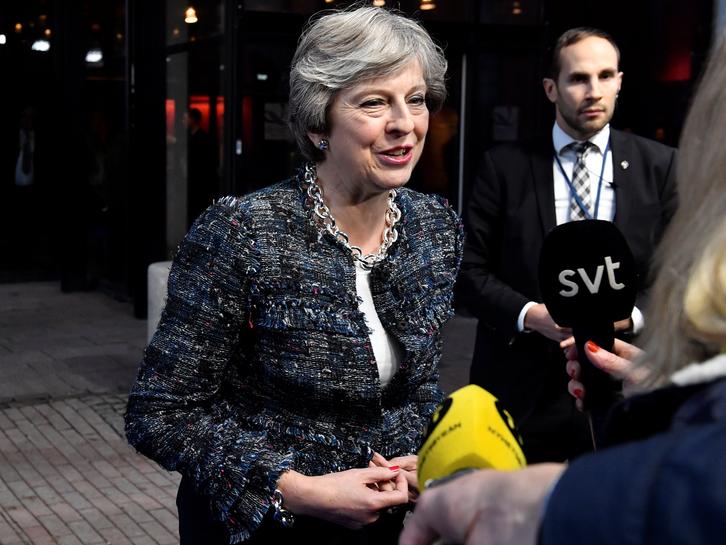 GOTHENBURG, Sweden (Reuters) – Britain will honour its commitments to the European Union, Prime Minister Theresa May said again on Friday, trying to reassure increasingly frustrated leaders who want London to spell out how much it will pay on Brexit.

Britain’s Prime Minister Theresa May arrives for an EU Social Summit for Fair Jobs and Growth in Gothenburg, Sweden November 17, 2017. TT News Agency/ Jonas Ekstromer/ via REUTERS ATTENTION EDITORS – THIS IMAGE WAS PROVIDED BY A THIRD PARTY. SWEDEN OUT. NO COMMERCIAL OR EDITORIAL SALES IN SWEDEN.

May will hold meetings with leaders on the sidelines of an EU summit on labour and social reform in Gothenburg, Sweden, to try to break deadlock over the so-called divorce settlement that has all but frozen Britain’s talks to leave the bloc.

With 16 months before Brexit day, Britain needs to open the way to start discussions on the future trading relationship with the bloc to offer businesses, which are threatening to leave the country, some certainty in taking any investment decisions.

Under pressure at home from MPs in her own party who are concerned she is preparing for Britain to walk away with no deal and from EU officials to increase her opening bid, May’s main focus in Gothenburg will be a meeting with Donald Tusk, the summit chair who is overseeing the Brexit process.

“For the negotiations, those continue, and obviously we look forward to the December European council and continuing to look through the issues. I was clear in my speech in Florence that we will honour our commitments,” she said, referring to a speech in Italy two months ago when she last sought to re-set the talks.

“I’ve set out a vision for that economic partnership. I look forward to the European Union responding positively to that so we can move forward together,” she told reporters.

May has long said Britain will “honour its commitments” but EU officials are urging the prime minister to detail which ones, and, if not demanding a total sum, to at least give them an idea of the shape of her proposed settlement.

But May, weakened after losing her Conservative Party’s majority at a June election she did not need to call, has little room for manoeuvre. Some of her team of ministers are pressing her to hold off from naming a figure, seeing it as one of the few levers Britain has to press for better trade deal.

Tusk will remind May, according to an EU source, that “time is short” to deliver the kind of progress needed for EU officials to give the green light at the mid-December summit to opening talks on the future relationship.

The Union’s chief negotiator, Michel Barnier, has said he needs to hear more from Britain on three key divorce conditions, including the financial settlement, by the start of next month if the EU is to be in a position for all 27 other national leaders to trigger the second phase at a summit on Dec. 14-15.

Britain’s Brexit minister David Davis, who addressed German businesses in Berlin on Thursday as part of London’s wider efforts to unlock the talks, said on Friday it was clear many EU leaders wanted to move the talks forward.

“Of course they are saying that (more money is needed before progress) but the other thing that is also clear is that many of them do want to move on. It’s very important to them,” Davis told BBC radio.

“Countries like Denmark, countries like Holland, countries like Italy and Spain, countries like Poland can see the big, big benefits in the future deal that we are talking about,” he said, describing Germany and France as the key powers, which have been at the forefront of the push for Britain to offer more.

In Dublin, British foreign minister Boris Johnson tried to ease concerns on another front by saying no one wanted a return to a hard border with EU member Ireland, which some fear could usher in a return of the Troubles, three decades of violence between Irish nationalists and British unionists.

He said the border issue could only be resolved as part of the second phase of talks on future trade relations.

But Ireland’s Prime Minister Leo Varadkar was withering in his criticism of Britain, saying in Gothenburg: “Sometimes it doesn’t seem like they’ve thought all this through.”

Additional reporting by Philip Blenkinsop and Robert-Jan Bartunek in Brussels and Padraic Halpin in Dublin; Editing by Alastair Macdonald