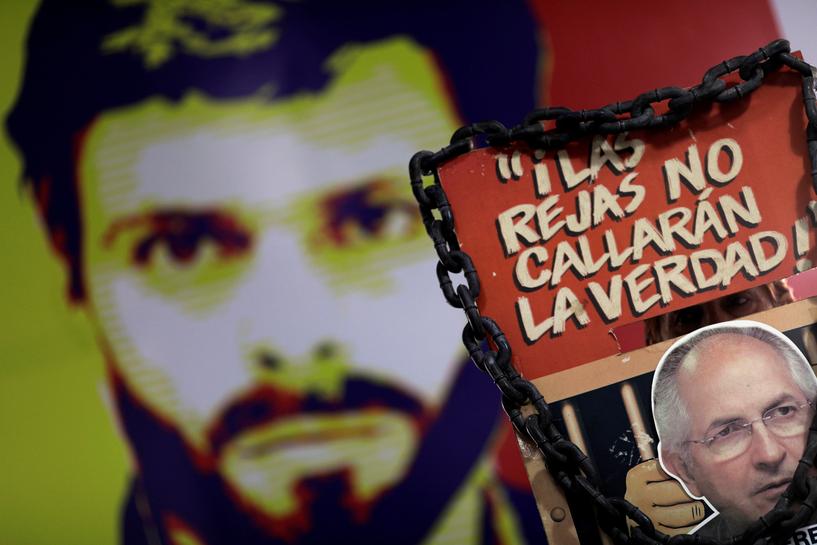 CARACAS (Reuters) – Venezuela jailed two leading critics of President Nicolas Maduro on Tuesday in a fresh blow to the opposition after the election of a new political body with absolute powers to strengthen the hand of the leftist government.

The United States imposed sanctions on Maduro on Monday, calling him a “dictator” for Sunday’s election of a constituent assembly that the opposition boycotted and denounced as illegitimate.

In a statement announcing the jailing of opposition leader Leopoldo Lopez and veteran politician Antonio Ledezma, the pro-government Supreme Court said they were planning to flee the country and had violated terms of their house arrest by making political statements and speaking to media.

But government opponents called the abrupt removal of the men from their homes by security forces in nighttime raids a sign of Maduro’s determination to silence rivals and stamp out four months of massive street protests against him.

About 120 people have been killed in the unrest, including at least 10 during Sunday’s vote.

Both Lopez and Ledezma had been urging protests against Sunday’s vote, which they charged was rigged and a naked power grab by Maduro.

In addition to rewriting the constitution and superseding other institutions, the constituent assembly will have the power to dissolve the opposition-led congress, eliminating any formal political challenge to Maduro.

Lopez had been held more than three years in a military jail until last month, when he was unexpectedly released in what was seen as a potential breakthrough in the country’s long-running political standoff.

Attempts to get the opposition and the government to reach a negotiated deal subsequently floundered, however, and allies said Lopez, 46, may have been jailed again because he rejected government proposals.

“They have kidnapped Leopoldo Lopez because he simply would not break under the pressures and false promises of the regime,” said Freddy Guevara, a legislator in the Popular Will party led by Lopez.

A U.S.-educated economist and former mayor in Caracas, Lopez is beloved by some in the opposition for his hardline anti-government stance and has become an international cause celebre.

The government sees him as an elitist coup-monger, and even some opposition sympathizers have criticized him for being hot-headed and authoritarian.

Lopez himself suspected he would be detained again, and had recorded a video alongside his wife Lilian Tintori in which he urged Venezuelans to keep fighting even if he was put back behind bars.

“If you’re seeing this video it’s precisely because that’s what happened, they jailed me again, illegally and unjustly,” said Lopez, in the video shown on social media on Tuesday.

Blamed by many for an unprecedented economic crisis and rising levels of poverty in Venezuela, Maduro has faced almost daily protests demanding freedom for jailed politicians, humanitarian aid to combat food and medicine shortages, and early elections to replace him.

Condemnation of Tuesday’s arrests came, among others, from the United Nations human rights chief, the president of the European Parliament, and U.S. Secretary of State Rex Tillerson, who called the re-arrests “very alarming.”

Lopez and Ledezma were both taken from their homes to Ramo Verde, a military jail in a slum area about an hour’s drive from the capital, according to lawyers and family.

Lopez was originally arrested for his role in leading street demonstrations against Maduro. Ledezma, a 62-year-old veteran politician, had been arrested on charges of plotting a coup.

Maduro accuses the opposition of continuing to seek a coup against him and says the constituent assembly is designed to bring peace back to the volatile nation.

The opposition-controlled congress, whose days may now be numbered, condemned the creation of the constituent assembly in a session held on Tuesday.

Ambassadors from Britain, France, Mexico, and Spain attended the session. Underscoring fears of escalating violence in the South American nation, the UK said all dependents of embassy staff in Caracas had been withdrawn.