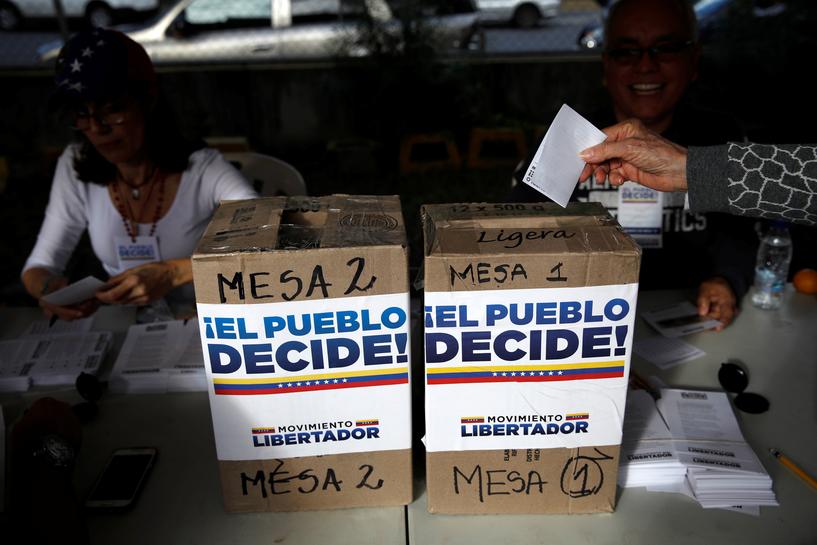 CARACAS/SAN CRISTOBAl, Venezuela (Reuters) – Venezuela’s opposition kicked off an unofficial referendum on Sunday to increase pressure on President Nicolas Maduro as he seeks to create a legislative superbody that his adversaries call the consolidation of a dictatorship.

The symbolic poll, which also asked voters if they want early elections, is intended to further dent Maduro’s legitimacy amid a crippling economic crisis and months of anti-government protests that have led to around 100 deaths. (Graphic – Venezuela’s dark days tmsnrt.rs/2pPJdRb)

The opposition has cast the vote, which began at 7 a.m. local time at some 2,000 centers around the country, as an act of civil disobedience to be followed by “zero hour,” a possible reference to a national strike or other escalated actions against Maduro.

Queues formed early at many polling stations in the oil-rich nation of 30 million as Venezuelans furious over food shortages and rampant inflation sought to make their voices heard.

“We want this government of Nicolas (Maduro) out. We’re tired of not seeing solutions, there are people dying of hunger,” said Mercedes Guerrero de Ramirez, an 80 year-old former hospital worker, who arrived at the polling station at 5:30 a.m. in San Cristobal city near the Colombian border and was first in line.

But the vote does not appear to augur a short-term change of government or a solution to the country’s political stalemate.

Maduro, 54, said the plebiscite is illegal and meaningless. Instead, the leftist leader is campaigning for an official July 30 vote for the new assembly, which will be able to rewrite the constitution and dissolve state institutions.

Voters on Sunday are being asked three questions: if they reject the constitutional assembly, if they want the armed forces to defend the existing constitution and if they want elections before Maduro’s term in office ends in 2018.

“The reality of tomorrow will be very different from that of today,” said National Assembly president Julio Borges on Sunday morning.

“When dawn breaks on Monday, we will see all that was achieved today … There has to be a profound change in how this country is run.”

Some public employees, under government pressure not to participate in opposition events, are seeking creative ways to vote in the plebiscite without being noticed.

The vote also includes participation of the swelling ranks of Venezuelans who have moved abroad to escape the OPEC nation’s increasingly dire economic panorama. Venezuelans waving flags and chanting “no more dictatorship” were casting ballots from Florida to Australia.

The opposition is hoping millions will turn out and promises the results will be available by Sunday evening.

People stand in line to cast their votes during an unofficial plebiscite against Venezuela’s President Nicolas Maduro’s government and his plan to rewrite the constitution, in Caracas, Venezuela July 16, 2017.Marco Bello

But they face some major obstacles.

They will not have access to traditional electoral infrastructure for the hastily convened plebiscite, and the elections council – which the opposition calls a pawn of Maduro – is simultaneously holding a test-run for the July 30 vote.

Also, state telecommunications regulator Conatel has ordered radio and TV stations not to use the word “plebiscite” on air and has told them to pull opposition ads for the vote, according to Venezuela’s main organization of media workers.

A high turnout would reflect widespread national dissatisfaction with Maduro and boost the opposition campaign to remove him, while low attendance would give the ruling Socialist Party a boost for the constitutional assembly.

Government officials say the plebiscite violates laws requiring elections to be organized by the elections council.

“We are not going to let the Venezuelan right wing impose themselves and harm the people,” said Socialist Party Vice President Diosdado Cabello during a Saturday rally for the constitutional assembly.

The vote comes against the backdrop of near daily opposition protests, in many of which masked youths with stones, Molotov cocktails and homemade mortars have battled riot forces using tear gas, water cannons and rubber bullets.

The unrest has caused fatalities among both demonstrators and security forces, mostly from gunshots, as well as hundreds of arrests and thousands of injuries since April.

Last week, seven National Guard troops were injured by an explosion along an avenue in Caracas, which the government blamed on the opposition.

And on Friday, a video circulating on social media showed a man being punched, kicked, stomped and hit in the head with weapons and riot shields after being thrown on the ground by a half-dozen security officials. He was then loaded onto a motorcycle and driven away with blood on his face.

A second video shows men in uniform smashing the windows of a car after what appears to be a scuffle with a woman on the sidewalk. Reuters was unable to independently confirm the veracity of the videos.

Maduro has repeatedly refused to recognize the authority of the National Assembly since the opposition won control of it in a 2015 landslide election, which his critics call evidence he is eroding democratic institutions in order to retain power.

The former union organizer says the country is victim of an “economic war” and that opposition protests are an effort to overthrow him with U.S. connivance, which the United States has denied.