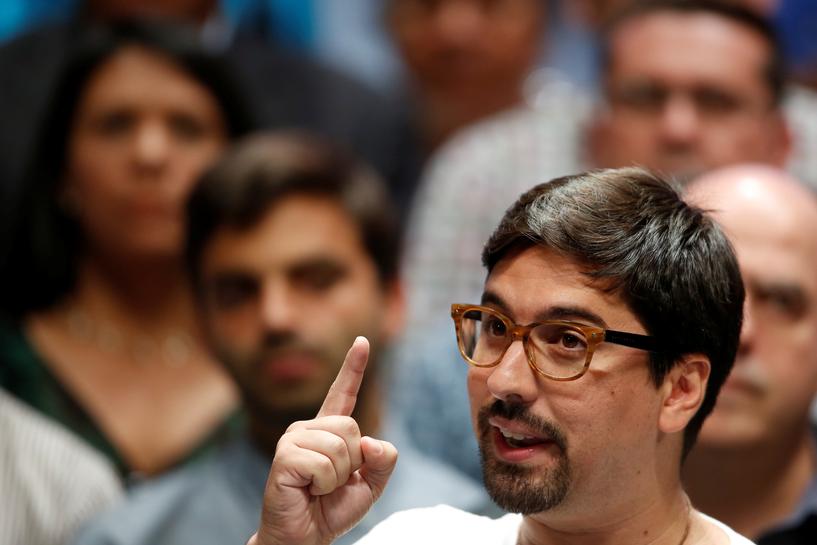 CARACAS (Reuters) – Venezuela’s opposition called on Monday for a national shutdown against President Nicolas Maduro in a major escalation of protests against a leftist government it accuses of flouting the people’s will.

“We are not going to allow the destruction of Venezuela. The whole country overwhelmingly rejects the Maduro regime,” said opposition leader Freddy Guevara, announcing the first 24-hour strike in nearly four months of anti-government demonstrations that have led to some 100 deaths.

The opposition – which wants restaurants, shops and transport to come to a standstill on Thursday – said it would also take steps to set up a “national unity” government and name new alternative judges to the pro-Maduro Supreme Court.

That raised the possibility of a parallel state structure to challenge government-controlled institutions.

The opposition said it brought 7.6 million people out on Sunday for an unofficial vote intended to de-legitimize a man they call a dictator.

Maduro’s foes are demanding a presidential election and want to stop his plan to create a controversial new legislative super-body called a Constituent Assembly in a July 30 vote.

They are also seeking freedom for about 400 jailed activists, independence for the opposition-controlled legislature, and permission for foreign humanitarian aid to Venezuelans suffering shortages and hunger.

Guevara said the opposition would only talk with the government if the constituent plan was withdrawn. The hardball strategy recalls events before a short-lived coup against Maduro’s predecessor and mentor Hugo Chavez in 2002.

(For a graphic on Venezuela’s dark days, click tmsnrt.rs/2qsTmHg)

Venezuela’s leading business group Fedecamaras, which played a major role against Chavez in 2002, said it would be up to each company and its workers to decide whether to heed opposition actions.

On Sunday, opposition supporters voted overwhelmingly – by 98 percent – to reject the proposed new assembly, urge the military to defend the existing constitution, and support elections before Maduro’s term ends.

The 7.6 million people who participated in Sunday’s event was just under 7.7 million opposition votes in the 2015 legislative elections, that it won by a landslide.

The turnout followed just two weeks of organization, with voting at 2,000 polling stations, seven times fewer than those used in the official 2015 vote.

“The result is a remarkable show of force for Venezuela’s opposition,” New York-based Torino Capital said.

Freddy Guevara, first Vice-President of the National Assembly and lawmaker of the Venezuelan coalition of opposition parties (MUD), talks to the media during a news conference in Caracas, Venezuela July 17, 2017.Carlos Garcia Rawlins

“The results seem to confirm that the opposition would easily defeat the government in any election.”

Maduro, 54, a former bus driver and long-serving foreign minister for Chavez, narrowly won election in 2013 and his ratings have plunged to just over 20 percent during a brutal economic crisis in the South American OPEC member.

Maduro insists opposition leaders are U.S. pawns intent on sabotaging the economy and bringing him down through violence as part of an international right-wing conspiracy led by Washington and fanned by private domestic and foreign media.

Most Venezuelans oppose the government’s Constituent Assembly, which will have power to rewrite the constitution and annul the current opposition-led legislature, but Maduro is pressing on regardless for the vote in two weeks’ time.

“The ruling Socialist Party cannot win a free and fair election of any kind, and the Constituent Assembly is designed to resolve their collective electability problem by tilting the electoral playing field,” Eurasia consultancy said.

“And even if it is generating discomfort internally, including among the security apparatus, most groups within the ruling coalition seem willing to see if Maduro can in fact get away with it, given the fact that exit costs remain very high.”

Maduro, whose term is due to end in early 2019, dismissed Sunday’s event as an internal exercise by the opposition with no bearing on Venezuela. He says the Constituent Assembly is the only way to bring peace to the nation of 30 million people.

Foreign Minister Samuel Moncada said some media passed off photos of government supporters participating in the practice for July 30 as if they were opposition sympathizers at Sunday’s referendum.

The total vote would be impossible to check, he said, as opposition organizers were going to burn ballots. The coalition has said it will do that in coming days to keep the vote secret and prevent reprisals by officials.

“The media have a permanent pact with the opposition,” Moncada said.

This year’s political turmoil has taken a heavy toll on Venezuela: 95 deaths in unrest since April, thousands of injuries, hundreds of arrests, and further damage to an economy in its fourth year of precipitous decline.

The latest fatality came on Sunday when gunmen shot a 61-year-old woman in a crowd of opposition voters in the poor Caracas neighborhood of Catia. Hundreds of people were besieged in a church for hours during the melee, a witness said.

The U.S. government condemned violence by “government thugs”, and called for the July 30 vote to be canceled, with “free and fair” elections scheduled instead.