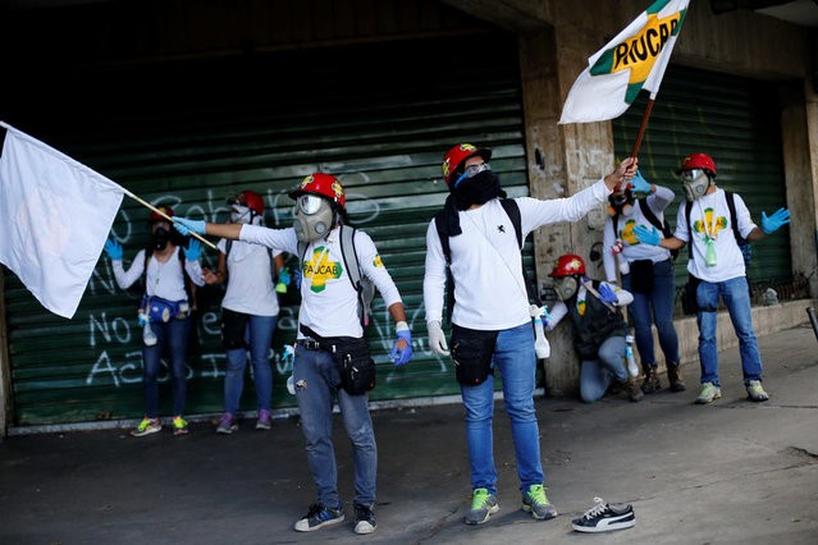 CARACAS (Reuters) – A violinist who has become one of the best-known faces of protests against Venezuelan President Nicolas Maduro was injured on Saturday in violent clashes in Caracas.

The Democratic Unity coalition had called a march on the pro-Maduro Supreme Court in support of alternative magistrates appointed by the opposition on Friday. But security forces blocked their way with armored cars and riot shields.

Various people were injured, including musician Wuilly Arteaga. The 23-year-old has become famous in Venezuela for playing of the national anthem and other tunes on his violin in front of security lines as battles rage around him.

Paramedics attended Arteaga in the street as blood poured down his face. He later tweeted a video from hospital with a bandaged face and clutching his violin.

“Neither rubber bullets nor pellets will stop our fight for Venezuela’s independence,” said Arteaga. “Tomorrow I will be back in the streets.”

The opposition coalition and a self-styled, youth-led “Resistance” movement in early April launched protests against Maduro whom they accuse of turning the country into a dictatorship and wrecking what should be a prosperous economy.

Maduro calls demonstrators “terrorists” seeking a coup with the support of the United States and the international media.

Some 100 people have died in the unrest since April, including five during a national strike on Thursday.

Thousands more have also been injured and hundreds arrested.

Venezuela’s political crisis has entered a dangerous new stage as the opposition escalates street tactics to try and block a controversial new super-congress Maduro wants to set up with an election next weekend.

The opposition is boycotting that vote, calling it a sham intended to guarantee a majority for the unpopular Maduro. Critics are instead demanding conventional elections to try and end nearly two decades of Socialist Party rule.

Foes of Maduro are threatening to shut down Venezuela with protests to block the July 30 vote for the Constituent Assembly, which could re-write the constitution and disband the existing opposition-led legislature.

At pro-government rallies on Saturday, candidates for the Constituent Assembly said it was the only way to bring peace to Venezuela.

“We are not going to let them destroy our fatherland,” said Delcy Rodriguez, who left her post as foreign minister to stand for the new congress.

“All of us united are going to tell the right wing ‘We’ve had enough of terrorism,'” Maduro’s wife Cilia Flores, also running for an assembly post, told the same rally in Caracas.

Opposition protesters plan to march again on Monday, and Machado said there would also be a general strike at some point next week. International pressure has been ratcheted up on Maduro to abort the vote, including a threat from U.S. President Donald Trump to apply economic sanctions.

But the government is showing no sign of backing down, announcing that it will put 232,000 soldiers on the streets to ensure the Constituent Assembly goes ahead in a week’s time.

“The repression has been brutal and the world has to understand what we are living through in the streets of Venezuela,” Machado said. “It’s criminal.”