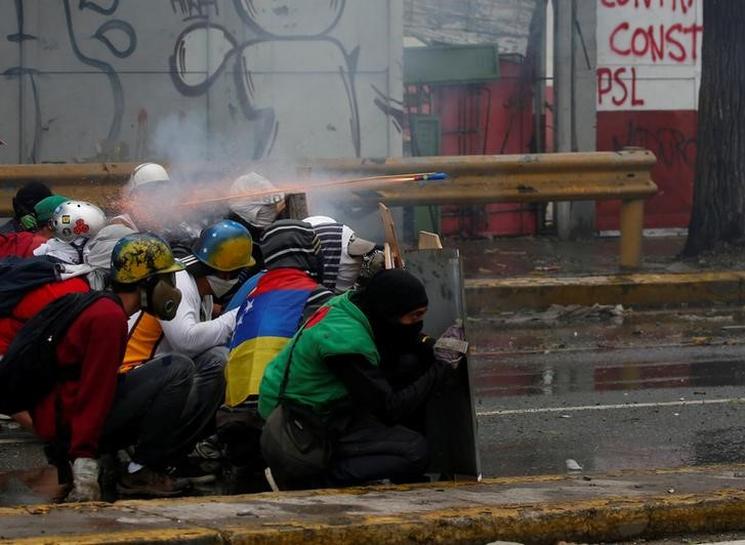 CARACAS (Reuters) – Venezuelan protesters blocked streets on Saturday in a last-ditch effort to derail the election of a legislative super-body that opponents of President Nicolas Maduro say will give the socialist leader a stranglehold on power.

The oil-rich but recession-racked country has been gripped by four months of protests against Maduro that have left more than 110 dead in confrontations against security forces who have responded with tear gas, rubber bullets and water cannons.

“Extend the barricades until tomorrow and everybody go to the streets on Sunday to demand the transformation of Venezuela,” Freddy Guevara, an opposition congressman, said on Twitter.

Caraqueños, as residents of capital city Caracas are known, woke to the sight of debris-strewn streets where demonstrators clashed with security forces during the week. Those who are against Maduro’s brand of socialism said they would not vote in Sunday’s election aimed at selecting the “constituent assembly.”

“I’m not going to vote tomorrow. I’m going to stay home, watch TV series and then come out to join the protests, of course,” Margarita Lopez, a physician’s assistant in Caracas, told Reuters as she stood by one of the barricades.

“It might not do any good, but our voices have to be heard.”

Customers look for products in a supermarket after a strike called to protest against Venezuelan President Nicolas Maduro’s government in Caracas, Venezuela, July 29, 2017.Andres Martinez Casares

The government has banned protests from Friday to Tuesday, but opposition figure Henrique Capriles called on his followers to hold protests along the country’s main roads on Sunday.

People with enough money to buy food in the face of the world’s highest inflation rate also stocked up on basics like bread, chicken and milk as a precaution in the event that unrest forces stores and other businesses to close in the coming days.

“People are desperately buying groceries while they can because who knows if we’ll be able to keep buying on Monday,” Nestor Escalante, a 50-year-old graphic designer, told Reuters outside the Always Fresh grocery store in Caracas.

“I’m using savings to make sure I have food in the house.”

Of the 6,120 candidates in Sunday’s election for a 545-member constituent assembly, none are from Venezuela’s opposition, which is boycotting what it calls a rigged ballot meant to consummate a dictatorship.

Critics say Maduro is less interested in rewriting the constitution, which already provides generous powers to the executive branch, than he is in obtaining the near-absolute powers that the new legislative body would have.

The absence of the opposition’s participation means the pool of aspirants for the all-powerful assembly is a mixture of well-known ruling Socialist Party leaders and rank-and-file pro-government activists.