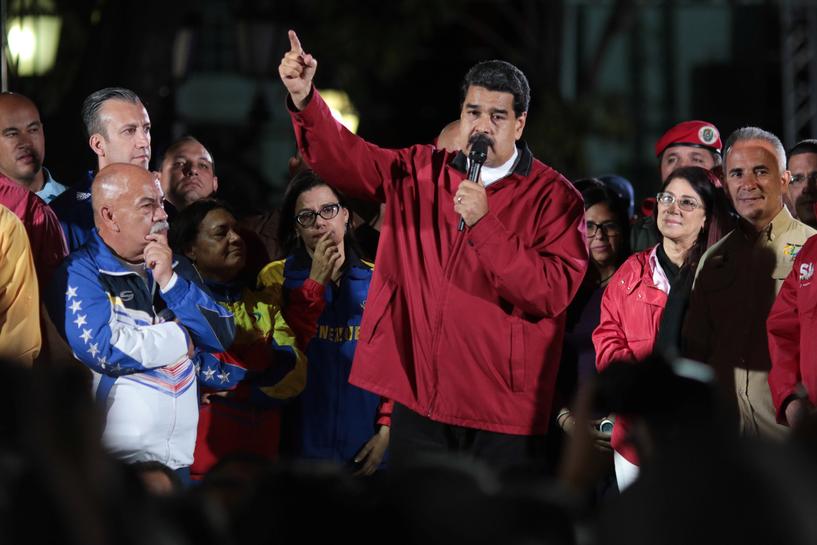 CARACAS (Reuters) – Anti-government demonstrators barricaded streets on Monday and promised a fresh wave of protests against President Nicolas Maduro, after an election a day earlier giving the Venezuelan leader and his ruling Socialist Party sweeping powers.

At least 10 people were killed on Sunday in protests against the unpopular Maduro, who insists the country’s newly elected constituent assembly will bring peace after four months of protests that have killed more than 120 people.

Opposition parties sat out the election, saying it was rigged as part of a naked power grab by Maduro, leaving all 545 of the assembly’s seats for the socialists and their allies.

Protesters set up barricades along main avenues of Caracas as they denounced the advent of dictatorship.

Construction worker Leonardo Valbuena, 35, leaning on a rusting barrel next to a cable was stretched across a usually busy street, said he was protesting because the economic crisis had left him unable to find work.

“I’ve got four kids – four! How am I supposed to feed them?” said Valbuena, adding that the official figure of 8 million voters in Sunday’s election was inflated. The opposition put the figure at around 2.5 million.

“Now that they’ve got their assembly they’re going to come for us. But we’ll die fighting them.”

Countries across the Americas, as well as the European Union, denounced the creation of the assembly, which will have the power to rewrite the constitution.

The United States – the top market for the OPEC nation’s oil – called the vote a sham, and officials in Washington said they were preparing oil-sector sanctions.

Chief Prosecutor Luisa Ortega, who has been harshly critical of Maduro this year, said the creation of the constituent assembly was putting “absolute power” in the hands of the Socialist Party leadership.

“We are in the presence of dictatorial ambitions,” Ortega told a news conference.

Government officials have for weeks suggested that she will be removed by the new assembly, which will have the power to dissolve state institutions such as the opposition-run Congress and dismiss state officials.

Maduro on Monday night called for a “restructuring” of the chief prosecutor’s office.

“Nobody recognizes that (constituent) assembly, it’s the epitome of nothing,” said legislator Juan Requesens in an internet broadcast as he entered Congress for a meeting with opposition deputies.

Socialist Party No. 2 Diosdado Cabello on Sunday hinted that the constituent assembly would meet in the same legislative palace. The socialists had controlled Congress until the opposition’s landslide victory in 2015.

“They kick us out the door we come back through the window,” he told a news conference.

Requesens, however, warned of a struggle if government forces wanted to seize the premises of the legislature.

“If they want to take over Congress with their armored vehicles, with their paramilitary groups, then what’s waiting for them here is a fight,” he said, referring to armed pro-government gangs who recently burst into Congress and beat legislators with lead pipes, leaving several of them bloodied and injured.

Latin American nations from Argentina to Mexico, which are historically wary of siding with Washington in hemispheric disputes, sharply condemned the vote, leaving Venezuela on track to become a pariah state.

The EU said the constituent assembly could not be part of the negotiated solution to the country’s crisis, noting it was elected under doubtful and often violent circumstances..

The opposition organized an unofficial referendum over Maduro’s plan earlier in July, when more than 7 million voters overwhelmingly rejected his constituent assembly and voted in favor of early presidential elections.