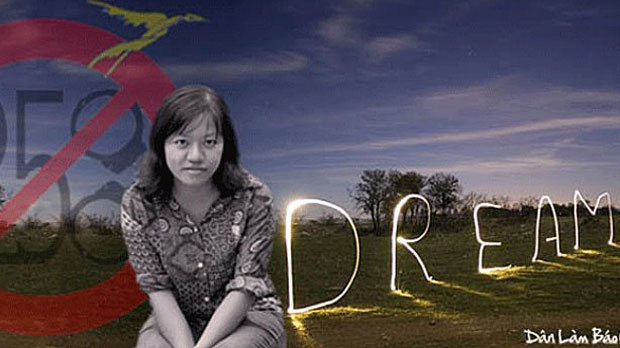 Trang, who has vowed to remain in Vietnam until the country becomes a democracy, was awarded RSF’s Prize for Impact in absentia for her work which “has led to concrete improvements in journalistic freedom, independence and pluralism, or to an increase in awareness of these matters.”

In a video Trang recorded that was played during the award ceremony in Berlin, Germany, on Thursday, the author of Politics for Everyone said that while Vietnam’s Constitution contains language which, among other things, guarantees the protection of human rights such as freedom of speech, “it doesn’t mean anything.”

“We have all the human rights guaranteed by the Constitution, but you know, in fact, ‘all animals are equal, but some animals are more equal than the others,’” Trang said, referencing George Orwell’s political satire Animal Farm.

“The more-equal-than-others ‘animals’ like to see us [journalists] as losers, as their hostile forces, as their state enemy, enemy of the people, and fake news producers,” she said, adding that “they do everything they can to harm us, to destroy us.”

“But it doesn’t matter much to us because we have what they don’t have. We have a passion for truth, we have a commitment to change, and we have hope … [that Vietnam will] soon turn into a democracy … where journalists like me, like us, can travel everywhere and not [have] to hide from the police, but can listen to unheard voices and tell untold stories, to bring information and knowledge to the people.”

Trang, who also founded the online legal magazine Luat Khoa and edits another web-based rights journal called thevietnamese, noted that Vietnam is home to nearly 1,000 official media outlets, but said the country has “only one editor-in-chief—the head of the propaganda department of the [ruling] Communist Party.”

And while some 20,000 journalists have been granted press cards or have been licensed to report, she said that “thousands of people have been imprisoned over the past two decades just because they spoke their mind.”

Trang thanked RSF for the recognition and said she also received her award on behalf of others “fighting for the truth” around the world.

“We will fight until journalism is no longer seen as a crime anywhere in the world,” she said.

Huu Long Trinh, a Vietnamese journalist based in Taipei, Taiwan, who co-founded the civil society organization Legal Initiatives for Vietnam (LIV), accepted RSF’s Prize For Courage on Trang’s behalf, noting that the blogger is “struggling with severe injuries in her arms and legs” after she was beaten by police because of her work in August 2018.

A colleague told RFA’s Vietnamese Service at the time that Trang was among at least four activists who were attacked after policemen stormed into a cafe and broke up dissident singer Nguyen Tin’s “Memory of Saigon” show. She was then taken by police to an unknown road outside the city and “beaten further to the point of disfiguring her face.”

The New York-based watchdog group Human Rights Watch said that during the Aug. 15 attacks, Trang suffered multiple bruises, nausea, and dizziness and was later diagnosed with a concussion. Friends who tried to visit her in the hospital were harassed and beaten, the rights group said.

In an interview with RFA last month, after learning she had been shortlisted for RSF’s award, Trang said that international awards in the fields of human rights, freedom of the press and freedom of speech encourage activists to pursue their work, despite the odds they face.

“In Vietnam, writers are vigorously repressed, so such international prizes help them feel that what they have done—while repressed inside the country—is known to the outside world and supported, which means they are not alone,” she said.

The rights group Amnesty International estimates that at least 128 prisoners of conscience are currently held in Vietnam’s prisons, where many are subjected to torture or other ill-treatment.