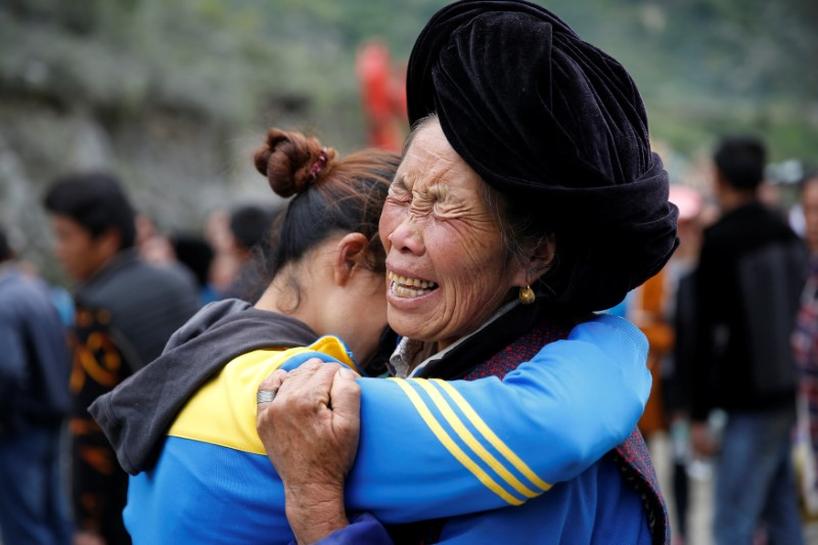 XINMO, China Villagers in China visited what used to be their relatives’ homes on Monday to mourn loved ones lost when a landslide swept down a mountain, with little hope of finding anyone alive after more than 48 hours of fruitless searching.

At least 93 people are missing after the landslide engulfed Xinmo village in mountainous Sichuan province as dawn broke on Saturday. Ten people have been confirmed dead.

“Our house was somewhere around here but everything has been destroyed beyond recognition,” said a middle aged woman, one of a few residents who were away when disaster struck, after she pulled a green blanket she recognised out of the mud and rocks.

The government has sent some 3,000 rescuers, along with heavy digging equipment, and has promised to do all it can to look for survivors.

Some villagers said they’ve always known landslides are a big danger but authorities never offered to help them move.

With danger of more landslides, authorities have been restricting access to the disaster zone, but hundreds of people were allowed back on Monday.

Mournful wails and firecracker explosions echoed through Xinmo’s steep valley as bereaved relatives returned, many clutching snacks and wrapped in plastic and bottles of wine as offerings for the dead.

Some people burned paper money and lit incense which, along with setting off fireworks, are traditional acts of mourning.

“Every single family has been impacted by the landslide, it’s horrible,” said Sun Danxian, from a neighbouring village who was walking through the site.

The government of Mao county, where the village is located, posted on Monday drone video footage of the area showing about dozen mechanical diggers shifting through a landscape of grey rocks.

Earlier on Monday, about 100 villagers, unhappy with what they said was limited information, met government officials at a nearby primary school, insisting they had to get to Xinmo.

They also voiced fears about the possibility of rebuilding homes before winter and what would happened to orphans.

“These government officials have been lying to us for three days,” a middle aged man from Xinmo, with several missing relatives told Reuters. He declined to give his name.

“They told us we could go back yesterday morning but they kept delaying and delaying giving us all kinds of excuses. They told us a central government official was going to come to visit us. He showed up and didn’t even bother to speak to us.”

Another relative said the government should have moved them out of an area they knew was prone to landslides.

“There have been landslides before but no one has ever suggested we move. The government knows it’s dangerous to live in these kinds of villages and yet they do nothing,” said the elderly man, who also would not provide his name.

The official China Daily cited Xu Qiang, a disaster expert at the Ministry of Land and Resources, as saying large-scale relocations in the area were difficult.

“Many of the villagers have been living here for generations and have seen no major geological disasters,” Xu said. “This is their home and livelihood and it is very difficult to convince them to leave, specially when you only have a hypothesis and predictions.”

Sichuan province is also prone to earthquakes, including an 8.0 magnitude tremor in central Sichuan’s Wenchuan county in 2008 that killed nearly 70,000 people.

Mao county is next to Wenchuan. State media said the mountainside that collapsed onto the village had been weakened by the 2008 earthquake.

Most residents of the area are poor farmers of the Qiang ethnic minority and the area is the target of a poverty alleviation project, according to government officials.