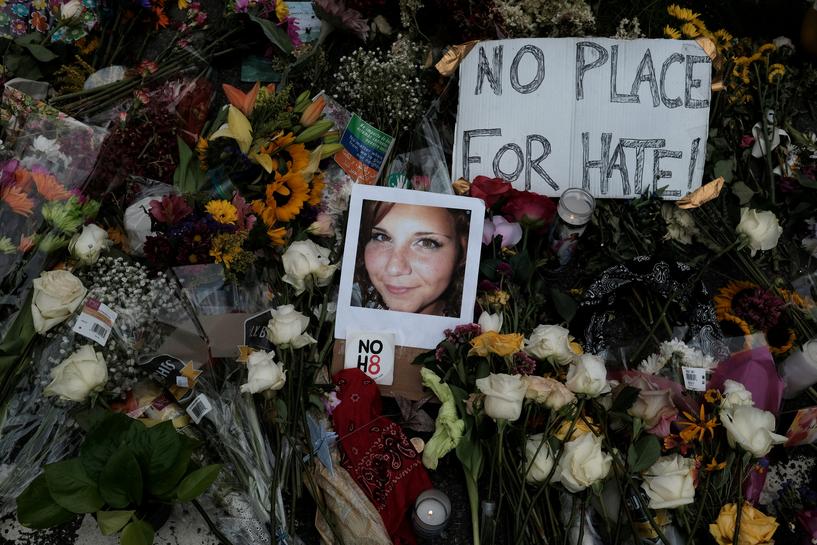 CHARLOTTESVILLE, Va. (Reuters) – A 32-year-old woman killed when a suspected white nationalist crashed his car into anti-racist demonstrators in Charlottesville was being remembered on Wednesday at a memorial service in this southern U.S. college town.

Heather Heyer was killed after hours of clashes on Saturday between white nationalists attending a “Unite the Right” gathering and counter-protesters.

Fall-out from the incident has become the biggest domestic challenge faced yet by President Donald Trump, who was assailed from across the political spectrum over his initial response blaming “many sides” for the unrest.

On Monday, the Republican president bowed to political pressure and denounced neo-Nazis and the Ku Klux Klan by name, but on Tuesday he inflamed tensions again by insisting that counter-protesters were also to blame.

Mourners began to file in to Charlottesville’s 1930s era Paramount Theater, located near the spot where she died, shortly after 10 a.m. ET (1400 GMT). A slideshow of photographs of Heyer played on a large screen at the front.

Many of those attending wore purple, Heyer’s favorite color, at the request of her parents, Susan Diane Bro and Mark Heyer.

Alvin Edwards, pastor of the city’s Mt. Zion First African Baptist Church, was due to address the memorial.At a community meeting on Monday night, he had called on residents to continue to work to make Charlottesville a less appealing place for white supremacists to protest.

“One of the things I want to make sure we do as a community and as a city is that we have to stand up and show the strength that we have in our community,” Edwards said, adding that he was stunned to be facing Ku Klux Klan sympathizers more than a half-century after the height of the civil rights movement.

Residents of the usually quiet, liberal-leaning Virginia city were horrified by the weekend violence they said was brought by outsiders.

Amid concerns trouble could erupt outside Wednesday’s memorial, a small group of anti-racist protesters wearing pink helmets and carrying baseball bats and purple shields stood quietly near the theater.

One of the group, who declined to be named, said they brought weapons for self defense and were worried that the white supremacists who came on Saturday would return.

“The right to self defense is an inalienable right,” the group member said. “The cops didn’t protect us on Saturday and we don’t trust them to do so today.”

Also outside the theater, artist Sam Welty was chalking a large portrait of Heyer on a memorial wall where many tributes to the slain woman have been written.

“The way she lost her life, doing what she did, really stood for Charlottesville. It makes me wish that I knew her,” said Welty, 42. “It’s a shame that people who don’t live here had to come and unleash hate and violence and put Charlottesville on the world map for something that it does not deserve.”

James Fields, a 20-year-old Ohio man said to have harbored Nazi sympathies, has been charged with Heyer’s murder, as well as with malicious wounding and fleeing the scene. Nineteen other people were injured in the incident.

On her way to work at a Charlottesville insurance office, Stephanie Sherwood, 28, said she had always lived in the city, and had never seen anything like Saturday’s events. She said Trump’s remarks on Tuesday made her very angry.

“He went off the rails yesterday, but I think he really showed who he is as a person,” Sherwood said.