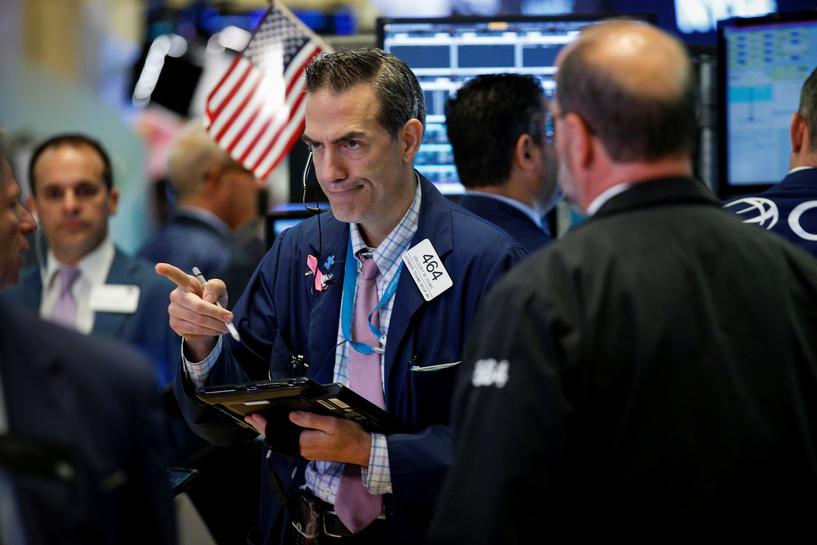 NEW YORK (Reuters) – U.S. stocks remained lower on Wednesday as investors mulled President Donald Trump’s threat to shut down the government if funds are not secured to build a Mexico border wall.

Stocks did briefly pare losses after comments from U.S. House Speaker Paul Ryan that a government shutdown was unnecessary. Yet that was not enough to calm nerves as the deadline to raise the U.S. debt ceiling draws near.

Wall Street analysts estimate Congress has just 12 working days when it returns from its summer recess on Sept. 5 to raise the debt ceiling before the U.S. Treasury exhausts the last of its options to remain current on all of the federal government’s obligations.

Credit ratings agency Fitch Ratings said a failure to raise the ceiling in a timely manner would prompt it to review its rating on U.S. sovereign debt, “with potentially negative implications.”

“What we’ve seen over this last week or so in financial markets has been a bit of wiggling around regarding the U.S. political situation,” said Paul Eitelman, multi-asset investment strategist at Russell Investments in Seattle.

“Ultimately, I don’t think markets care that much about the noise coming out of Washington, D.C. but they’re trying to translate what that noise means for the potential for tax reform.”

Investors have grown increasingly concerned about Trump’s ability to legislate his pro-growth agenda given the near-constant political turbulence in the White House.

The CBOE Volatility index .VIX, a widely followed measure of market anxiety, increased 4.9 points to 11.91, on track to rise for the first time in four days.

Investors are also jittery ahead of a speech by Federal Reserve Chair Janet Yellen to a meeting of central bankers in Jackson Hole, Wyoming, on Friday, which will be scrutinized for clues on the U.S. central bank’s stand on monetary policy.

Also weighing on sentiment was data showing that sales of new U.S. single-family homes unexpectedly fell in July to a seven-month low.

Consumer discretionary .SPLRCD names fell 0.8 percent, dragged lower by a 4.96 percent decline in Lowe’s Companies (LOW.N). The home improvement retailer was on course for its worst day in a month after disappointing results and forecast.

Advancing issues outnumbered declining ones on the NYSE by a 1.21-to-1 ratio; on Nasdaq, a 1.09-to-1 ratio favored decliners.