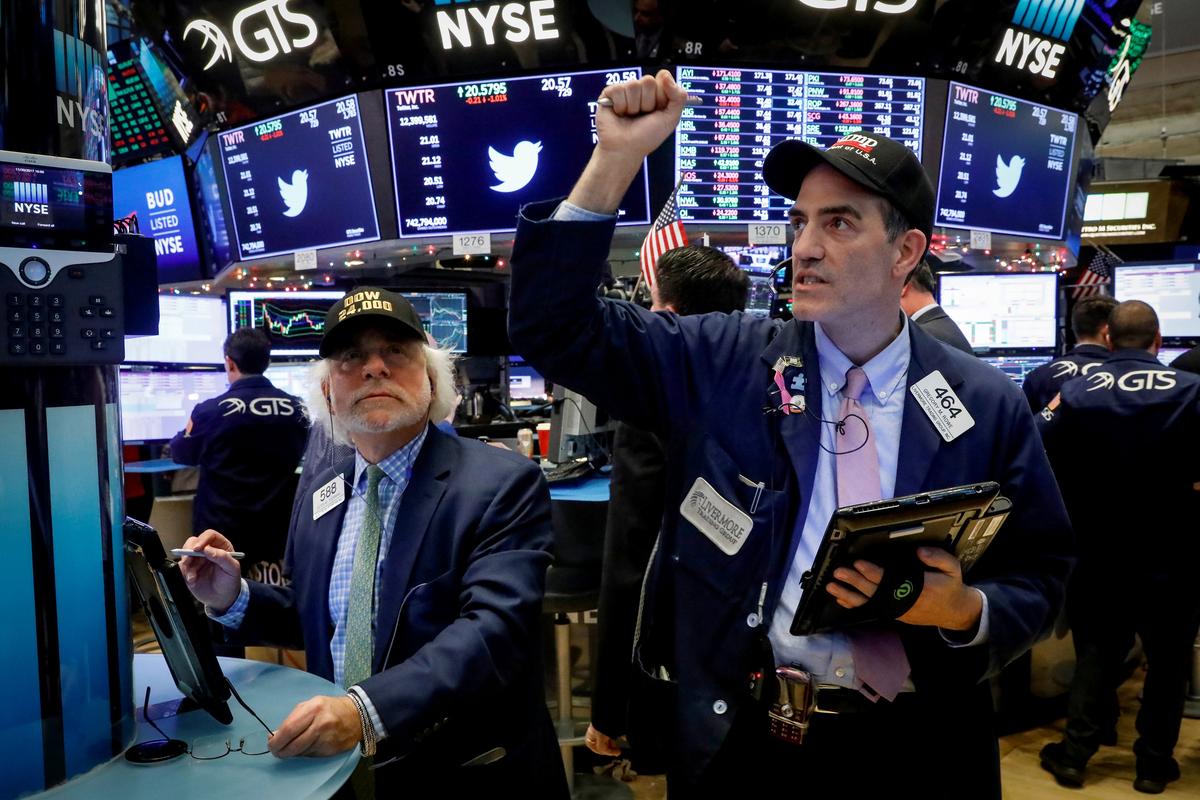 (Reuters) – U.S. stocks are expected to keep rising in 2018 because a massive drop in the corporate tax rate is seen boosting the economy and corporate profits, but strategists say sizable gains could either be short-lived or elusive.

The bull market is on track to mark its ninth birthday in March, with the S&P 500 climbing 20 percent for 2017 – its biggest increase since 2013. The drop in the corporate tax rate in 2018, to 21 percent from 35 percent, is seen by many as the biggest factor for the stock market next year.

Yet 2018 share gains are expected to be smaller than 2017 with the S&P 500’s price/earnings ratio – a measure of stock prices against expected profits – is around its highest level since June 2002. Many on Wall Street cite potential pitfalls even though they see no signs of a recession.

“We’ve had six years in a row where stocks have (outperformed) earnings, and I think we break that streak with stocks going up but not as much as earnings,” said Robert Doll, chief equity strategist at Nuveen Asset Management in Princeton, New Jersey.

Some say the tax bill’s benefit will be short lived. David Kelly, chief global strategist at J.P. Morgan Asset Management described the bill as “more carbs and less protein,” because the tax overhaul will improve spending but does nothing to boost productivity.

“It’ll be a one-year wonder,” said Kelly. “People should enjoy the party while it lasts but just make sure you know where your coat is.”

Several strategists cite the risk that faster economic growth could cause inflation to increase at a pace that would lead the U.S. Federal Reserve to raise interest rates faster than expected.

Wall Street’s rosy forecasts seem “well supported by the tremendous string of good news which the economy has delivered,” according to Jim Paulsen, chief investment strategist with Leuthold Group in Minneapolis.

But he said, the news is too good: “The problem with getting good news is that at some point you can’t be positively surprised any more.”

Paulsen does not expect a recession. But when the economic surprise index – which compares economic data to consensus expectations – is at high levels, equity performance tends to be weaker, according to Paulsen.

The Citi Economic Surprise index .CESIUSD was at 77 on Thursday, not far from its almost six-year high of 84.5 reached on Dec. 22.

“We’re going to have a 10-15 percent correction at some time in 2018. I wouldn’t be surprised if we’re down for the year,” Paulsen said. “If we get a correction and people get scared I’ll probably be buying again.”

Investors will keep a close watch on the on U.S. mid-term elections in 2018 because a Republican loss of control of the Senate or the House of Representatives could stall the party’s agenda. In 10 of the last 17 U.S. mid-term election years, equity price moves for the full year followed January’s direction, according to Jeff Hirsch, editor of the Stock Trader’s Almanac.

Investor moods in January may depend on whether the U.S. Congress reaches an agreement to raise the country’s debt ceiling. Investors will also be hoping Congress can reach a 2018 budget pact by Jan. 19. These are just some of the worries traders are contending with.

But the market has history against it. The S&P 500 rises on average 1.3 percent in the so-called Santa Clause rally – the period between Dec. 22 and Jan. 3 – according to Hirsch. This year, five days in, the S&P has risen just 0.1 percent.

“The failure of stocks to rally during this time tends to precede bear markets or times when stocks could be purchased at lower prices later in the year,” Hirsch wrote in a blog post.