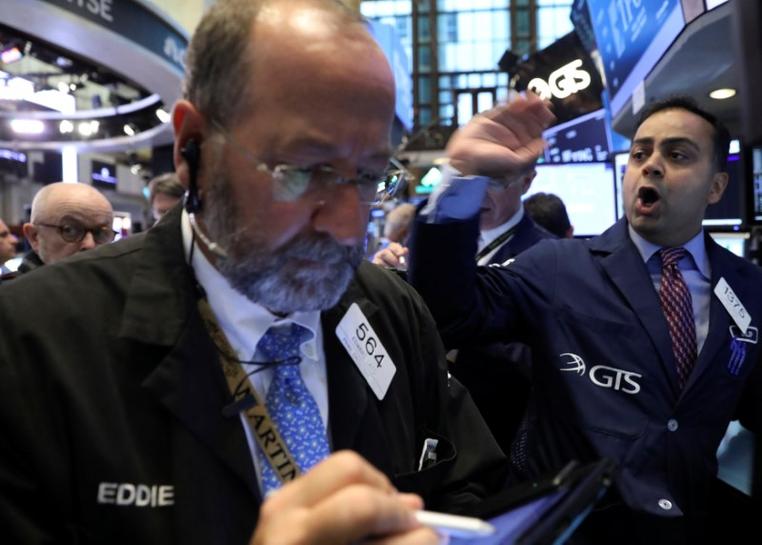 The three major indexes hit record highs earlier in the day, powered by a barrage of strong quarterly earnings, led by Facebook and Verizon.

Facebook (FB.O) jumped as much as 5.96 percent to a record high after the social network’s results topped Wall Street estimates.

Verizon (VZ.N) surged 7.27 percent to a three-month high after the company reported quarterly subscriber additions that topped estimates. The stock put the S&P telecommunications index on track to post its biggest one-day percentage gain in more than eight years.

Still, the S&P technology sector .SPLRCT remains the best performing sector as investors look for growth in an otherwise low-growth environment. The index was down 0.88 percent.

Online giant Amazon (AMZN.O) is due to report results after the bell, along with Intel (INTC.O).

“Technology stocks are beating estimates by a large margin and most tech companies are growing at a core, organic rate without the economy growing too much,” said Aaron Clark, portfolio manager at GW&K Investment Management.

Earnings of S&P 500 companies are now expected to have climbed 10.7 percent in the second quarter, up from an 8 percent rise estimated at the start of the month, according to Thomson Reuters I/B/E/S.

With equity markets at record levels, investors have been counting on strong earnings to justify the relatively expensive stock valuations.

“While multiples are not cheap and are expected to grow further, strong earnings are justifying these levels,” said Clark.

Five of the 11 major S&P sectors were higher, with the telecommunication index’s .SPLRCL 4.50 percent rise leading the advancers.

However, losses in Amgen (AMGN.O), Johnson and Johnson (JNJ.N) and Celgene (CELG.O) led to a 0.32 percent drop in the healthcare sector .SPXHC.

Twitter (TWTR.N) fell as much as 14.07 percent, putting it on track for it’s biggest one-day fall since October, after the company’s quarterly results showed it failed to add users on a monthly basis in the second quarter, compared with the first quarter.