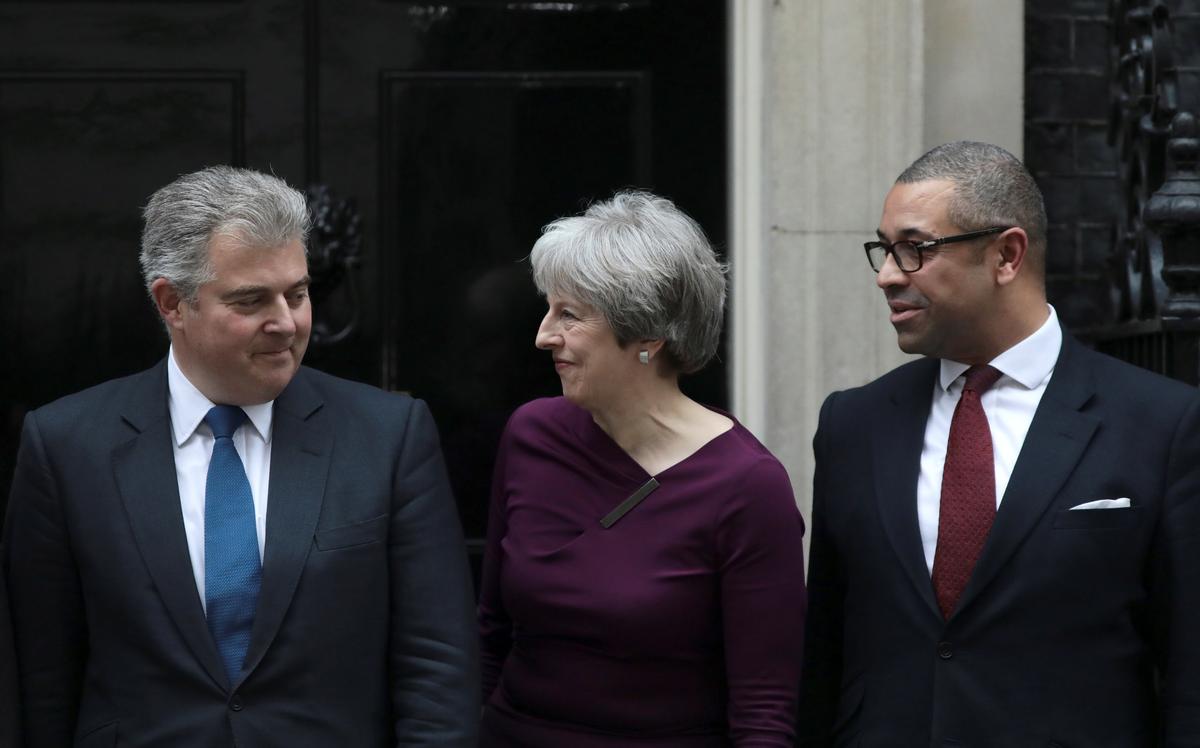 LONDON (Reuters) – British Prime Minister Theresa May named an ally to run the ruling Conservatives and promoted younger ministers on Monday to try to give her divided party and government a new start after a year marred by an ill-judged election, rows over Brexit and scandals.

May, weakened by the loss of the Conservative Party’s majority in June’s election gamble, hoped to reset her agenda and further Britain’s departure from the European Union after winning a deal to move to a second phase of Brexit negotiations.

But by keeping her team’s ‘big beasts’ – the finance, Brexit, foreign and interior ministers, some opposition lawmakers questioned her ability to fully reassert her authority with the reshuffle after the setbacks last year.

After a difficult start when her party had to delete a tweet naming the wrong person as its new chairman, May went on to promote more women, black and younger lawmakers to challenge critics who call the Conservatives “male, pale and stale”.

“It’s an opportunity to refresh the government and just to give added impetus to the prime minister’s reform agenda while continuing to deliver on Brexit,” her spokesman said.

Despite winning agreement from the EU to move Brexit talks to a discussion of future trade and a transitional deal, May has been criticised at home for her approach to healthcare, housing, transport and Britain’s departure from the bloc.

Her Conservative Party is also reported to be losing members at a time when the main opposition Labour Party, under leftist leader Jeremy Corbyn, is enjoying record levels of support, suggesting to some that it is on course to win a new election due in 2022.

To combat this, May appointed two popular Conservatives to become the chairman and deputy chair of the party – immigration minister Brandon Lewis and lawmaker James Cleverly.

“I look forward to working with our dedicated membership, volunteers across the country and the excellent team in CCHQ (Conservative Campaign Headquarters) as we look ahead to elections this year and beyond,” the 46-year-old Lewis, a supporter of May’s leadership bid in 2016, said in a statement.

His move was welcomed by many in the party, who had criticised former chairman Patrick McLoughlin for failing to broaden the party’s appeal and to prepare for the June election.

“(Lewis is) the type who might have the guts and inclination to take on the party internally and to be a loud media voice to take away the heat from Theresa May,” a Conservative member said. “He’s not usually scared of a fight.”

David Lidington was appointed as minister for the cabinet office, replacing May’s closest friend in parliament, Damian Green, who was forced to resign last year over misleading statements over pornography found on his computer.

But in a blow to her, the minister for Northern Ireland, James Brokenshire, stepped down because of ill-health. He had been trying to help officials form a power-sharing government to avoid any return to violence between pro-British unionists and Irish nationalists that scarred the province for decades.

He will be replaced a May loyalist, Karen Bradley.

The Liberal Democrats’ Alistair Carmichael said the reshuffle could be summed up as “nothing has changed”, repeating words used by May at one of the lowest points in her election campaign when she was forced to change policy over social care.

“Theresa May wanted to reassert her authority but has come out of this looking weaker than ever,” he said in a statement.