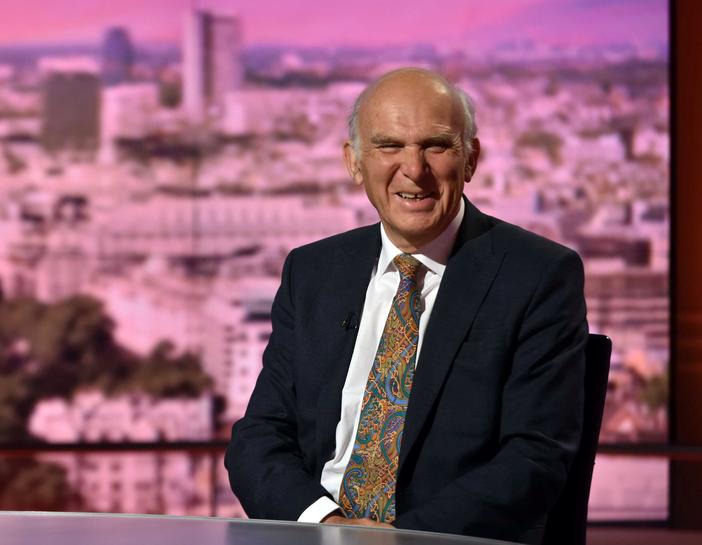 LONDON (Reuters) – Britain is heading towards a new economic crisis which could raise popular support for anti-Brexit parties, the former business minister and likely next leader of the pro-EU Liberal Democrats said on Tuesday.

Vince Cable, currently the only candidate in a contest to lead the Liberal Democrats, said that historically low interest rates had left the British economy too reliant on cheap money and many people would be hit by rising rates.

Britain’s two main parties – the governing Conservatives and main opposition Labour Party – have thrown their support behind the 2016 referendum vote to exit the European Union, promising to negotiate a good deal with Brussels. The Liberal Democrats have instead argued that Britain may yet change its mind.

“There is something here which is not sustainable and it is going to hit us very hard,” Cable, who holds a doctorate in economics, told reporters at a lunch in parliament.

He said an economic shock would spread doubt about whether the Brexit vote, which Prime Minister Theresa May has taken to mean a withdrawal from all key EU structures including its single market and customs union, was a sensible decision.

“We are getting into an environment where economics comes back to centre stage…People didn’t vote to be poorer and when they find that that’s the environment in which they are in, I think the whole political chemistry around this subject will radically change,” he said.

Cable, who last week said he thought Brexit might never transpire because the main political parties are too divided over terms for quitting the EU, said his party would be in a strong position to break through when that happens.

“We are not going to advance by small incremental steps – that is not my objective, it is actually to make a breakthrough,” he said.

“The electorate is very volatile, they have been offered two alternatives neither of which I think are convincing and plausible and I think if we get the messaging right…, we have an opportunity to break through the (political) middle.”

Cable served as business minister from 2010 to 2015 when the Liberal Democrats were the junior partners in a coalition government led by then-Prime Minister David Cameron’s Conservatives. Cameron resigned after a narrow majority rejected his “Remain” campaign in the referendum.

The Liberal Democrats’ influence has since waned and they now hold just 12 out of 650 seats in parliament. Ahead of last month’s election they campaigned to give Britons a second referendum on Brexit once the final deal has been agreed.

Cable – credited as predicting the 2008 banking crisis – said he did not think the economic impact of Brexit would be comparable to the global financial crisis as banks were stronger now.

“It’s declining. We are weak relative to other countries … The underpinnings are weak. All this boastful talk about ‘Britain has a terribly strong economy’ – I’m sorry it’s just not true. There are some fundamental weaknesses.”

Some of Hong Kong’s poor finally feel at home in 290 sq ft modules
23 new COVID-19 infections in Singapore, including 3 in the community and 4 imported cases
COVID-19: Singapore to lift border restrictions for some visitors from Australia, Vietnam
Three dead after fire at Huawei facility in southern China
Chinese Leader Xi Jinping Inscribes Himself Into Party Procedural Rules