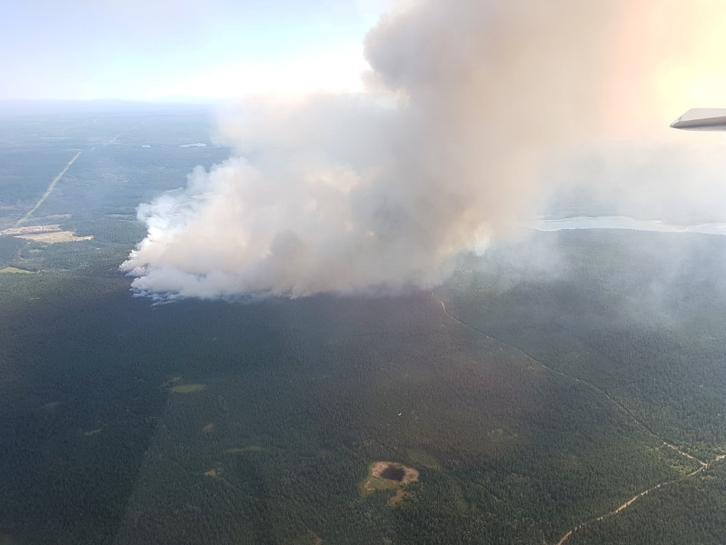 KAMLOOPS, British Columbia Some 180 wildfires raged over a massive section of Western Canada’s British Columbia on Saturday, prompting the evacuation of 3,000 households and the province’s first state of emergency in 14 years.

The blazes were scattered across hundreds of kilometers of the interior portion of the province, burning through bone-dry forests used for logging and rolling grasslands that are home to ranches. High temperatures and winds complicated firefighting efforts.

“The weather situation is not favorable,” said John Rustad, provincial minister in charge of firefighting operations. “There is very aggressive fire behavior that makes it very difficult to directly attack.”

The spate of wildfires began on Friday, when 138 new fires were reported, most of them sparked by lightning in dry electrical storms.

No injuries or deaths were reported. Provincial officials said they did not know how much damage had been caused, though evacuees said they had left behind farm animals and witnessed destruction of homes and other buildings.

Some evacuees made their way to a make-shift emergency center at a sporting facility in Kamloops, some 250 kilometers (155 miles) northeast of Vancouver.

Some people said they were not given adequate time to pack up their goods. Others, who had been away from their homes on vacation, feared they would lose cherished belongings in the fires.

Chalky red fire retardant dust was splashed on some vehicles that passed through areas that were sprayed with the substance from “water bomber” planes used to fight the fire.

Canada’s federal government on Saturday offered to help British Columbia respond to the fast-spreading wildfires, though provincial authorities said they may have enough resources already.

Rustad said that he expected about 260 personnel from other jurisdictions in Canada to support a team of more than 1,600 people helping respond to the fire.

“We are bringing a tremendous amount of resources to bear,” he said, noting that their main priority was “to keep people safe.”

British Columbia last declared a state of emergency in August 2003, which was also to deal with wildfires.

(Reporting by Dennis Owen in Kamloops; Writing by Jim Finkle in Toronto; editing by Diane Craft and Mary Milliken)